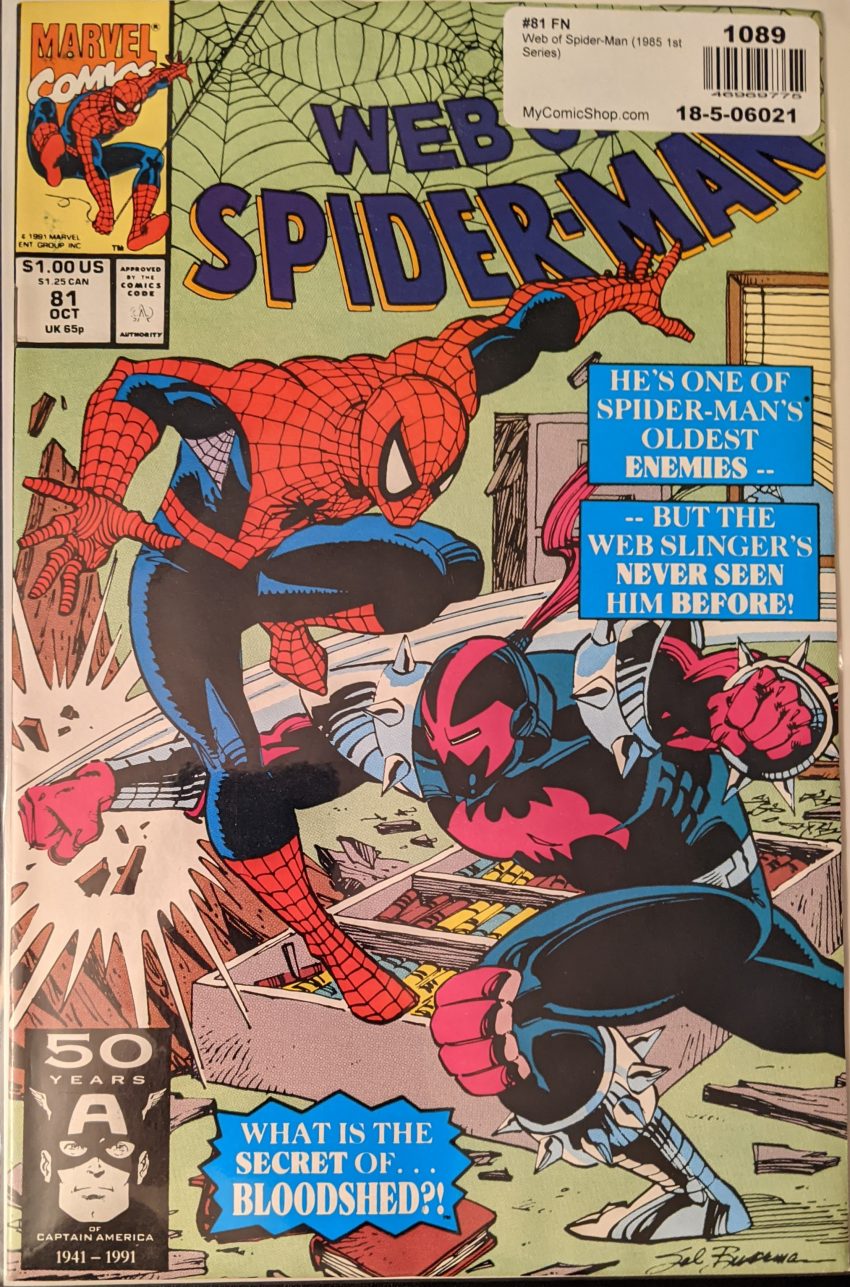 An issue of Web in this era with a Sal Buscema cover is kind of confusing. Makes you double check the title.  Certainly a tantalizing cover. I’ve not read this before, so we’ll see if it lives up to it. A guy covered in spikes named “Bloodshed” is REALLY on-brand for 1991.Actually a little ahead of the curve, I think. The Kill- Death- Blood- names really get out of control in a couple of years as comics as a whole lean into what 13 year old boys think is cool in the early-to-mid 1990s. I think my favorite as far as sheer ridiculousness is one of the lesser known ones, a character at DC called Bloodwynd who turned out to be a brainwashed Martian Manhunter. Bloodwynd! Anyway, this is clearly a fill-in, as the main personnel are all guests. And an interesting array of guests they are: writer Kurt Busiek, penciler Steve Butler, and inkers Don Hudson & Chris Ivy. Is that the Steven Butler who would become the regular artist on this title in several years? If so… hard to tell. Dependable Bob Sharen colors and Spider-Man encounters a couple of guys trying to steal a car.

There is the occasional face that perhaps suggests the Steven Butler I’m familiar with, but not much else. It’s predictably kind of hard to determine if the Steve Butler who drew this comic is the Steven Butler who drew later issues of the same comic online. At any rate, we learn Ricky got a suspended sentence due to his age, stayed in school, and is now a securities trader, but still lives in fear. We’re told that, though the records of minors are sealed, he’s worried someone will recognize him, or that Spider-Man will still come for him one day. That’s a tough way to live. But how much older can he be without violating the sliding time scale? Peter Parker probably isn’t allowed to be over 25, and is probably not that old according to most people in 1991. And, of course, by 1995, we’re told it’s only been 5 years since the 70s. I dunno. I guess best not to think about it. We see that Ricky does his job, but isolates himself from his coworkers and lives below his means.

“Bloodshed” here really is ahead of the curve. He could easily be some crappy Image character 2 years from now. Same name and everything, palling around with Bloodstrike and Blood Wulf and various other Blood people. I’m starting to think this really is that Steven Butler. Out on the street, Ricky sees Spider-Man swing by, and thinking he caught his brother once, calls out  to him. He thinks that was stupid, but then Spidey actually comes back and asks what’s up. But Ricky is even more scared of Spider-Man, and runs away. And “Bloodshed,” watching this exchange from the roof, thinks his brother ratted him out to Spider-Man and drops down on the street, so it’s fightin’ time. Bloodface talks a lot about how he’s dreamed of this and stuff, and Spider-Man, of course, has no idea who he is. When Spidey makes it clear he has no idea who he’s talking to, Bloodman decides to keep it that way.

Spider-Man disappears, sending Bloody into a rage, but also making him leave. Our hero pops up out of a manhole to tag Bloodshed with a tracer, thinking he couldn’t let that rampage continue to endanger people, but he’ll catch up with him and find out what’s going on. Later, we check back in with Ricky, who is despondent. He’s had another visit from his brother, who trashed his apartment and told him if he goes to Spider-Man or the cops or anything, he’ll get worse. Ricky decides to get dinner and think about his problems later, but what he doesn’t know is Spider-Man’s tracer fell off his brother in his wrecked apartment, so…

If this is that Steven Butler… and I am growing more willing to say it is with every page… He drew a way better Spider-Man before he started copying Mark Bagley. Later, Bloodshed smashes into Ricky’s place of business to get his money, which seems like really poor planning on his part, but I guess he’s not too bright. He finds his brother waiting in his office. He tells Wyndell he couldn’t do it, and in fact had the company move all their assets out of the office and into a vault downtown. His brother is very understanding and leaves. Just kidding, he flies into his 5th or 6th rage in 20 pages and prepares to kill his brother, but then Spider-Man comes crashing through the window.

Now that’s how you get Spider-Man hit in spite of his Spider Sense! Good gimmick. The battle rages around the office, with Ricky hoping they just take care of each other and go away so he can stop feeling scared, and Spider-Man off his game due to the injury that opened this fight, allowing Bloodshed to get the upper hand. He really starts to give Spider-Man a beating.

Well, that was a nice ending. Another enjoyable little side trip. Maybe not the most consequential issue, but well done. You can count on Kurt Busiek to do good stuff, even if he’s just dropping by for a fill-in.