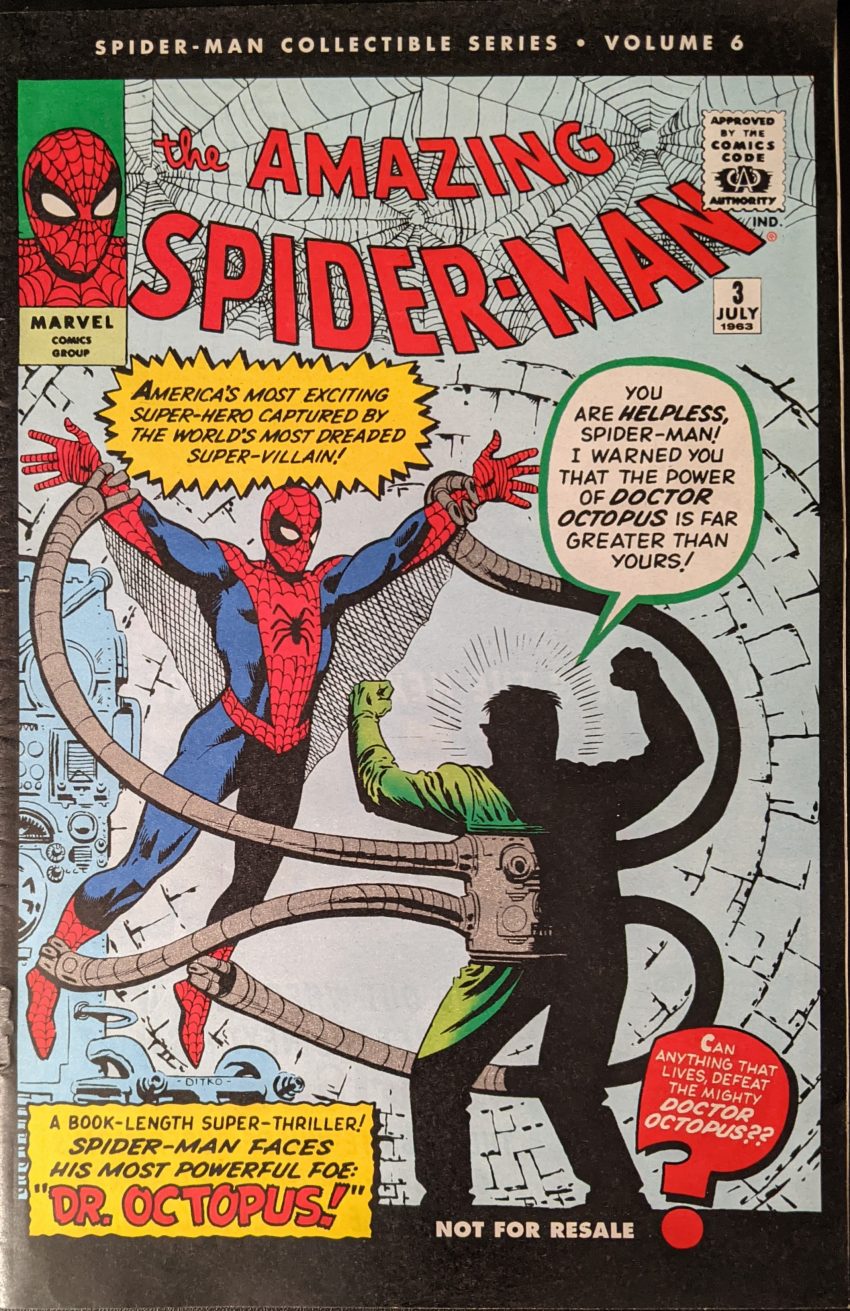 The diabolical debut of Dr. Octopus! The splash calls him “the strangest foe of all time!” and also promises an appearance by The Human Torch.

Stan’s starting to find Spider-Man’s voice. But what of Spidey’s very dumb complaint about needing a more dangerous opponent?

I go whacky sometimes, too. Ock’s invention is actually pretty cool in its original context. Unlike a lot of supervillain science, the benefits and real world applications are obvious.

Another great character, fully formed in 3 pages. He’s a genius, he’s insane, look what those arms can do, and we’re off. The economy of these early stories is really wild sometimes. They were just throwing these things into the ether, with no reason to think they were creating concepts that would last for decades. Peter’s “don’t ask me how I do it” routine all-but screams “I am breaking the law.” Maybe not a great idea. Lucky for him, these are simpler times. Soon enough, Spider-Man is on the scene, scaling the wall of the hospital, thinking to himself how great it is to be Spider-Man (how novel!), and again wishing for a challenge. Peeking in the window, he finds Ock holding several staff members hostage, having forced them to get him equipment to continue his work. He’s about to rough up a protesting doctor when Spidey decides to crash through the window.

Careful what you wish for, buddy. Look at Ock literally just slapping him around. This is pretty stunning defeat for a superhero in this era. Spider-Man crashes through some trees to break his fall before hitting the ground, freaking out because he was so utterly defeated, wondering if this is “the end of Spider-Man.” he sure did a 180. Meanwhile, Ock’s decided to leave the hospital, and ambles over to his old lab, where he bodily throws various people out of the control room of the nuclear plant. He declares himself the strongest man alive, and to prove how powerful he is, decides to “destroy part of this plant and rebuild it” to suit himself. Uh, ok. He starts doing that, making people freak out.

Pretty good place for a break in these reprints.

What on Earth does capturing Doc Ock have to do with talking to these kids? Weird segue. At any rate, our man’s fired up, and thinks if the FF can be defeated and go back for more, so can he. So he heads over to the plant web catapults himself over the fence, and is soon inside. But Ock has security cameras everywhere, and knows immediately. He starts deploying the robotics of the plant against Spidey, but our hero dodges and escapes them all, slowly finding his way to Ock.

Once again, Peter Parker, Science Whiz, is going to save the day. I really wish that hadn’t fallen by the wayside so often.

Ock is far from beaten, blocking Spider-Man’s web with an arm, using the fused ones as a big club, and slinging spidey all over the place, until he finally gets in place to do what will become his time-honored, go-to doc Ock specialty, the ol’ web in the glasses. As Ock frantically tries to get them off, his arms grab Spidey and pull him in close.

Neat & tidy. I’d be pretty confused, too, if I was Johnny. Next time, we get to our first 60s detour to a different title, already. Here’s this issue’s 2nd cover from the reprints, courtesy of Tom Raney: