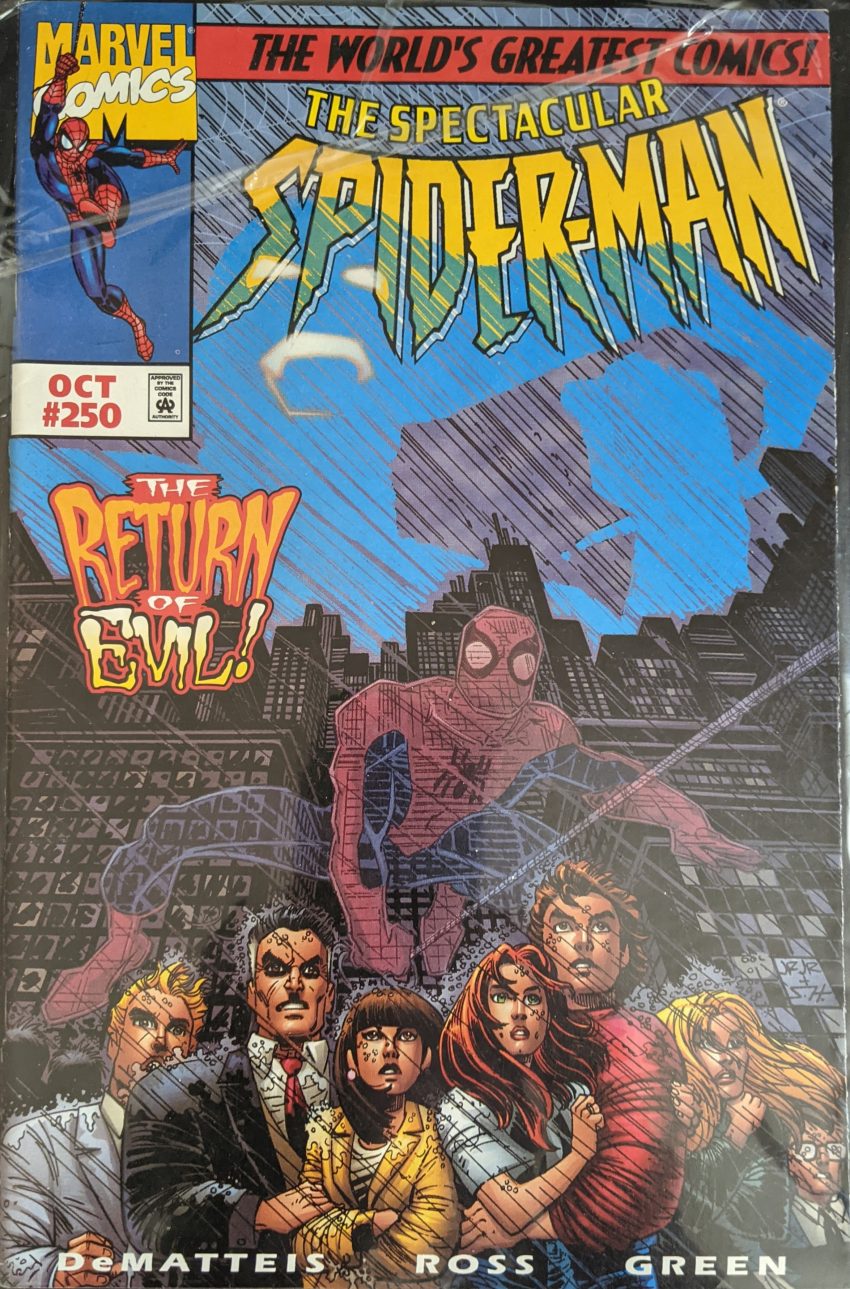 For some reason, we begin here a thing where someone’s decided big Osborn issues have to have Romita covers even if it’s not his book. I mean, I’m not complaining, but it’s an interesting choice. And it worked on me, you’ll note this is the first issue of TAC I bought new in awhile based on the bag stickers. But it’s not just one Romita. For this oversized anniversary issue, they’ve got a pretty weird, double-gatefold cover. The back cover folds out to make a 3-panel triptych with the front…

…while the gatefold on the front reveals more or less the front cover also drawn by John Romita, Sr.

Bit odd! But fun to see side by side. This issue begins on an extreme close-up of The Green Goblin, then a whole page and a half of him wordlessly flying around before I guess stopping near the Parker home and then flying away. Great stuff. Then MJ wakes from a nightmare, grousing about how Peter is never around anymore. Then Betty calls the house at one in the morning, presumably to tell Peter Norman owns The Bugle, but tells a startled MJ instead. Meanwhile, Dr. Kafka and Spider-Man have John Jameson tied to a chair at her place, taking turns recapping their situation at each other.

Ashley Kafka is the worst medical professional in human history. The dudes who believed in trepanning were more trustworthy than she is. The dudes who believed a woman’s womb traveled around her body were more trustworthy than she is. She is so terrible. As Spider-Man and Man-Wolf fight, she rattles off a bunch of DeMatteis psychobabble at him and eventually he turns back to normal. Ugh. At that moment, Norman Osborn has appeared at the office of Oscorp, infuriating and terrifying Liz.

No one ever talks about the real Osborn legacy. That hair is so weird. I hate every word of this. I hate Norman being alive so much. Only bad things have come from it, all through the intervening years, up to right this moment as I type this. The biggest problem I have with it is this is not Norman Osborn. The character is now this international super criminal genius. He was never that before he died. He was just a crazy old man who hated Spider-Man and sometimes wanted to be a mob boss. Now he’s Lex Luthor. A lazy, terrible retcon AND having him act totally out of character? What is there to like about this? But I guess that’s getting ahead of myself. At the hospital, Flash’s newly minted sister shows up, chews him out and prepares to storm off. Why did she even show up? But he begs her to stay and she does, just like that, suddenly on his side now. Because a police detective appears to arrest him for his drunk driving, and the story needs someone to be on his side, I guess. This is all very unpleasant. But wait, there’s even more plots to check in on.

I don’t like anything happening in this title right now, but I’ll give ‘em this, there’s a lot going on. Comics today, yer lucky if you get a single subplot, this comic has like 6 storylines rolling at the same time right now. But, hang on, they’re about to flip the cards.

Ggggrrrrroooooosssss. But, there you have it. This is Alexiei Kravinoff (I don’t care how DeMatteis is spelling it, he’s wrong). Kraven randomly developed an adult child, he was unceremoniously killed off almost immediately, and now he’s gone and got another one. And this isn’t even the last never-before-seen child he’s gonna have over the decades. It’s so lazy, but I guess it’s better than actually bringing him back from the dead. Don’t worry, tho, they do that, too, eventually. Comics, man.

I am a sucker for photo albums in comics. Those little moments with the characters are some of the realest things you can do. Total sucker.MJ thinks “when Gwen fell off that bridge, we all fell with her,” and I am ready to check out of this comic, now, please. She finally goes, “oh, what am I talking about, my life’s pretty cool” so we can truck on over to another scene, labelled two weeks later, as Norman has a press conference to announce he’s reactivating Harry’s charitable arm of the company. Time to expand on the cop out:

Ugh. Also interesting to note SM 75, published 9 months ago, was “just a month ago.”

Wonder who the black haired woman is supposed to be. Best guess is Betty, but I don’t think her hair’s that short right now. Maybe it’s not meant to be anybody. Just someone to cue Robbie’s line. Martha coulda do that, tho. I must say, the cast is suddenly looking a lot more “on model” in this scene.

They got Norman swearing to find the real killers like OJ!

Wait, that was Kafka? How in the world is she close enough to Joe Robertson to call him “Robbie?” They’ve met, like, twice, in passing, as far as I can recall. How John can’t see his dad is completely ruined by this is hard to comprehend. “Did he bully you into it?” Bruh your dad is walking with a cane after being beaten half to death in the building Norman now co-owns, connect ONE dot. JJJ says whatever he’s doing, it’s doing it for John & Martha, out of love. Then we get 2 pages of Flash Thomspon feeling sorry for himself, noting for us he only spent one night in jail, almost drinking a beer, destroying his apartment, and thinking it’s time to have a talk with his dad. Sure, man, whatever. THEN we get some Last Hunt style “naked Kraven fighting animals in a pink room” action, the last thing I’m interesting it. It’s wall-to-wall “no thank you” in this one, baby. Baby Kravey stops the fight after 3 whole pages of it, telling his pets it was just what he needed like they can understand him, then says, “It’s time, at last, to see if the old adage holds true: like father, like son” as he smashes a spider in case you can’t tell what he means. But, uh, wouldn’t that phrasing mean he’s asking “Will Spider-Man drive me to put a shotgun in my mouth, also?” I mean… what? Cut to Norman donating $500,000 to some place that helps people get off drugs, citing Harry’s drug problems as a reason. Really hamming it up.

MJ’s hair is so dark in this scene I wasn’t sure it was her in that random cut away.

Yaaaaay! We’re having so much fun in this 250th anniversary celebration!

Peter finds the bedroom ransacked and a ridiculous Green Goblin action figure holding a sign like it’s Looney Tunes that says “GOTCHA!” Soooo, next page, Spider-Man comes crashing through Norman’s office window and proceeds to beat the crap out of him.

2 page cut to Flash Thompson going to beat up his dad, suddenly feeling remorse standing over his body and leaving. Is that supposed to be symmetry or something? Not working for me.

So, hey, that was basically a Spider-Man & Kingpin encounter, just with a different villain. How fresh. How fun. Loving this. Can’t wait for next issue. I will say, credit where it’s due, the art on this title has been looking better. If Ross would just stop the endless McFarlane impression, it would be pretty reasonable for its time.