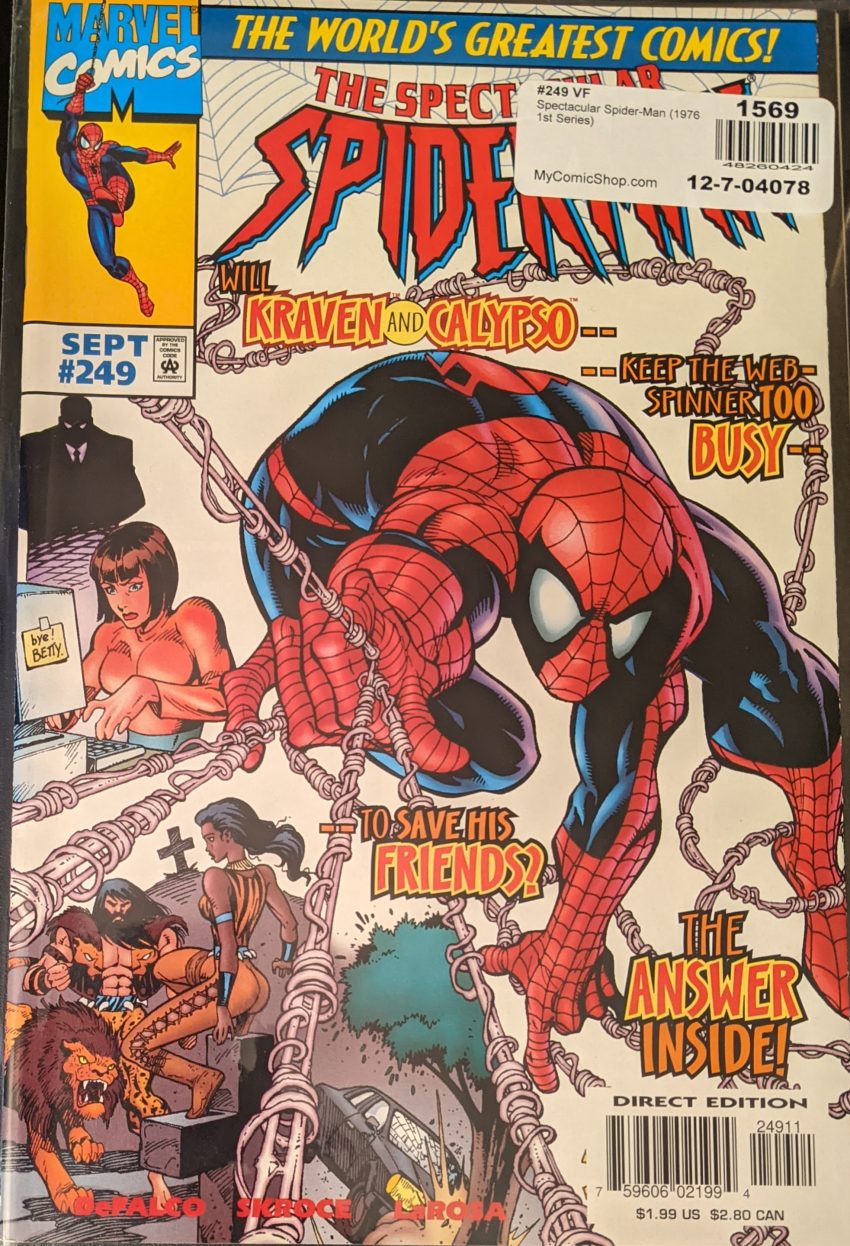 Back for more with Kraven, or is it Kraven? Maybe they’ll get around to turning over their cards, I don’t actually remember when they do. But peep the completely incorrect credits on the cover! Those are ASM credits. This issue is by the usual gang, only with Mark Bernardo scripting over a DeMatteis plot. Wonder why JM hasn’t been available so much lately.

Kraven stands over his grave with a shotgun and a lion on the splash, his narration saying “Kraven the Hunter will never be weak again.”

Is Kraven being literal? Who knows? MJ is frustrated that Peter hasn’t been making enough time for her lately, although that’s really only a plot point in this title, so it feels kinda phony taken in context with all the others. At any rate, she says she needs to know she’s more important than Spider-Man. Fair enough! Meanwhile, JJJ, still in the hospital (Oh man, he has so not been in the hospital in so many comics I’ve read lately), hangs up from a mysterious call as Marla shows up, looking closer to her age, I must say. I mean, not close enough, but she’s gone from looking 17 to looking 25. Baby steps, I guess. Jonah declares he’s ready to go home. Marla finds her book of Shelley poems on his bedside table and asks how it got there, but he says he has no idea with a picture of Jack O’Lantern drawn behind him. Shame none of that’s ever gonna go anywhere. Meanwhile meanwhile, Dr. Kafka wakes in her apartment, which has been trashed, and realizes John is missing. I guess this is more of a direct continuation from last issue than I anticipated. Oh well! What about yet another subplot?

Yes, 66 years into publication, Flash Thompson suddenly develops a sister out of nowhere. I guess it’s not as awkward as Peter Parker’s sister. Spoilers.

That is an INCREDIBLY rude reaction from the newly minted Jessie Thompson! Flash is baring his soul in a rare moment of vulnerability and all she has for him is “you’re drunk?” Sheesh!

I mean, yes, Flash has recently become a drunk out of nowhere, but that doesn’t change the fact that he didn’t deserve that. Ugh, this subplot.

That’s a legit sweet moment for them. They get so few. I know Peter has to always be rushing off to save the day.  Spider-Man has to be metaphorically pushing Peter and his beloved apart and whatever, yadda yadda, but you gotta show the good times to justify MJ putting up with the bad, I think, and writers so rarely did. Peter suspects this is more Kraven nonsense. MJ is indeed by the look in his eyes at first, but almost immediately tells him he can go. Then Luke Ross swipes half a McFarlane Spider-Man from Spider-Man #6:

My curse is I knew that without looking it up. I have somehow memorized almost every Spider-Man I’ve ever seen. For shame, Luke! The thing on a rampage turns out to be a totally feral John Jameson, Man-Wolf on the inside but still John on the outside. As he and Spidey begin to tussle, Betty Brant is working late at The Bugle, as usual, when a figure appears, telling her that her dedication will take her far.

Uh-oh! Spidey swoops down to catch John, wondering if this might have something to do with him being hypnotized by Jack O’Lantern last time he saw him. GEE WHIZ, YOU THINK? John is thrashing around and even biting our hero, so he pops him in the head to knock him out. Kafka runs into the alley they land in, like, instantly, which is totally ridiculous. She explains that this happened due to her doing stereotypical JM DeMatteis psychological stuff to John trying to get through Jack O’Lantern’s mental programming. She says they need to get him back to her place. Spider-Man objects, noting John is so crazed he bit him.

Peter told MJ to wait at the movies and they’d catch a later show. It can’t be more than, like, 15 minutes later. I’m usually on MJ’s side, but this is a bit much. Drunk Flash nearly runs over a child walking his dog in the middle of the street in this tsunami looking storm, because of course he is, but swerves to miss him.

Yup. What a shocking development. I mean, not really, given the business between Osborn and Jack O’Lantern in the previous issue, but you know… supposed to be. More on… all this… next time.