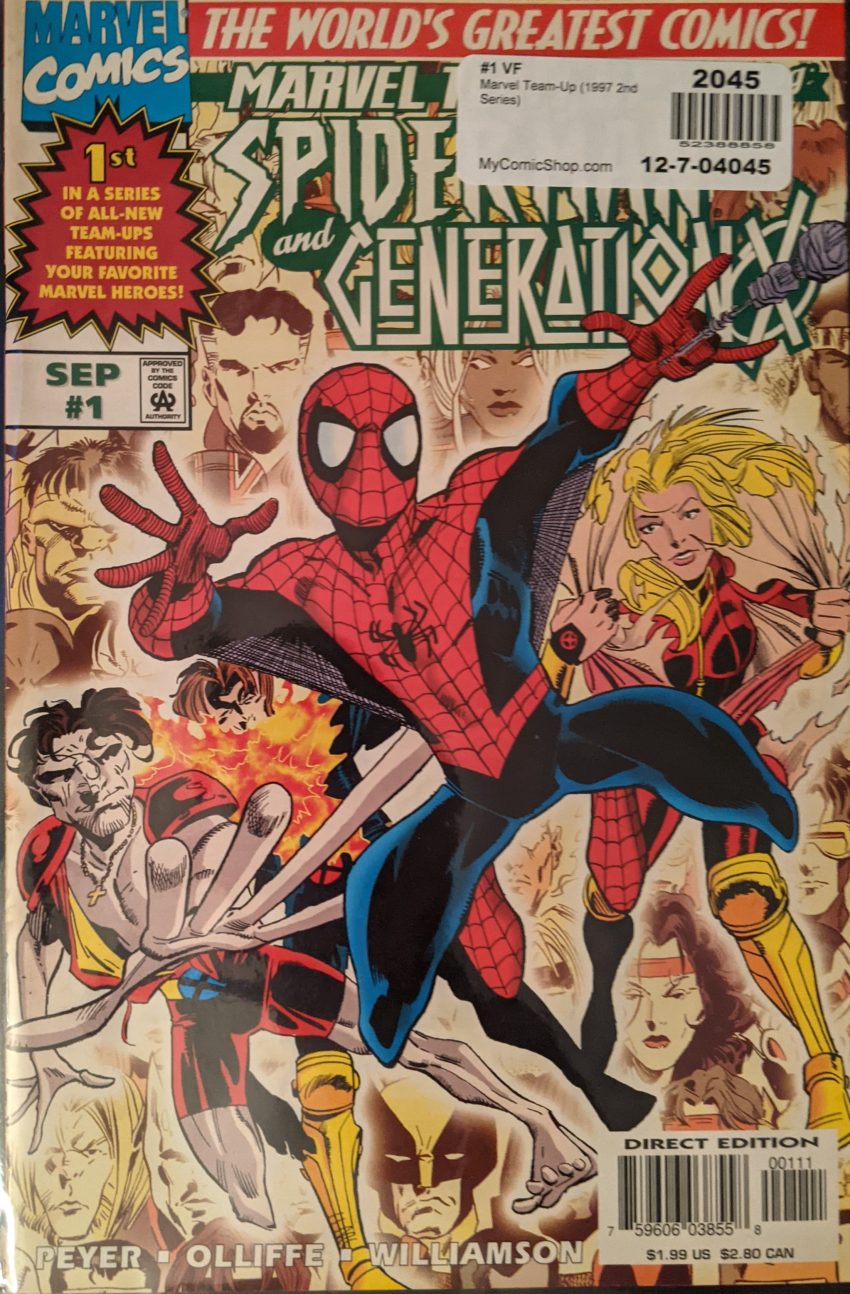 Yes, just 3 months since the cancellation of Spider-Man Team-Up, Marvel Team-Up rides again. Briefly. And the very same month as the end of Untold Tales of Spider-Man, a comic we’ll see elsewhere which was drawn by Pat Olliffe, Pat Olliffe has jumped to another Spider-Title. Either he loves Spider-Man, or editorial loves him on Spider-Man, or both. I feel like he’s got a lot of detractors among fans, but I always enjoyed his stuff in Untold Tales and haven’t seen much of it elsewhere. Including here. I must say ol’ Spidey’s looking kinda wonky. I actually forgot this title existed, and my issues of it are the most recently acquired comics on the blog to date by far. /And we get things started with Generation X! Boy, what a weird gaggle of characters they were. The guy on the left is called Skin. His power is he has too much skin. On the right we have Husk. She literally rips her skin off to become something else underneath at regular intervals. I mean… what? Wild. Husk is also the little sister of Cannonball, who’s appeared on the blog a few times. Anyway, this series is written by Tom Peyer with pencils by Olliffe, inks by the god Al Williamson and colors by Tom Smith. Wonder why Al stopped inking Romita, Jr. I assumed he’d retired or something. Anyway. Story begins with Spider-Man having just defeated some guy, and a note that mentions how this seems like the end of a story, but it’s just beginning. Our man says, “Oooh! Bad luck, Blare! Your crazy sonic bombs just trashed your own pad!”

Olliffe has just spent 2 years drawing the circa 1960s cast, so it’s interesting to see him updating everyone. As Robbie refuses to fire anyone, Peter suggests they send him to LA to cover this, and is kicked out of JJJ’s office. Time to meet our other heroes:

Well, these guys are fun.

Uh, ok. Well, Chamber is British or Irish or Scottish, I don’t remember, and the bottom half of his face is just fire. I’m sure that’ll come up later. I bought, I dunno, 3 issues of Generation X, I am not an expert on them, but this is a pretty high level of bickering. This team is co-parented by Emma Frost, the White Queen, and Banshee, who we’ve seen around here a few times. They have other teammates, but I guess they didn’t want to overcrowd this book. Meanwhile in New York, MJ is not happy Peter wants to max out “their one good credit card” to go to LA based on a newspaper ad, but he says this could be millions of Uncle Bens as Peyer and Olliffe recap his origin real quick just in case you live under a rock, and she relents. So that Blare guy isn’t gonna factor in anymore? What a weird start. Back in LA, the teens are still bickering when an armored car crashes into the railing of an overpass and begins raining cash on the populace. When that inevitably starts to look riot-y, our young heroes get into costume. Except Husk, who tears all her skin off to reveal a new skin made of iron. That’s how she does. It’s maybe the grossest superpower in Marvel history.

Ooooo, we got a mystery man on our hands. Well, according to the gatefold in the front of the issue, that’s “The Authority, a mysterious figure who is gathering information on Spide-rMan and setting up hazardous situations in which the wall-crawler must display his powers and abilities to save innocent lives.” They gave the game away before the story even started! What a weird choice. Spidey and husk go back into the building to look for any more trapped people while Chamber tries to reassure the kid they saved when she gets scared of his fire face. And then the cops show, so they try to get out of sight, and we meet…

Spider-Man raises an uncomfortable point about Husk’s power. Perhaps better not to lampshade it, especially considering she’s supposed to be underage. Chamber destroys the missiles, and then Spider-Man and Skin head across the street to the bad guys. Major Love says the status quo has been killing these people for years, and they’re here to speed it up. That they need to be put out of their misery. Quite a guy. Spidey handily dispatches the goons ad Skin threatens to kill Major Love.

Spidey soon senses the real threat: something is wrong with the money. He guesses it’s been poisoned or irradiated, but whatever it is, it’s gonna kill all the people who were fighting over it earlier. Skin suggests Chamber use the same psychic connection he used to calm the girl earlier to make people feel the sense of danger about the money that Spider-Man does. That’s convoluted, but it’s interesting. Spidey agrees to the scheme.

Huh. A comic sending Spider-Man all over the world is not exactly gonna play nice with the rest of the line. Odd choice. I wonder how long this will go on. I guess we’ll find out at least in part next time.