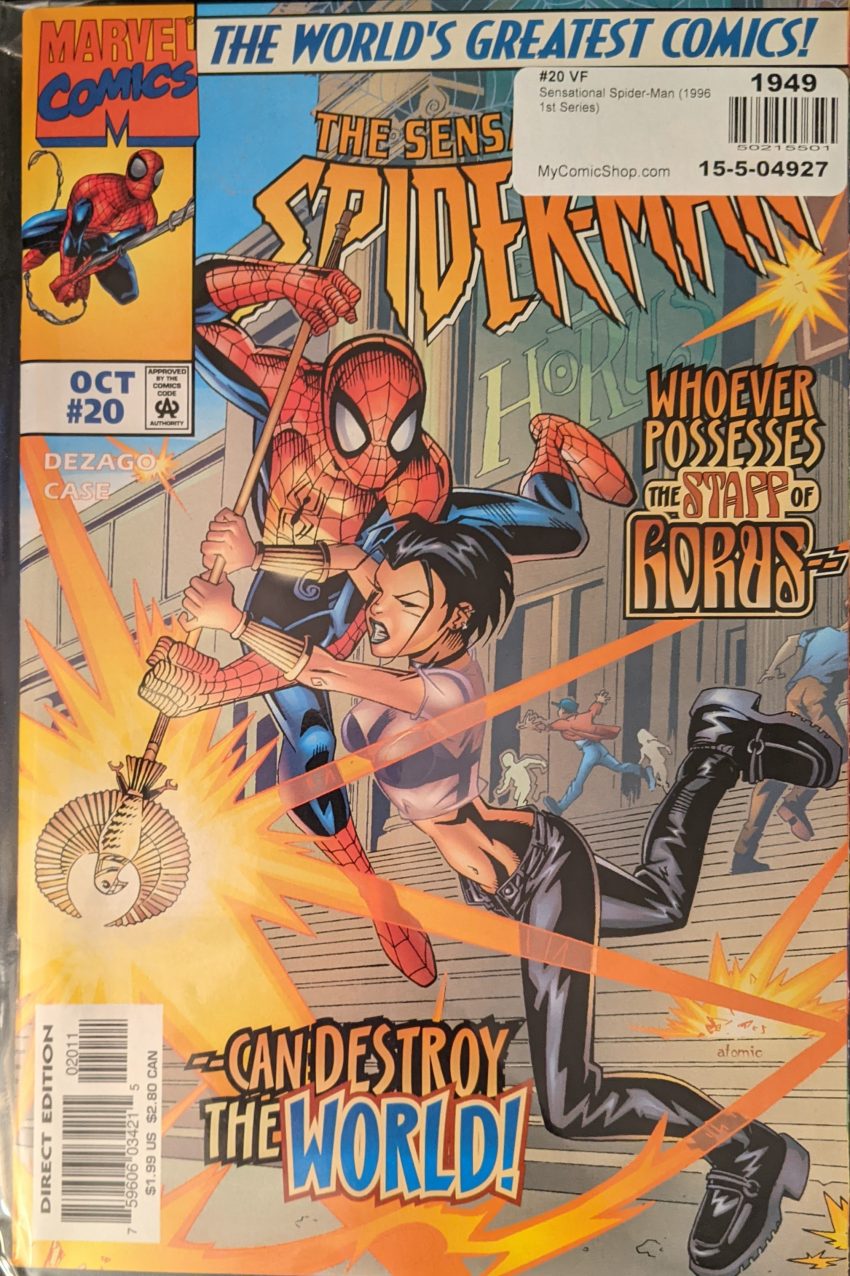 Our new friend Akasha looks remarkably like Nico from 2000s Marvel sleeper hit Runaways on this cover. Nico even has a big magic staff.  Spidey and Akasha quickly catch us up in the page 1 splash, then Spider-Man throws sand in her face and flees while she’s momentarily distracted.

Do not agree with Spider-Man calling her a “chick.” The quotes in that one balloon seem like a mistake.Spider-Man comes blasting out the side of the museum to the shock and dismay of MJ and Akasha’s dad on the ground outside. She comes out after him, and as he falls to the ground prepares for the kill…

Akasha teleports to another part of town, now hearing The Pharaoh’s voice in her head but not controlled by it, trying decide what to do. She gets a look at herself in a window and realizes why people are staring at her. Soon she’s in a clothing store, buying the outfit on the cover, which she says is “so phat,” because Todd DeZago doesn’t want me to enjoy life. She mind controls the clerk and leaves.

Weird page. Meanwhile, Akasha is dancing in a nightclub like she wouldn’t want to go see her dad when The Living Pharaoh has had quite enough, and forces me to see this with my own good eyes:

Todd DeZago must be stopped. I mean, that rap thing & Beck reference may have scarred me. Oh man. The next day, Akasha’s dad has gone to The Daily Bugle instead of the police about his missing daughter, when he runs into Peter, who weirdly tells him she’s not gonna be too hard to find and then just leaves by himself. Some help you are, buddy. He heads down to The East Village because her dad mentioned she loves it there, and uses his Spider Sense to try to find evil thoughts in the crowd. After 20 minutes, we’re told, he gets her. And she notices him noticing her.

Switching to Spider-Man, the element of surprise lets him drop down in front of her and leap away with her staff, assuming it’s the source of her powers. But it is not, and she lets out a blast of energy in all directions just as her dad arrives on the scene to see it. Spidey sees this didn’t work, but also that she really wants her stick back, so he plans to just keep it away from her. But as his webbing disintegrates in her energy field and she shrugs off a punch in the face from him, it looks like he’s going to have a hard time with that. Spidey swings the staff at her and feels it hum much more powerfully, and realizes it’s sort of a power battery for her. He decides that if he breaks it, it might free her. Which makes no sense, but the idea upsets her, so he goes for it, snapping the staff over his knee.

Uh, ok. I wonder if DeZago gets a chance to bring her back before the end of this series. No idea. Hey, whaddaya know, this issue has a letter from a familiar name in the form of soon-to-be-pro comics writer B. Clay Moore. He’s enjoying Sensational and expresses solidarity with a guy who wrote into SSM 16 saying he appreciated them not treating MJ like an object as she so often had been in recent years (Worth noting editorial made fun of that guy for it, but thankfully, they don’t repeat that here). Moore’s big breakthrough will be a crime noir in 2002 called Hawaiian Dick. He & I frequented the same comic book forum for awhile around that time, tho I’m certain he wouldn’t remember me. That’s a fun name to find in the letters.