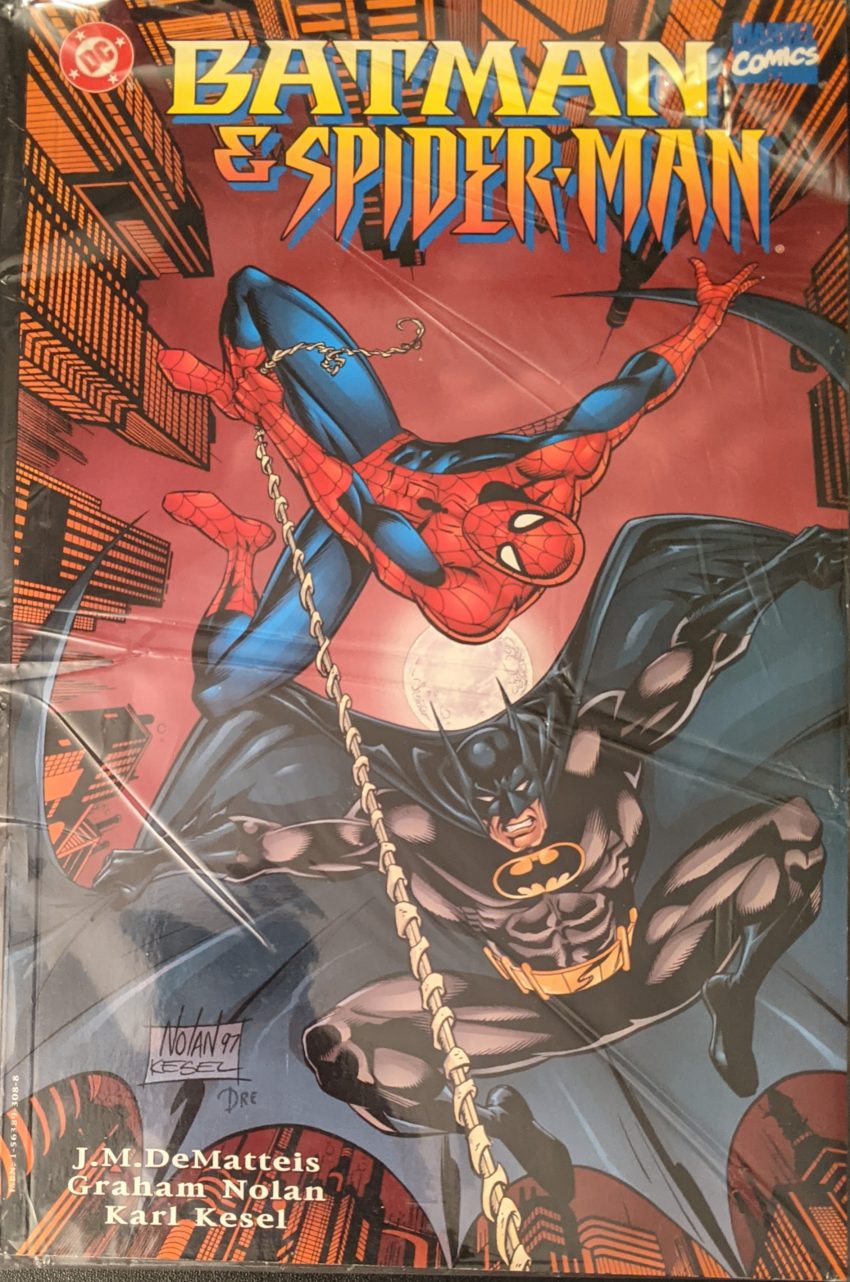 It’s funny this worked out, that the 2 crossovers happened in consecutive blocks despite being almost 2 years apart. And look at that cover, man. Marvel was just smoking DC in art for, like… until like 2012, honestly. DC always had greats, of course. My top 5 dead or alive would have to have Jose Luis Garcia-Lopez in it, and he’s a DC lifer, to name but one example. In the 90s, they had artists I thought were super cool, like Norm Breyfogle and John Bogndanov, whose stuff holds up great today. But generally speaking, DC was always behind the curve. When artists became rock stars for a few years, nobody at DC rode that wave (Tho I think Breyfogle could have… if he’d been at Marvel). Most of the guys I saw at DC were just fine. People were towing the line, maybe not as eager to deviate from the house styles. But more than that, longtime Bat-artist Graham Nolan is doing this baffling, baffling thing here where he’s drawing the Batman of 1997 and the Spider-Man of 1967. And that continues inside the book, too. As the cover says, JM DeMatteis managed to write this one, too. He’s got some history at DC, but that’s still surprising to me, that none of the monthly Batman writers got this gig. Like Spider-Man, Batman was starring in a ton of comics a month, both alone and as a member of one or several teams. Nolan was the long time artist of Detective Comics, inked by one Scott Hanna. Karl Kesel did work for both companies. Colorist Gloria Vasquez’s name is not immediately recognizable to me.

That’d be Talia, his daughter and sometimes starcrossed lover of Batman. At this point, they’ve even had a kid, tho Batman doesn’t know it because it’s a retcon coming in the 2000s courtesy Grant Morrison that leads to the excellent character of Damian Wayne. Meanwhile, in Paris, the oft-exiled Vanessa Fisk is missing her man when he appears on the street, quoting poetry at her.

I mean Marvel 1997 wouldn’t let Graham Nolan touch a Spider-Man comic if he offered to work for free. And I get it to an extent. He’s a DC guy, and while he has his fans, he’s no superstar. He probably knows this is his one and only chance to draw Spider-Man, and he’s drawing the Spider-Man he loves instead of the flavor of the moment. I’m sure I’d want to do the same thing. But it still looks embarrassingly dated when viewed through the lens of a 1997 reader, which I was. In a world of Todd McFarlanes and Joe Madureiras, this was ridiculous. Spidey finishes beating up all the goons and notes they, too, have The Demon’s Head tattooed on their palms. Then we jump back to Gotham, where we find Batman on his way to see Talia.

Talia admits the goons were just going through the motions of an assassination attempt so she could get away with seeing him. He timidly asks her if she’d leave her father for him, and she throws a smoke bomb and disappears. And then we jump ahead some amount of time to her meeting with The Kingpin. Specifically, John Romita, Sr.’s Kingpin, because Nolan just wants to do the classics. Talia lets us know their organizations have been doing some mutually beneficial business, then they dismiss their goons so they can talk.

Fisk tells her he knows he’s been dealing with terrorists, and declines her offer, saying they now that they’ve “imported their madness” into his city, the deal is off. But Vanessa says they’re not terrorists, and that they’re offering resurrection. Big word for ol’ Wilson. And then we see who’s watching them, and, inevitably, it’s…

They made a half-hearted attempt to reconcile Spider-Man/Batman with DC Vs. Marvel, but now seem to have once again reverted to the idea that they live in the same world. Next page, we see Vanessa in bed, dying of cancer. I have no idea when the page of her previously is meant to have taken place. She’s hanging in there, but not for long, and when the doctor tells Fisk that, he kills the guy. Nice. Then Talia rolls in, and Fisk is even more enraged that she’s come to his sanctum uninvited, but she says her “employer” can save Vanessa.

Talia says they’re going to sink the island of Manhattan. Fisk, to his credit, laughs in Talia’s face, and simply tells her any move against his organization will be seen as a declaration of war. She reiterates that they can cure Vanessa, but is still shown the door. Spidey tells Batman he has to go check in with his real life as Wilson returns to Vanessa’s bedside and sits there for a long time before picking up the phone. As the TV pastor guy from the beginning rants some more about how “he” is coming, Kingpin, Vanessa, and some goons are on a plane to Tibet. Vanessa doesn’t believe anything Wilson tells her about a cure for cancer or Ra’s reportedly being hundreds of years old, but he’s adamant. She doesn’t like the idea of what Wilson must be doing in exchange, but then they’ve arrived.

They mop up the goons, but not before the villains can get in a helicopter. Batman hasn’t thought to bring one of his various aircraft, so our guys have to try to follow on foot. In the snow and everything. At Ra’s’ base, Talia & Vanessa have a chat about loving men whose careers they can’t stand, while Ra’s and Kingpin discuss how Kingpin reminds Ra’s of his younger self, and how he’s gonna help the much older man. Meanwhile, Spider-Man & Batman have arrived in the general area, and Bats has a map of some tunnels he says will take them into Ra’s’ valley.

Spidey is knocked unconscious in the fall, so Batman picks him up and carries him into the aforementioned caves. Back at the base, Ra’s officially tells Kingpin he wants him to be one of his regional rulers once he’s taken over the world. Fisk says he lured him all the way out here not to cure Vanessa, but for this.

Fisk accepts the deal. Meanwhile, Spider-Man awakes from a nightmare of MJ drowning as Manhattan sinks. Batman assures him he was only out for a few minutes, but Spidey is spurred to hurry by his dream. And it turns out that instinct is correct, as Ra’s reveals his explosives are already in place, and all he has to do is send a signal to his satellites to begin the destruction of New York. Part of luring Fisk here was making sure he lived. He says he’ll give Vanessa the cure after Fisk proves his loyalty by typing in the code that will destroy New York himself. But a web stops him, and Spider-Man starts makin’ with the jokes and he leaps into action.

Fisk presses the button, and they all watch Ra’s’ satellite explode. Spider-Man says someone must’ve reprogrammed their computer as Batman arrives with Vanessa.

Ooook. Talia tells Batman that she stays with her father for the same reason she loves him, because she chooses to. We’re told that Kingpin turns over all his info on Ra’s to the FBI, allowing him to get away clean, but when they raid the compound days later, it is, of course, abandoned. Back in New York, Fisk sits with his ailing wife…

This comic seemed… particularly inconsequential. Some real boilerplate stuff. And precious little superheroing. Somehow, even as an extra-long comic, it felt like precious little anything happened. Their first meeting might not have been essential reading, but it at least had a pulse to it. Maybe this was DeMatteis writing what he thought DC was looking for, I dunno. They did tend to be the stuffier of the 2 companies (Until Dan Didio came into power and decided what they should do to finally beat Marvel is make their comics childishly dark and hyper-violent). Ah, well. A far less exciting package than the previous meeting all around. And as most likely the last time these 2 will ever share a book, that’s a shame.