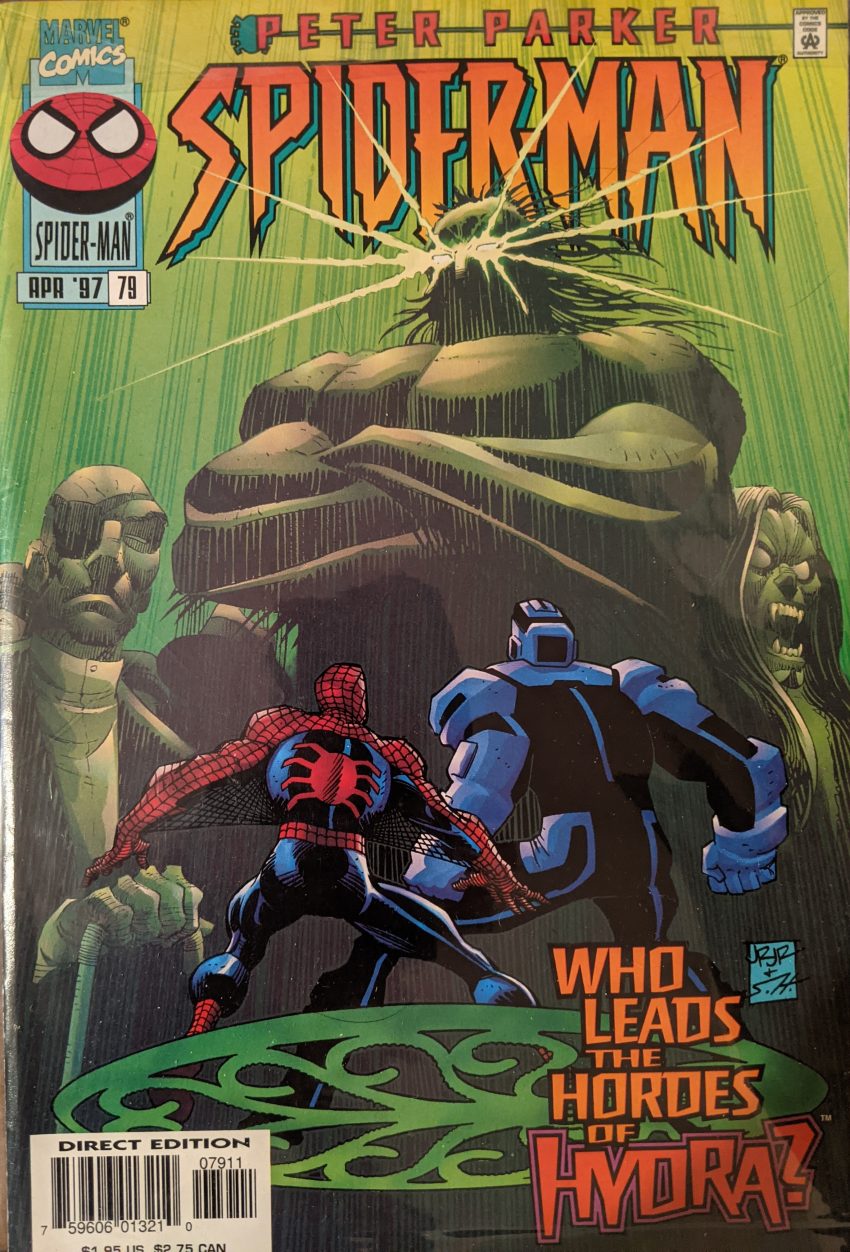 So, it’s not labelled as such, but apparently this is part 3 of a 4 part story with SM 77-80. Whoops. Been quite some time since we see 77 & 78. At any rate, we are back with, hands down, the best Spider-Man creative team of the period, Howard Mackie, John Romita, Jr., Scott Hanna & Gregory Wright. Spider-Man recently met the very difficult to draw new hero SHOC and his nemesis, Crown, and fought Morbius, and the Ben Reilly Spider-Man fought Hydra and Don Fortunato in SM 74, , and it’s all comin’ together here.

Caribbean or no, that doesn’t seem like appropriate laboratory attire.

Romita, Jr. is 2nd only to Kirby in drawing big, insane machinery.

Egads. Crown is in league with Hydra, and now they have Morbius! Kinda weird choices, really. In the “let’s all please move on from The Clone Saga as fast as possible” era, Mackie’s like “Hang on, gotta go back to my Hyrda thing.” Meanwhile, in New York, Betty Brant is burning the midnight oil on some stories, trying not to think about Flash being a jerk, when JJJ strolls up and hands her a big story, telling her to drop her others. She’s taken aback, says it’s something he’d usually give Ben Urich. But he says she’s ready for it, and her plane leaves in the morning. The next day, Spider-Man enters the scene, late for class and narrating to himself about it in traditional fashion, when…

The use of the Star Trek font there is strange. SHOC just drops Spidey on solid ground and leaves, saying he’s in a hurry. What a lucky break for our hero, who is shaken. He has no idea what made him fall out of the sky, and he’s worried. Meanwhile meanwhile, we cut to the estate of Don Fortunato, to which Crown and Dr. Janson have delivered Morbius. This wasn’t actually the plan, and Fortunato is not amused, but they think Janson has discovered something in Morbius’ blood that will server the bossman’s mysterious cause. So he allows it, while also telling Crown that sources in The State Department have given them a line on SHOC’s alter ego, and to go get him.

Oh ho, a real Nazi. I don’t actually remember who that is. One assumes Baron Strucker, but that also seems obvious.

Man, this scene was… doing a lot! Neal asks, rather astutely, if that Paul is Peter’s tutor, and Peter is Neal’s tutor, what’s that make Paul to him, but Peter brushes it off. Betty exits stage left to go appear in Spider-Man Unlimited 16, and after Peter & Neal have coffee and Neal expresses an interest in Betty, Peter has a dizzy spell and has to stop for a moment. And while he does, the sky goes dark. Too dark, and crackling with energy. Peter and Neal both give flimsy excuses to go switch identities, but Peter can’t shake his dizziness. He’s approached by Abby Levin, who, as Abby Levine, was a bit player in SM 75, and reminds him they had classes together. This is weird. Then black goo starts dripping out of the sky and weird super goons fill the streets, so it’s time for action.

“The only new guy to appear in the cast recently is the new hero in town????” I mean, it wouldn’t be that cut & dried for Peter, but it seems funny as the reader.  SHOC handily deals with the goons and politely asks Peter to forget he saw this, which is pretty funny, but then Crown shows up. Neal reminds us all Crown killed his dad, and then Crown takes Peter hostage. SHOC says a couple of weeks ago he might’ve just let Peter die because the stakes are so high, but now he’s met Mary Jane…

Weirdly, Abby Levin(e) will never appear in a comic again. They just needed someone to stand on that street, I guess. All this comes to a head next issue. This issue’s letter column is a highly unusual 4 pages of reactions to SM 75 running the gamut. Joy, rage, disbelief, relief, several threats to quit buying comics, several assurances of a return to buying Spider-Man, the works. Delight and disgust at the return of Norman. One guy astutely surmises Norman’s return was a last minute idea to wrap things up. Others thought it was a great idea. One guy thought it was the best Spider-Man/Green Goblin fight of all time, which… I mean, come on. One guy actually mailed a letter including the sentence “My rage towards you guys is unspeakable!” One lady says, as a mother, she can’t keep reading the book unless Peter & MJ find little May. One guy says he started reading comics because of Ben Reilly. Another delusional soul calls Ben Reilly “the coolest, most interesting character in Marvel’s history.” More level-headed folks note that, no matter where you stand on him, Ben’s death was kinda disappointing. And, not to retread past material, but that’s the thing. They say every comic is somebody’s first. This terrible ending was to those poor, sad Ben Reilly fans what his very existence was to us older folks. No one won with The Clone Saga.