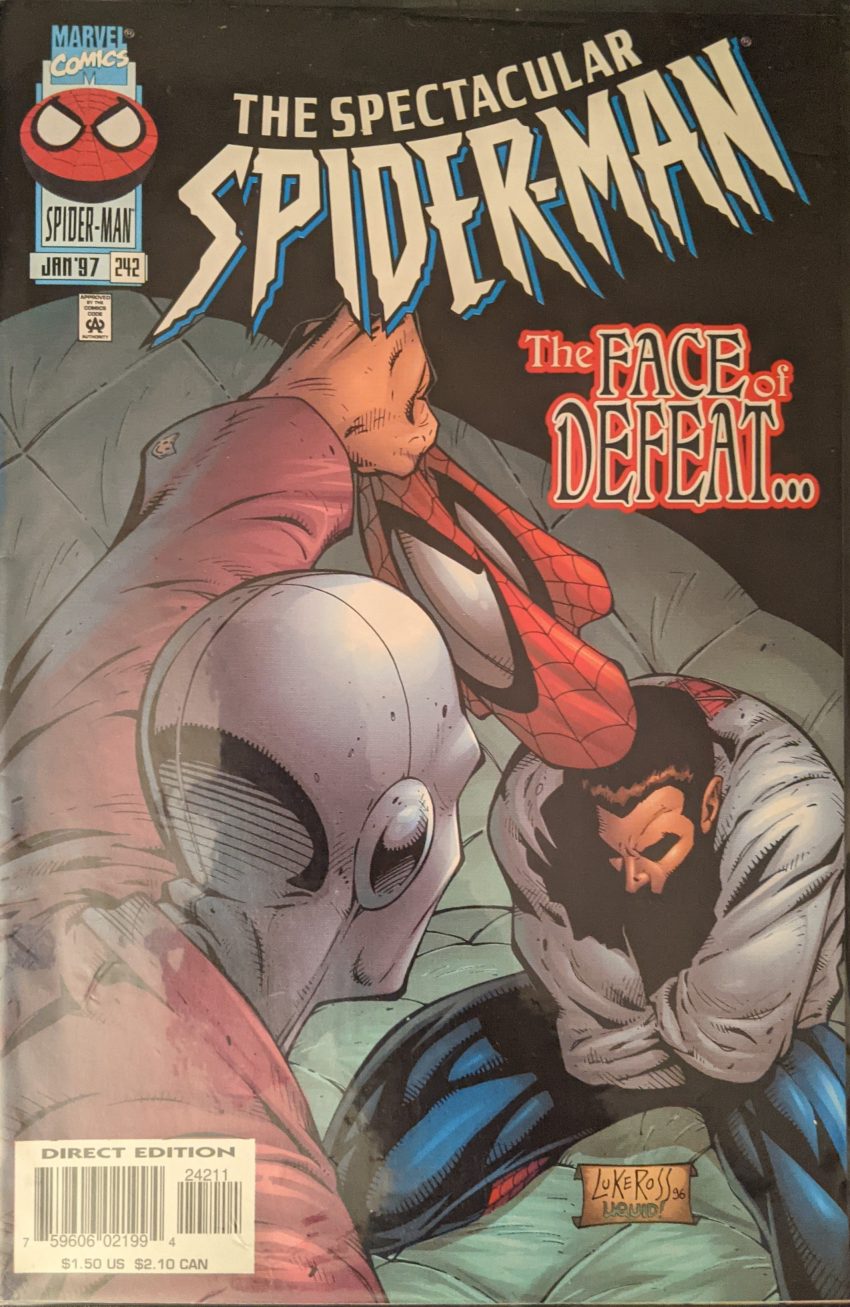 And we’re back to very late 1996, almost 1997. This may not be my favorite period for the books, but it is really freeing to think I won’t ever have to think about Ben Reilly again, or see his ugly Spider-Man costume, or The Scarlet Spider or any of that. Now I just have to deal with not liking 2 out of 4 pencilers and 3 out of 4 writers… Yay. Starting with one of each as we return to JM DeMatteis and Luke Ross on Spectacular. Also John Stanisci on inks and John CKalisz on colors. Ya know, it just occurred to me that all the Scarlet Spider books were on nice paper, and now it’s back to cheap newsprint. Jazz up the worst things you ever published, I guess. Anyway. This one opens with a Kangaroo bounding down the street in the snow yelling about how he’s New York’s worst nightmare and such only to be knocked out in one punch by Spider-Man, who says he wishes he had more days like this.

And a very jarring transition on the next page:

Sure not the Dr. Kafka from her introduction in TAC 178. Oh, and Dimitri grabs Kakfa and smashes her into a wall and begins choking her, because trying to rehabilitate these guys is stupid. But we cut away to Peter, MJ, Liz and Flash out to dinner. They seem to be having a pleasant time, except Flash is getting drunk really fast and talking about how he likes the past better than the present.

Somehow, Liz & Foggy is a shock to me every time. Flash rejects Peter’s attempt to lend an ear and abandons the group. So Peter gives MJ an excuse, switches to Spider-Man, and drops in on the one-time president of his fanclub. He picks up Flash and tells him what his support has always meant to him and he runs him up the side of a building, and says how seeing him looking so sad prompted him to talk. He asks Flash what’s going on.

Marla Madison looking young enough to be JJJ’s granddaughter there. Comic artists, man, especially in this era. No range. JJJ reading romantic verse is a funny turn, tho. But, as the suddenly 17-year old Marla falls into his arms, he hears a noise and freaks out. Despite her protests, he insists someone is outside and that people want him dead.

Dr. Kafka and John take off in a van, Kafka saying she knows where Chameleon is going and hoping they can cut him off. But then she tells him to give her a gun, because she’s the only one Chameleon will let get close to him, and she wants protection. And the dumby agrees, so she shoot shim, because she’s The Chameleon, obviously.

I don’t remember this at all. Flash sure got stuck in the same plot, didn’t he? He’s been washed up and depressed and then bounced back and repeated more times than I can count for like 15 years, at this point. Spidey hopes he got through to Flash, and wonders if there’s anything he and MJ can do to help him out when his Spider Sense goes off. He sees Dr. Octopus, the dead one, dangling Peter Parker off of a nearby rooftop. He mentions that Ock is dead and he knows where Peter is, and Peter is furious. Spider-Man wonders if it’s a clone before dismissing that as too farfetched. How many lampshades can you fit on a single lamp? Spidey lunges for Octopus, who turns out to be a hologram or something, and dives right into the side of a chimney. Peter says he didn’t know Doc Ock is dead as he reverts to Chameleon.

Why would you base the cover on literally the last page of the book? Dumb, but not uncommon. No idea where this is going, don’t remember a bit. But I guess we’ll see.