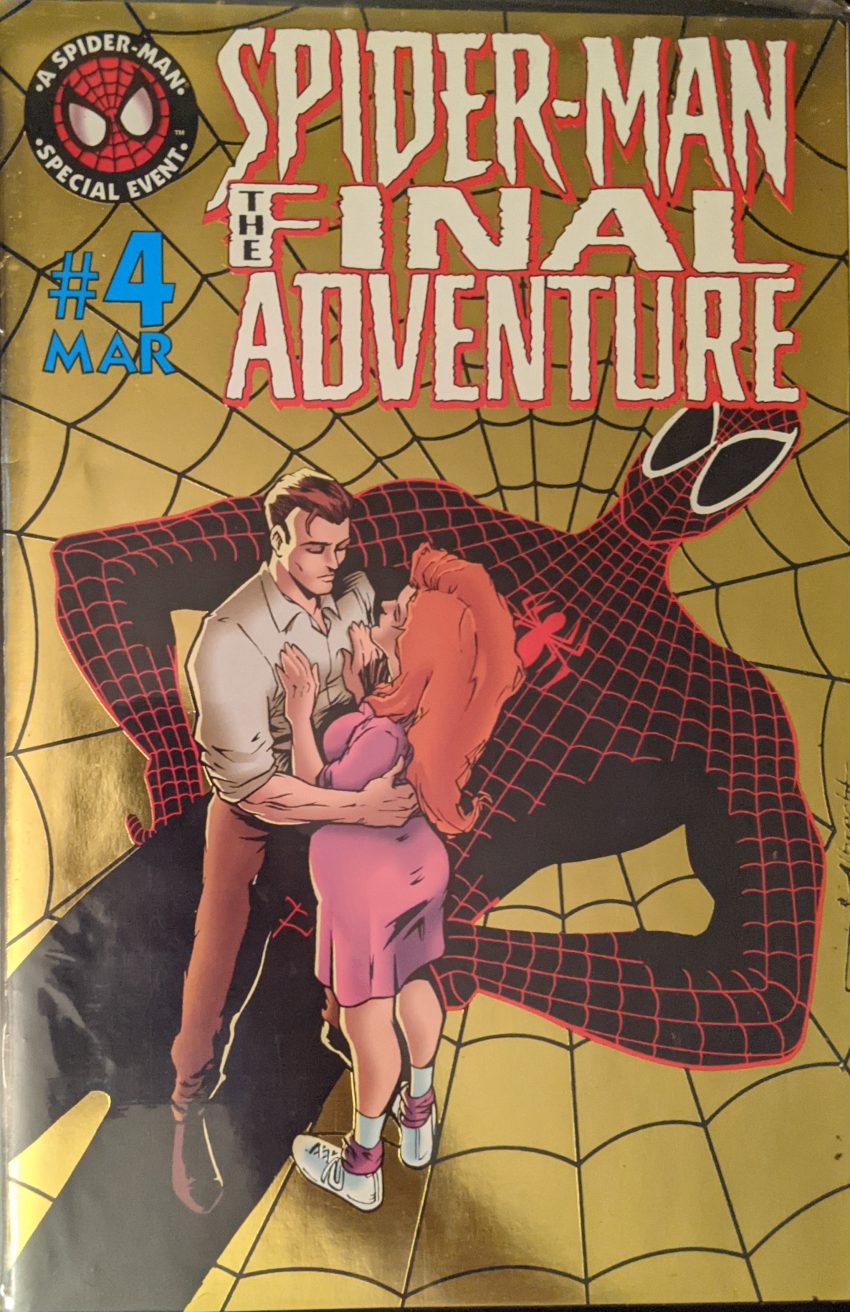 Shiny yellow for the finale. This month, Jeff Albrecth is joined by Greg Adams and Chris Ivy on inks. We open on MJ asking Ellis if his headline is supposed to scare her.

No memory of this. Back in Portland, Spider-Man swings around, recapping the rest of the series furiously as he uses a tracker he whipped up to hone in on Verys, who’s at The Governor Hotel doing this:

Pretty lame “final villain” for Spider-Man, here. Verys flees, saying Spidey can either chase him or save the girl, the classic villain escape. But once the girl’s safe, our man heads out after Verys immediately. And we head to New York, where Robbie is doing a press check at The Bugle when MJ arrives.

Robbie’s up to somethin’. Back in Portland, Spidey gets a fix on Verys again, but then Contoni shows up to fight him. And Spidey calls him “Dryrot.” That’s what one of the GARID guys called him in #2, but why does he have a supervillain name? That’s just rude. He’s just a guy who got dealt a bad hand, he’s not a bad guy. He is, in fact, a good guy, trying to help, but his interference lets Verys escape briefly. But then he’s reformed and attacking Spider-Man.

Again, for a “final adventure,” this is kind of lame. The thingie seems ot have worked, reverting both monsters to human form, so Spidey cuts out, hoping to get back to work and change back to Peter before the rest of the gang can bring back their former monsters. Back in NY…

Really? That’s how they do this? That’s pretty awful. In a much better sequence, Robbie goes to see Ellis, who says they can spike his story, but they can’t stop him from selling it elsewhere. So Robbie calls his counterpart at The Daily Globe for him, and hands the phone to Ellis. But Ellis gets told if Robbie passed on a story, The Globe doesn’t want it, either. Robbie gives Ellis numbers for a few other papers and Esquire, but it’s clear it’ll be the same everywhere. Ellis’ story is dead in the water on the strength on Robbie’s reputation, which is actually kinda cool.

Robbie is the best. I always like a story where he gets to shine. Back in Portland, everyone’s back at GARID, and the monster men are on tables, ready to be fixed. Between Peter’s process and the radiation from the machine that gave him his powers, they expect to be able to both cure the men’s necrotizing fasciitis and revert them to normal human form. Scwhinner is made to give a long pseudo-science explanation of this to the cops, but who really cares? The point is, Verys wakes up and starts trying to wreck the process.

And there it is. Peter loses his powers. Forever! Ish. And saves a man from a life not worth living in the process. Not bad. Suitably heroic. Peter is home later, narrating that the changes to his mRNA that give him powers are still there, but in remission, rendering him human. This was very deliberately giving them a way to bring his powers back later without it seeming like as much of a cop out. He’s wondering what he would’ve done if he had more control over the situation as he packs up his Spider-Man costume when MJ returns.

Oh, ok. Totally forgot that swerve. The idea that her note was so short did strike me as odd, but that wasn’t the whole note, ok. That’s better.

A nice enough ending. Ken Ellis still seems to know Peter is Spider-Man, but he won’t appear in many more comics, so I guess that doesn’t matter. Fabian would snag him again in the issue of Deadpool where he and Spider-Man meet for the first time several years hence, actually, but his days are numbered in comics. And Peter & MJ get to ride off into the sunset. And they lived happily ever after. Just kidding. This issue published the same month Pete & MJ returned to the main titles. That is just so funny to me. “THE END. We’re DONE. Uh, whoops, just kidding!” That’s how fast things changed behind the scenes. Not only that, but this issue’s original ending, and in a way, its original reason for being, was MJ having her child. Then, while the series was in production, they decided Peter would become Spider-Man again, so he absolutely couldn’t be a dad. They briefly wanted MJ to miscarry as the end, instead, but that was vetoed. And then the ending we just saw was vetoed, to be replaced with Peter just mailing Ben his Spider-Man costume (Despite, you know, him leaving it with Ben in TAC 229, which is a real problem for this whole series). Not much of an ending. But when Fabian threatened to quit if he couldn’t have the power loss, it was reinstated, and here we are. All that in the time it took to produce 4 comics! What a nightmare it must’ve been to work on Spider-Man in 1995-1996. But with this, the nightmare is over. For me, anyway. Weird to see this part last, but that’s how it goes. I am not sad to bid farewell to this dumb era. But… now we shuffle off to more of the dumb era that followed…