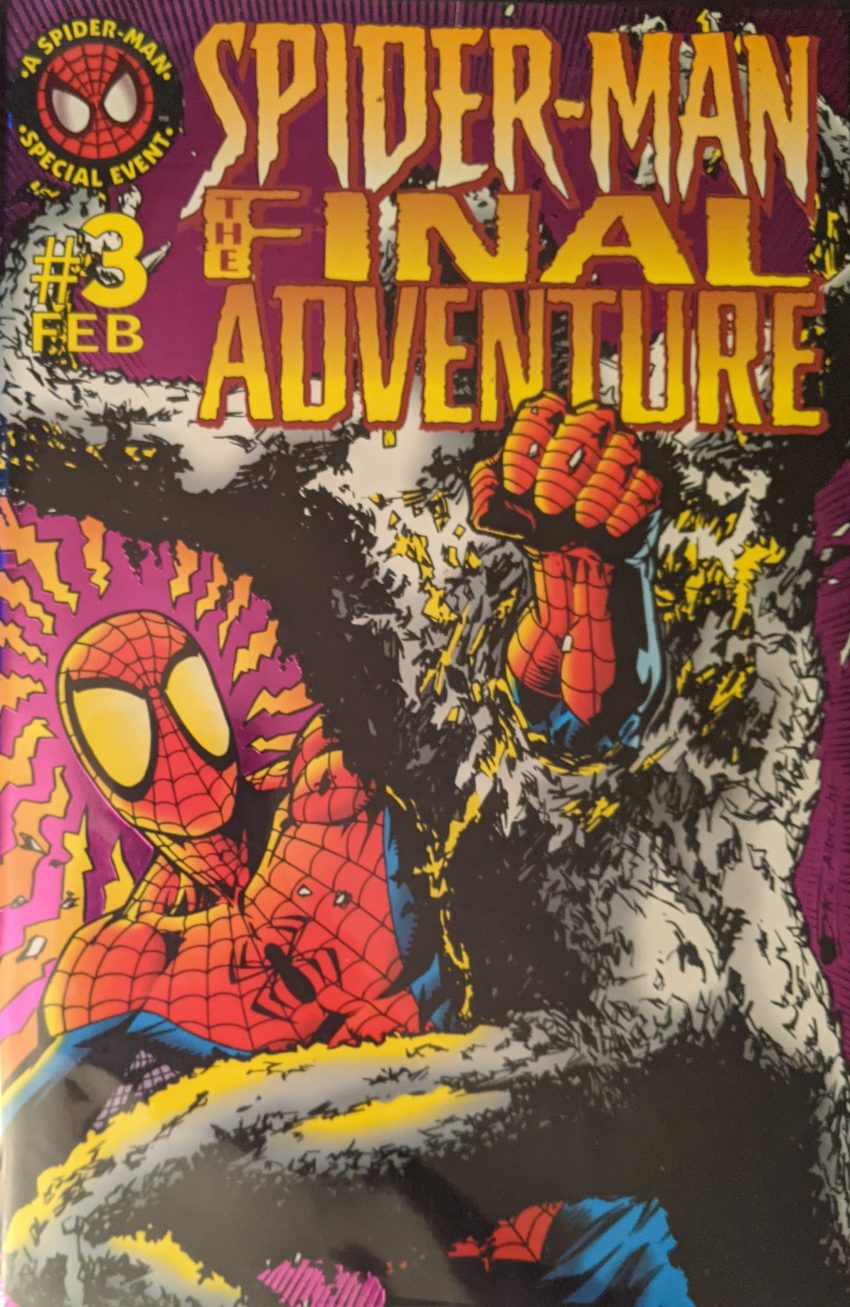 This month’s expensive, shiny color is: pink! Just punchin’ right through a dude. All the dithering behind the scenes on this series pushed the art closer to the deadline each month, so this issue brings in a 2nd inker, Arne Starr, with more personnel to come next time. It’s sunrise, and Spider-Man is just getting home after a night looking for Tendril. Also, he knows MJ left him, and he’s sad, but he’s still looking for Tendril instead of trying to fix that. He checks the machine and hears a message from Ken Ellis, but also one from Cal Falconer at work, letting him know he’s late.

In this era where we’ve seen all these comic book “artists” getting in because they could draw a 5th rate approximation of Todd McFarlane’s Spider-Man and literally nothing else, it’s pretty refreshing to be with an artist who’s so good at regular people. Even a lot of the actual professionals of this era couldn’t hit that mark too well. Peter spending this series beating himself up for the creation of Tendril but being that cavalier about the death of Staphos is very jarring.

As usual, really do not care for “I had a bad childhood so I hate the world” backstories. It’s lazy and pretty hurtful to real people reading. Oh, hang on.

Hard to believe a perpetually cash-strapped family like The Parkers is holding onto Aunt May’s house when no one’s usually living in it. Did MJ have to get power and water turned back on? ALso in New York, Ken Ellis talks to himself to let us know Robbie refused to send him to Portland, so he’s going to harass anyone he can find who’s had dealings with Spider-Man, starting with Betty Brant. This subplot doesn’t seem like it’s moving fast enough for a series that’s almost over. Meanwhile, Peter & Cal drive out to this Paul Contoni’s house, which, once they get there, we see is very nice. Paul looks like a pile of mold, tho, and remembers Cal when he knocks on the door. He’s heard about the killings and asks if GARID is responsible.

Cal’s not gonna take no for an answer, but Peter talks him down and gets him to leave. But he also thinks Contoni will be getting a visit from Spider-Man tonight. Back in New York, Ken Ellis is plying Betty for info about her and Peter’s youth together, and connecting some dots in her story of how Peter once impersonated Spider-Man and how Spider-Man stopped being a TV personality and became a crimefighter around the time Peter’s uncle died. In the 80s, there was a very famous story where Ben Urich figures out who Daredevil is, but can’t bring himself to write the story and ruin his life. A lot of people assume he’s figured out Peter, too. This is like the evil opposite of that. While Ken’s trying to ruin Peter’s life, MJ is… doing her modeling gig with the same dudes she’d been working with. How does that work? Was she always going to be flying back East for this? If so, why’d she act like it was so weird to be in May’s house? Very confusing. She’s not having a good time, though, because she can’t believe Peter hasn’t contacted her yet. Me, neither, MJ!

Back at The Bugle, Ellis & Betty return from lunch. Ellis goes to see Robbie, who points out Ellis is completely ignoring a story he’s been assigned to harass Peter.

Good times. Much later, Spider-Man has driven back out to Contoni’s place, now that it’s night. And he finds him out in the woods, fighting a bear. I mean, we all need hobbies. Spidey tries to reason with Contoni, saying he may not want to help GARID, but “people like us” don’t have a choice. When that gets his attention, Spidey explains that he may not look like Contoni on the outside, but he’s similar to Verys on the inside, and Verys is similar to Contoni on the outside. He really says it like that. This is almost working until he reveals he’s got a baby on the way and wants ot make sure it doesn’t turn into something like Contoni. Smooth. He gets swept away in the weird mess of Contoni’s body for that one.

The whole “wife left” thing doesn’t seem to be hitting Peter like it should. Still, nice to see him trying to help someone in a nonviolent way. We cut to Verys taking another victim under Peter’s narration about trying to wrap this up and get his family back, and then we’re back to NY, where Ben Reilly has stopped by to see MJ. This is… problematic… considering I’m pretty sure they hadn’t seen each other since Pete & MJ left town when they came back to the main books in TAC 232 (Published NEXT MONTH, alongside The Final Adventure #4!). MJ says his hair choices surprised her.

I get the idea that Ellis is ambitious and wants a story that will make him famous, but what’s with being such a jerk about it? “Hi, just stopped by to say I’m trying to ruin your life! In the middle of the night, even!” Back in Portland, the boys are working late at GARID, working to fix Contoni and find a way to fix Verys. Peter mentions he’s been feeling bad since he fought Verys and has rechecked his own DNA, and hasn’t liked what he found, but he’s too busy to worry about that.

Gasp. If you don’t read everything that comes after this first, perhaps a shock ending. I don’t know, really. Even in this context, even if Peter & MJ really were being sent off to live happily ever after and not come back, would anyone really buy Peter being depowered FOREVER? Comic fans are cynical. I guess maybe less so in 1995, before literally everyone had died and come back several times (Though the move to that is underway in Spidey, for sure). I just don’t know.