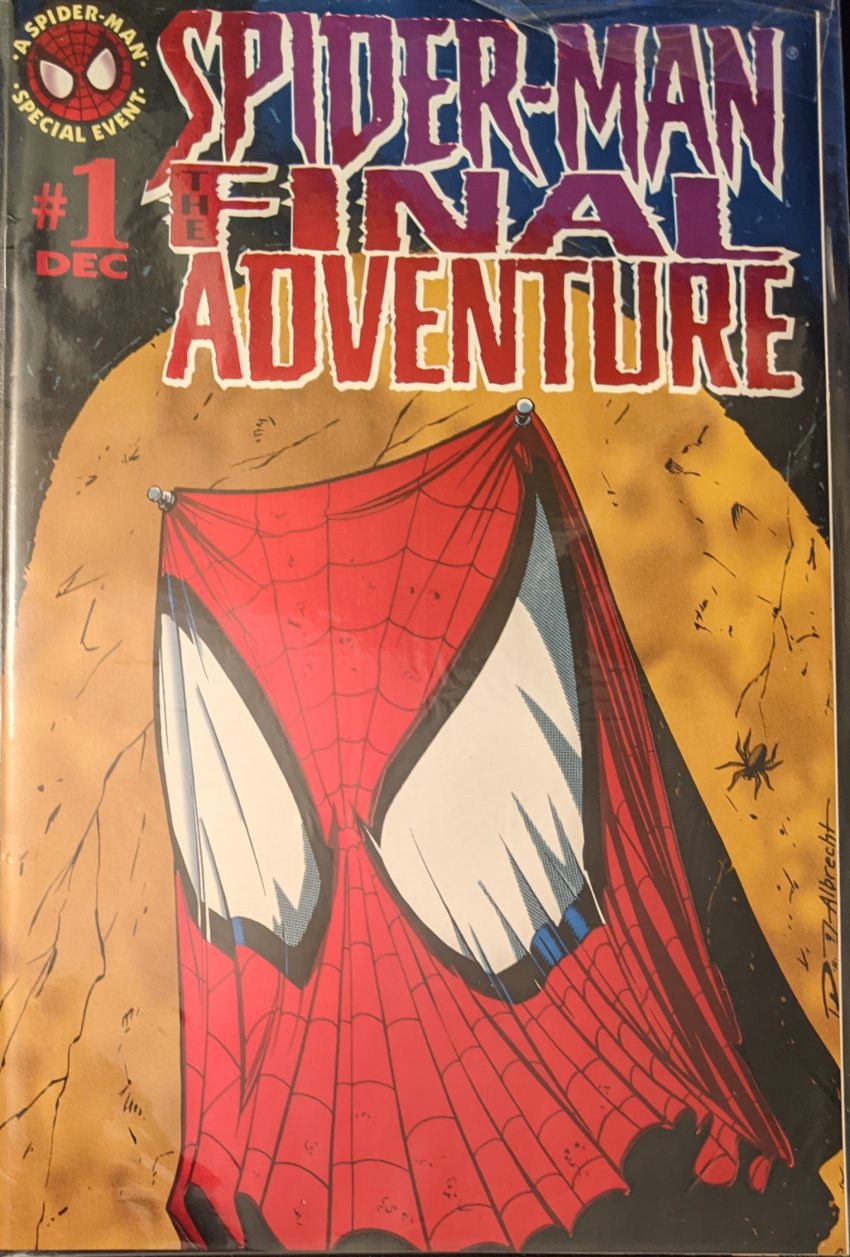 While the mainline creative teams were desperately trying to make something of the unwanted and unplanned for Scarlet Spider publishing stunt, the “Spider-Man Special Projects Office” also launched this, a potentially better but eventually doomed project. Couldn’t just let Pete & MJ vanish without a “final adventure.” But… didn’t turn out to be so final. Also, once again, didn’t turn out to be what anyone set out to do when it started. Kind of par for the course in the mid-90s. It must’ve been really hard to be a creative in the Spider-Office from 1994-1996. No idea what you’re doing from one month to the next, no matter what was planned. Anyway, time to follow Peter & MJ off into the sunset, and our guides on this journey are writer Fabian Nicieza, penciler Darick Robertson, inker Jeff Albrecht, and colorist Greg Wright. Fabian, you may recall, had a surprisingly enjoyable stint in the Spider-Office in the late 80s, but since then, he’s been catapulted to superstardom writing X-Force and X-Men, by far Marvel’s most profitable stuff at the time, but I guess he was up for something different. And this very special series wouldn’t be a very special series in 1995 without gimmick covers! This series comes equipped with cardstock covers and shiny foil to make sure they can add a dollar to the cover price. And like a dope, I bought every issue. We catch up with Peter Parker working in a lab, having lived in Portland, Oregon for 3 weeks now, and working for Galannan Alternative Research for Immunization Development, or GARID, finally working the science job he always wanted. But he has an ulterior motive: This company used to be the company the sponsored the experiment that made him Spider-Man. He hopes that working here will help him get ahead of any radioactive blood-related issues with his child. He notices a weird file on synthetic skin development in their database just as the bosses, Dr. Eric Schwinner and Dr. Monica Staphos, show up.

Fabian places Schwinner as one of the scientists who saw Peter run out of the experiment after being bitten in Amazing Fantasy 15, just to really sell the deal, and then recaps Spider-Man’s origin and how Peter’s a clone and blah blah blah. But all that’s in the past, and as he drives home from work (Peter Parker finally learned to drive), he thinks he’s ready for a fresh start.

That “die” joke feels wildly out of character.

Later that night, Peter can’t sleep. Hasn’t been able to for weeks, he thinks. He’s used to being out all night fightin’ people, this is new territory for him. He hops out of bed and onto the ceiling and looks at his Spider-suit in a box. He wonders why MJ insisted he keep it, and if she thought it would be a test of his resolve to quit. While he thinks this, she observes him looking at it in secret. Meanwhile, back east at The Daily Bugle, the insufferable Ken Ellis is being a jerk to Phil & Ben Urich as has become his custom.

Robbie going right to bat for Peter is no surprise, but Ben not trying to keep the vulture away from his old friend is odd. Anyway, back in Portland the next day, Dr. Staphos is still trying to figure out how to get her synthetic skin deal to work. They were testing it on a convict who was already dying, but with Schwinner trying to stop the project, she’s running out of time. She goes to see her test subject, and is told there’s a problem with him.

River Verys… some name. Staphos storms back into the office and is short with Peter, who thinks, “Rhymes with ‘witch,’” another extremely Nicieza but 100% off-base bit of “humor,” as his Spider Sense is triggered by her for a 2nd time. He decides to look into her work, finds her last 2 test subjects both had necrotizing fasciitis, and one died and the other was just released without help.

Peter has to print all this stuff out because in 1995, you couldn’t just email it to yourself, which already makes this comic far less obnoxious than the last several. Why does Peter carry around the results of the tests he ran to find out he’s a clone? You’re taking that to work? What if someone opens your briefcase?? Silly. Peter tries to go see Verys, but the owner of the company, Galannan, busts in, angry about the situation. His own security guard grabs him by the lapel and says all he’s worried about is bad publicity if Verys dies, which seems like a good way to get fired, but the guy just says he’s gonna go complain to Eric. The same guard is not happy to see Peter, who claims Staphos sent him to check on the patient.

Wow, some real science mixed with some reasonably believable pseudo-science. After all that cybercrap, this is pretty refreshing. Love to know how Peter would explain just happening to have some mystery ingredients that fixed Staphos’ research, tho. But, he decides to go home for the night and see how his “soup” is cooking in the morning. As he does so, Schwinner and Galannan are reading Staphos the riot act, but she isn’t budging on her work. And once they depart, she learns from the guard, Cal, that Peter Parker went to see her patient this morning, and gets a crafty look on her face. Meanwhile, Peter & MJ are on their greatest adventure yet: Lamaze class.

I so associate Darick Robertson with a more “adult” kind of comic book. Not that kind of adult, but like grown up, no superheroes things, which is mostly what he was known for shortly after this until The Boys. He’s great at facial expressions and regular people. He’s not what we’re used to in the 90s around here. But it’s still a superhero comic, albeit an odd one, so back at the lab, Staphos had discovered Peter’s modified version of her work, and she goes to immediately inject it into Verys. He says if it doesn’t work, he’ll kill them all before he dies, which is definitely a thing that makes you want to help the guy. But she jabs him with the goo, and…

Well. Expertly executed like a horror comic, those couple pages. Peter tries to explain that someone might be dead and it’s sort of his fault, but MJ says no, he lied to her.

Tendril, eh? Despite some off-the-mark jokes (A Niceiza tradition), this was the best comic in this whole block, no question. Best written, best looking aside from the JRJR issue. What a nice change of pace. Let’s see if it can hold this head of steam, because as usual, I don’t really remember.