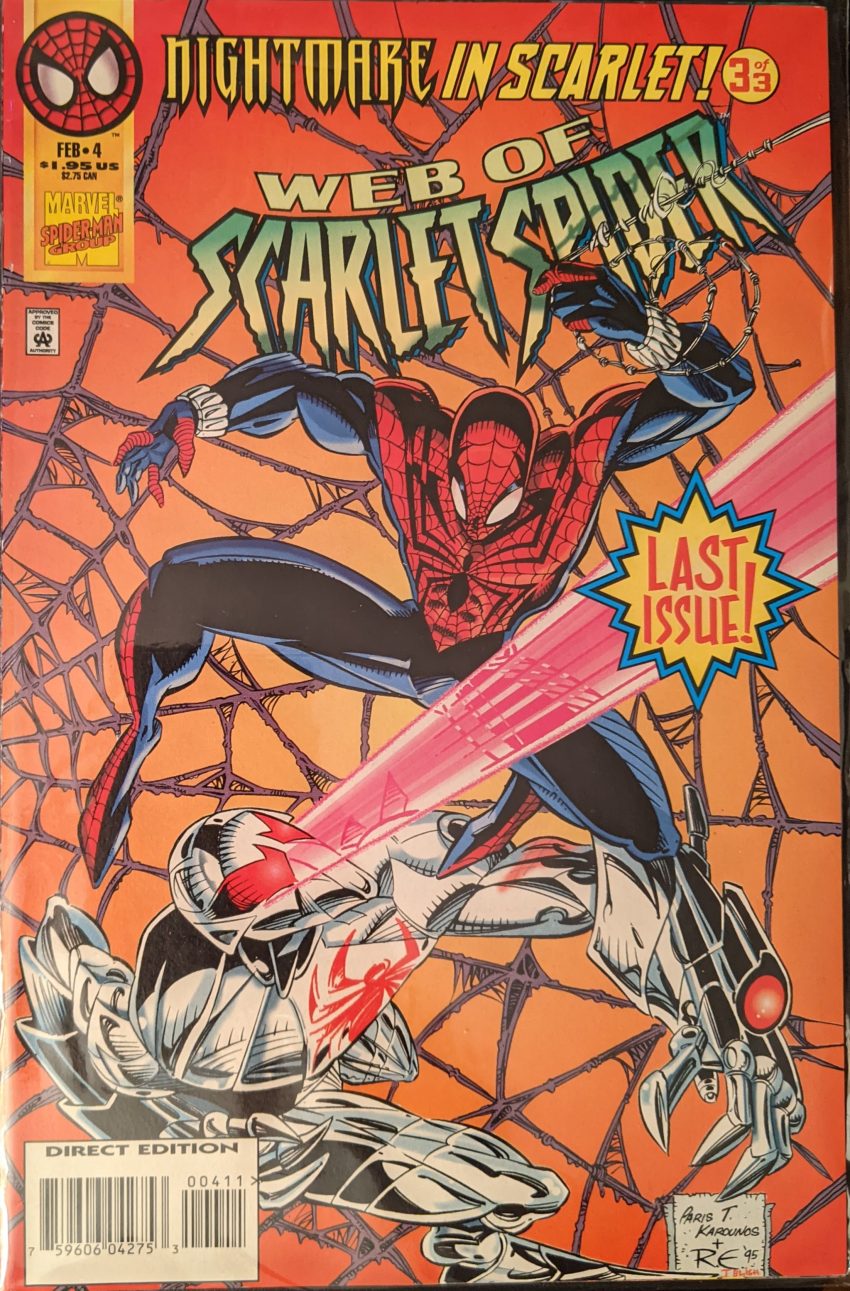 Love that “LAST ISSUE!” blurb. Truly something to be proud of, in this case. Look who it is. I had no intention of trying to talk my way through this nonsense during Block 10 years ago, so this goes here. So, I skipped the New Warriors issue, but this one is going to recap it, because of course it is, and for once, that’s good news. Well, relatively.

Paid $2 for this, too. What is the deal with the black-haired woman? Look at her on the next page:

Did she wander in from a Beetlejuice comic? Did Speedball just accidentally kill Lydia Deetz? Meanwhile, at FBI headquarters, Briggs’ boss, a Mr. Stone, from last issue, wants everyone to go fight Scarlet, and also don’t tell Briggs, because she’s too close to the situation. Fine, whatever, but too bad for him, she’s on her way already. She senses he’s gonna want to experiment on her partner, and she wants to try to help him first. Ah, yes, the FBI, known for doing science experiments on hologram cyborgs.

Firestar recognizing Ben asks more questions than it answers. She’s met Spider-Man several times, including relatively recently, at this time. So if she recognizes that voice, she should have also recognized Ben’s voice as Spider-Man’s, and once again, the fact that a random dude the with the exact same powers as Spider-Man has shown up should be weird. Ah, well. They didn’t care, why should I? Also, is Speedball off the team or not? Whichever it is, he comes flying out of the building just then, having been hit by the Spider, and the baddie comes after him, so the hostages are safe. Except maybe Lydia. The ever-growing Spider-Bot hits everyone with a sonic blast, which also endangers several nearby helicopters.

Spidey keeps talking as they chase continues, eventually saying the robot man’s gonna pay for copying his old costume and ruining his reputation, and now the Scarlet-Bot really wants to kill him. “I can’t believe the guy with the same powers as The Scarlet Spider is The Scarlet Spider!” SS hits our hero with a blinding light, uh, blinding him, and then socks him really hard, sending him falling to the ground below just as Briggs shows up. But don’t worry.

Not sure what’s meant to have happened there. Justice saves the good guys with his telekinesis as the bad guy crashes into the pavement. But that doesn’t stop him, and he’s back on his feet and ready to attack, until Briggs steps between him and the heroes.

Obviously, this works, because it’s that kind of story, and Wade turns back into Wade.

That web is not coming from his webshooter, period. And with that, Web of Spider-Man comes to its ignominious end. Woof. What a way to go. Marvel Team-Up went out with an X-Men guest spot. Web gets a pointless pile of junk forced to exist by greedy marketing people. Ah, well. Can’t win ‘em all. Glad to have this turkey over with. But there’s still more loose ends to wrap up.