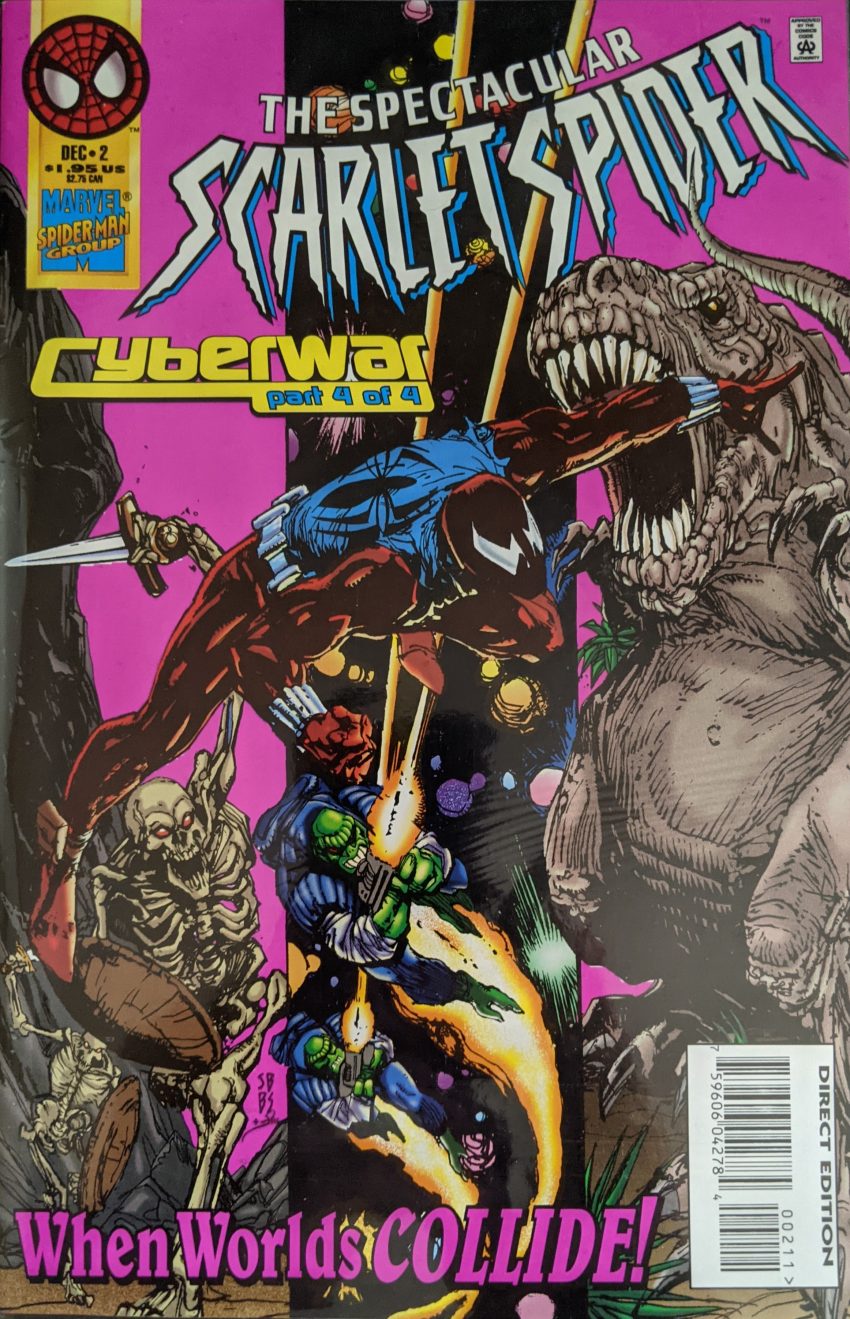 Looks like virtual reality is about to get even stupider. It’s the last ride of Sal and Bill, with Jimmy Palmiotti also doing some inking. Bill will go down as Sal’s last great inker. We’ve seen how bad it gets when he leaves, and then when Sal leaves, the rest of his career is almost entirely inking Ron Frenz’ pale copy of his own art style. Strange, strange career arc. Todd DeZago and John Kalisz still on board to round out the crew. Ben begins a 3-page recap of this storyline with an evergreen reference to the Friends theme song as he flees the assembling cops who’ve heard The Scarlet Spider is on a rampage.

Not a fun day for Ben Reilly. Elsewhere, Jason Tso tells Kannor to get back to the club for when Ben Reilly shows up late so he can be thrown out and fired, and Alistair Smythe announces the dumb computer components that fueled this storyline have made his dumb VR visor capable of controlling all his dumb Spider Slayers at the same time. Hooray. Also, The Pro is in Smythe’s lair to kill one or both of them, who knows, who cares. Else-elsewhere, Doc Ock recaps her part of the story to The Master Programmer, saying she’s going to go fight Tso personally, and also that once she gets the “chips” back, Master Programmer will be able to walk around in the real world due to that solid hologram nonsense from last issue. MP, for his part, says he’s gonna go digitally kill digital Seward.

Boy oh boy, this issue is almost half over and it’s all been recap. Some people don’t like the recap pages in contemporary comics, but I ask you, is buying a comic that’s half telling you stuff you already know really a better use of your money? Anyway, Ben Reilly arrives home, having taken the bus to avoid causing chaos as the now universally-hated Scarlet Spider (Word must travel fast!), only to find his building is under attack by… The Scarlet Spider. The other one. Carrie Bradley appears, now blonde for some reason, to tell him his place got trashed, and he notices Ken Ellis & Angela Yin on the scene. Ben slips into the building to find Seward’s lab totally trashed, and a message on the machine, which he rather hilariously stops to check.

“Disco!” What a completely awful plot twist! What a mindbogglingly stupid premise! What a waste of time this entire stunt was. Ock and her goons arrive at Smythe’s place and start fightin’ his Slayers, but then Tso steals control of said Slayers from Smythe, which seems bad for like 2 panels, and then….

So, what, is “virtual reality” just the sprites from various PC games now? Is she going to take over the world with the orcs from Warcraft II? That would actually be kind of amusing, can’t go that far. Just various generic monsters and things. I’m surprised this comic doesn’t literally smell bad, it stinks so much.

I’ve read a lot of stinkers for this blog, and even so, I don’t think I have ever been this mentally checked out. This is garbage. Anyone who bought this should’ve gotten a refund without even asking for it. Digital Seward, now also in the real world, has “made his own chip” with a virus on it that’ll fix all this or something, whatever. I am so tired of the word “chip” being a stand-in for any technology these doofuses don’t know about. Ben swings off, punches The Master Programmer, gets hit by Ock, puts his chip in the dumb visor she’s carrying, and…

And so, the transition that was quite literally supposed to happen 3 separate times already in the overdrawn, bloated nonsense that is the clone saga could finally happen. Ben goes off to be Spidey, and we’ve seen how that goes. It’s hard to understand the choices made in this mess. Why introduce and eject a new love interest in the space of 2 months? Why did Ben need a job he would immediately lose when he hasn’t had one this whole time so far? Why interrupt the flow of this dumb cyberjunk for a month to introduce The Great Game instead of saving it for the Spider-Man titles? I guess they were just desperate to fill pages. But wait, what about that rampaging, evil Scarlet Spider? Well, behind the scenes, not only had marketing forced them to do this 2 month stunt no one wanted to do, but they also decreed that one of the Scarlet Spider titles should last 4 months instead of 2. This was non-negotiable. So get ready for more with the evil hologram controlled by an insane kidnapped FBI agent next time. Yeah, really.