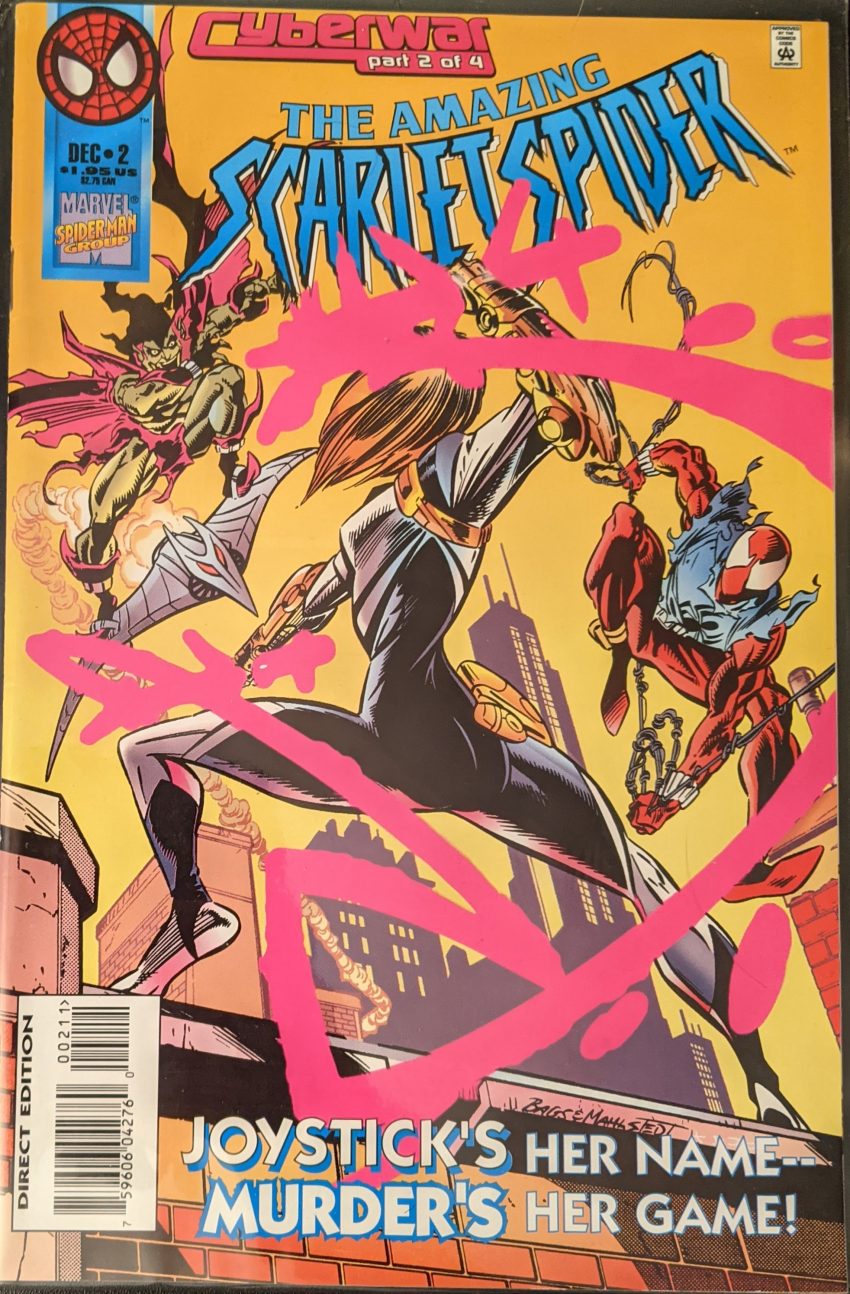 This mess might’ve forced some creative chaos on some of the titles, but if you think a little thing like two entire unscheduled issues of comics is gonna throw a Mark Bagley or a Sal Buscema, yer wrong. This month, the new ASM team gets started early, as Tom DeFalco takes over full writing duties alongside the existing art team. So, into the heart of this cyber-nonsense, they’ve decided it’s a good idea to introduce the concept of The Great Game.

Where to start on this. The dialogue is atrocious. “You have to go fight a spider-man.” “I was hoping for Spider-Man!” “It’s… look at the picture, it’s the same thing.” I still wish someone, somewhere, had devoted any time at all to anyone outside of the superhero world, or even in it, going, “Say, how come there’s 2 Spider-Mans now?” It’s not exactly a generic power set. A 2nd Captain America shows up, ok, someone made a guy a shield. 2 guys who swing around on identical webs and stick to walls and such? Is there a club to join? Of course, this is nothing compared to comics today, when there’s Spider-Man and Miles Morales Spider-Man and Scarlet Spider and Silk, who has all of Spider-Man’s powers, and Spider-Gwen and maybe another Scarlet Spider if Kaine’s still alive, I don’t actually know, and don’t forget The Superior Spider-Man and Spider-Girl and Spider-Woman and and and…. There really is a factory now. Anyway. Scarlet Spider is beating up some “gangbangers” who were allegedly fighting over who gets to eat in a pizza place, while recapping his deal. Then he thinks he’s late for work and recaps more of his deal as he goes to the club.

I forgot Rachel’s name and I was far too lazy to look it up, but I swear she was an undercover cop last issue. Aw, who cares, Seward Trainer is still in cyberspace, making my teeth grind, doing the usual and recapping his deal, then Doc Ock recaps her deal, a lot of recapping, but then she asks if the new subject is ready, and her still mysterious digital partner materializes Stunner into cyberspace. Not the fake one from last time, but the real one, who is very confused. Me, too!

The mystery person is becoming less mysterious with each appearance, but I still don’t remember who it is. Whatever. Jason Tso is furious Ken Ellis has tied him to organized crime and wants Ben to go beat him up. Ben somehow still hasn’t decided if Tso is a gangster or not. What a dope. He also doesn’t know what to do about his new orders. Later, Joystick arrives at The Bugle in a van driven by a “monitor” of The Great Game looking for Ken Ellis, since he’s written so much about her quarry. Instead, she runs into Phil Urich, Ben’s nephew who has recently become a heroic Green Goblin. She asks him to give Ken her number, then Ken comes around being a jerk as usual, saying he’d do a better job covering this new Green Goblin than Ben Urich would.

Almost got ‘im, JJJ. Very quickly, Phil Urich goes home to get his Goblin suit and Ben switches to Scarlet Spider to follow Ellis, who is already being followed by Joystick. Scarlet isn’t sure what to do about Ken when he’s almost zapped.

So, there’s The Great Game explained to our hero. We already saw how all this places out with Jimmy Johnsmore and whatnot. No need to revisit those dreadful stories. I still think this could’ve been an interesting concept, but all the participants were horribly lame and it didn’t really click. Anyway, that zap makes debris almost fall on Ken Ellis, but he’s saved by The Green Goblin, thinking pure 90s DeFalco nonsense: “What’s WITH this scene!? I only wanted to drum Ellis for trying to DOG my uncle, but this is, like, WACKED OUT!” A totally real way a young person speaks! Joystick spots GG and wants to add him to her scorecard. Phil dumps Ellis on a rooftop, and even though his previous meeting with Scarlet in WEB 125 went bad, he sticks around because he’s ID’d Joystick as “That MAJOR BABE who played me at The Bugle!” She continues to fight Scarlet.

Alright. GG tries to make friends with Scarlet, and it sort of goes ok, but then Scarlet realizes he’s late for his date. While he rushes off, we see Joystick getting the news that the committee behind The Game has decided Scarlet Spider is worth 1500-2000 points. But then we check in with Ben Reilly, late to meet a very upset Carrie Bradley.

Well, that’d be why I don’t remember her, I guess. The issue ends with El Toro Negro threatening the dude from the beginning to tell him where Joystick is so he can have revenge, blah blah blah. Apparently the Great Game part of this story continues in Green Goblin #3, but I’ll never know for sure. This issue largely just curbed the whole “Cyberwar” thing to shoehorn in The Great Game. How strange.