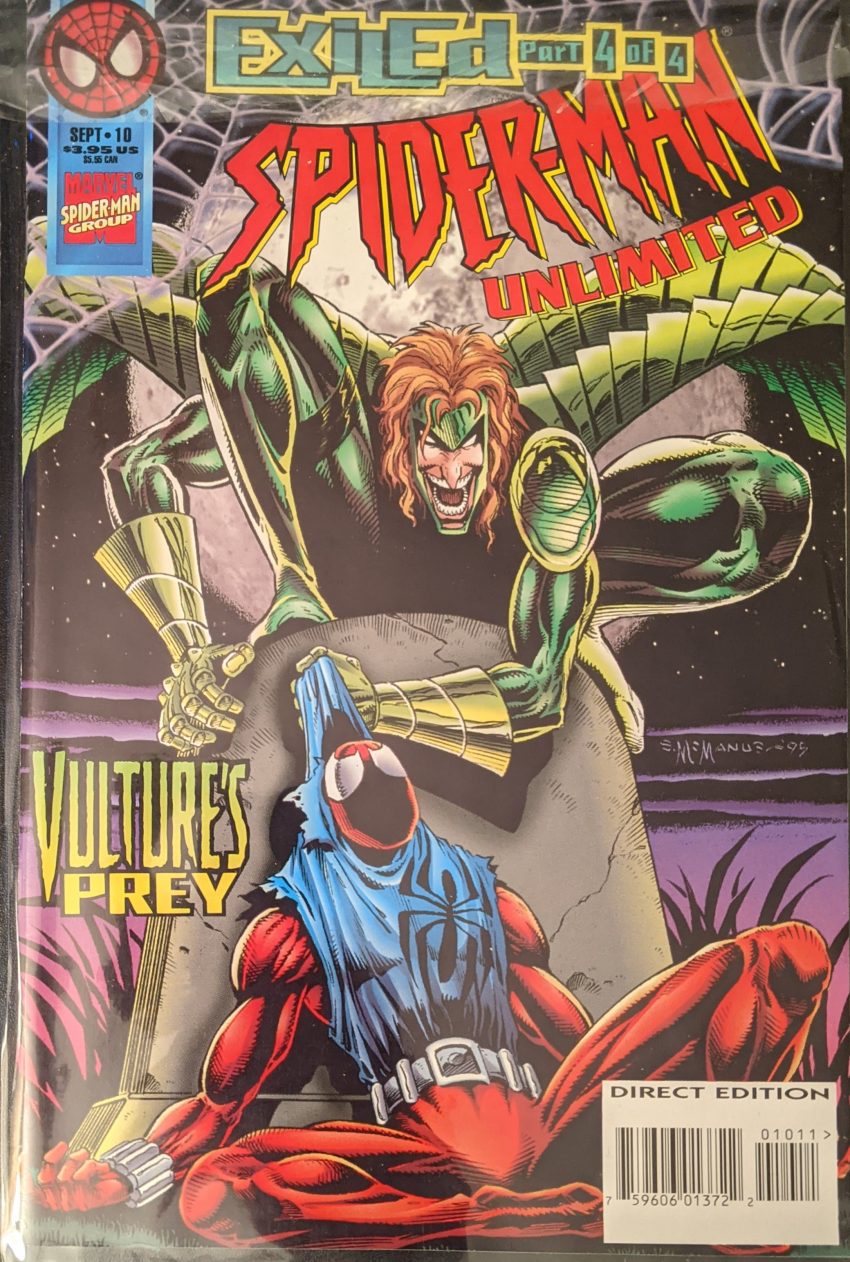 Those are some mighty long limbs on The Vulture, there, Shawn McManus. Did I buy this back then? I might have.The bag sure looks it. I guess because it was part of a crossover. As usual, seemingly, I don’t remember it at all. Mike Lackey writes, Shawn McManus draws, John Nyberg inks (With flashback line art by Roy Burdine), and John Kalisz colors.  The Scarlet Spider swings through New York, furiously recapping the previous 3 parts of this storyline and his whole deal over 3 pages. Then The Vulture gets a page to recap HIS deal. Gotta make sure everyone buying “Part 4 of 4” is up to speed, I guess. Vulture’s deterioration is getting worse.

Everybody needs a bio-armature. Vulture finds that he’s old again, and is furious, saying he can’t die like this. Then a newspaper vendor asks if he’s ok, so that guy’s cooked for sure. Then there’s some random family?

Those kids must live for the drama, look at that weirdness. The Scarlet Spider happens on the news vendor, who is shockingly not dead, or even hurt. He tells SS that Vulture said he had a “polluted life force” and left (Because the guy is drunk). Ben is about to investigate when he notices the date on a newspaper. It’s the anniversary of Uncle Ben’s murder! He swings off in a rush beating himself up for being insensitive for forgetting. Uh… where ya goin, buddy? Elsewhere, a guy gets mugged in the subway, but before he can hand over his money, the guy has vanished. Unfortunately for the victim, he continues on his way, and…

Bad times. Meanwhile, Ben’s made it to, uh, Ben’s grave, and is doing the usual “I’m sorry” routine when his danger sense warns him someone else is coming. At this time of night, that seems odd, but he hops up into a tree to avoid being seen.

Mulligan flashes back to him and Ben Parker working in a textile factory, when a friend of their got his arm stuck in the machinery, and they lept into action to save him.

Why is Ben already old???

Hold the phone, are we establishing that Ben Parker was still working when he died?? He looked like 400 years old at the time! Is this a massive retcon? I assumed they were gonna be in their 20s working in that flashback. Wow, man, what? And who are those people at the funeral? This issue is asking way too many questions it won’t answer.

I mean, that’s a sweet moment for Ben Reilly, really, but the idea that Ben Parker wasn’t retired is just bananas to me. I wonder how many things writers have had Ben doing the night he died by now. I bet it’s a ton and none of them line up. We check in with Jimmy, who’s working for a small time hood planning a robbery, and encourages Jimmy and the others to kill anyone who gets in their way. Jimmy suddenly has second thoughts, but it’s too late now. Elsewhere, The Vulture is breaking into Metro Electronics, hoping to score some components to increase the efficiency of his “life force syphoning” device. That’s a thing, for sure. He laments that he’s become some kind of energy vampire, but says if that’s what it takes to survive, he’ll do it. Then he flashes back to how he learned he was turning old again and it frankly doesn’t seem necessary, especially since it’s recapping the filler “Funeral For An Octopus” miniseries I did not buy and Spider-Man Unlimited 9, which I have already forgotten. Oh yeah, he was in the new Sinister… Seven or so, I think. Whatever, he breaks into the place and guess what, it happens to be the place Jimmy’s gang has come to rob. Whoops!

For not wanting to be an energy vampire, he sure is cavalier about it.

Then Vulture swoops in, scattering the goons, sucking the life out of one of them, and leaving the guard and Jimmy cowering in a corner. Seems like about time for The Scarlet Spider to arrive on the next page. But he doesn’t. He does see 2 of the gang running away, web them up, and ask them what’s going on, tho, so on the NEXT page…

Scarlet gets into it with Vulture hoping to buy Jimmy time to escape (No love for the guard?), but Jimmy is trying to think of a way to help. Vulture’s absorbed so much life force that he’s way stronger than usual, and a kick in the face takes Ben down for a sec. Long enough for Vutch to scoop up the guard and the parts he wanted and fly away. But Scarlet Spider’s not letting him off that easy, and swings off after them. Vulture does 101 in the villain playbook and drops the old guy to distract the hero while he escapes.

Man, this guard is more convenient than the butler in Spider-Man 3.

Meanwhile, Scarlet Spider is… calling The Mulligan residence and talking to the daughter, who tells him everything that happened on the previous 2 pages. Uh, ok. How does she know already if she’s at home? Ben vows to himself to get this Whitten and The Vulture. Elsewhere, Colm Mulligan rolls up to Whitten’s place, but it’s been ransacked. The Vulture was there and killed most of them. Uh, why? That makes no sense. How would he even know about them? Colm means to kill Whitten, who was left alive, of course, but he can’t do it. Whitten has no such qualms, but he’s stopped by a web.

Somewhere, somehow, some Peter Parker is always going to be having visions of MJ dying in this time period. For some reason. Good of them to get in their 1 page of Spider-Man, I guess. Meanwhile, Scarlet Spider catches up with The Vulture. Who is just flying around. He apparently already beefed up his energy syphon machine and used it on Whitten’s guys, so he’s really amped up right now. As for how Scarlet found him so easily, Ben says it wasn’t hard to find a green guy flying around, even in New York. Ya know, I don’t think I agree. Anyway, it’s fightin’ time.

Vulture grabs Scarlet by the neck and begins zapping the life out of him. I guess. No Spider Sense? But as Ben crumples to the ground, Vulture feels no more vital. And then Ben kicks him in the face and right into a fuse box, zapping him pretty good. Vulture’s still not down after that, but Ben webs him to a wall before he can do anything.

Alright. As he watches cops come for The Vulture, Ben thinks he beat him by putting on a “rubber skin diving shirt” so he couldn’t absorb Ben’s electrical energy. The pseudo-science of all this is so insane that I don’t even care. Now he thinks there’s only one loose end left.

All’s well that ends well, I guess. This was yet another crossover story where the part in SMU didn’t really have anything to do with the rest. Why do they keep doing that? Was readership so low on this title compared to the others that they didn’t want anyone to feel like they missed something? Very weird. Makes an already inessential title seem even less important.