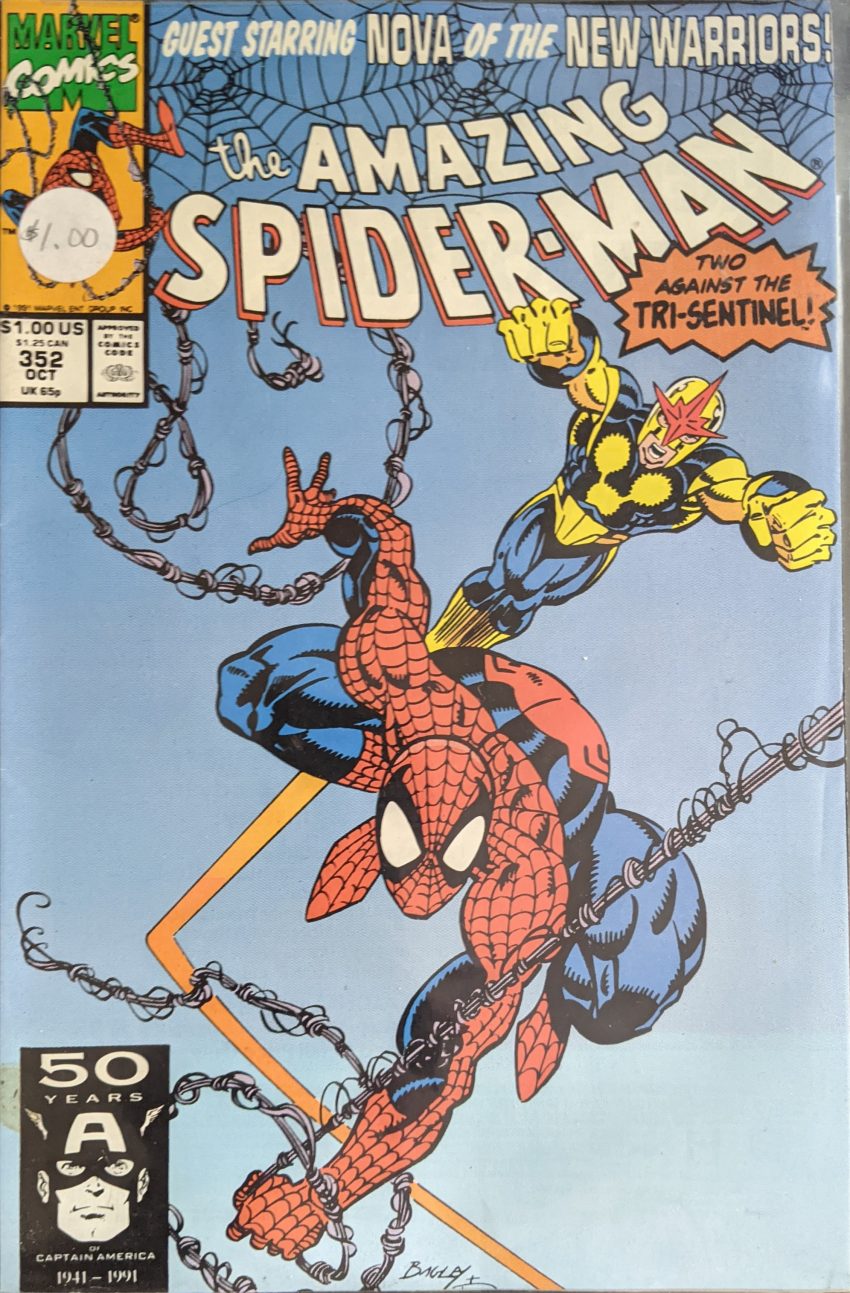 Bags’ first 2 covers for ASM are strangely empty, this one in particular. Maybe they were done in a hurry. This one is in a completely incomprehensible bag so covered in (now very old) tape I kinda destroyed it trying to get the comic out. I like leaving them as they were when I was a kid as much as possible, but it shall go in a normal bag from now on. Sam De La rosa tags in on inks this month. So, our heroes are still in their predicaments. Spidey recaps last issue and then notices the Antarctic Vibranium box nearby, thinking if he can get that open, it’ll melt the Tri-Sentinel. But first he has to get out of that force bubble, which he does by smashing the floor beneath him. But his safety is short-lived.

It is perhaps worth mentioning that Carlton Drake is still out there as a literal spider-man since the end of that Arachnis Project miniseries and no one’s done anything with him. As nova takes off to try to help Spider-Man, Spidey himself is still rooting around inside the robot, saying he has since used his Reserve Avenger status to read all their files on sentinels. How convenient! He assumes it’s headed for the nearest nuclear plant to fulfill its original mission, and has traveled to what he hopes is the CPU to try to slow it down. Some rather unconvincing computer jargon indicates he’s trying to make it stop flying, and as he’s grabbed by a bunch of cables, he succeeds. As it comes in for a landing, Nova tries to attack, but gets zapped.

“Let me explain in detail who I’m talking about and how they’re armed to you, a person who probably knows and also doesn’t need to!” As the Tri-Sentinel walks on to its destination, Nova saves a picnicking couple from being stepped on, wondering how Spidey’s doing inside. He’s fine. He manages to twist so the firing rivets hit the cables holding him, allowing him to break free, hoping to find another angle. Outside, Nova is flying around trying to figure out what to do when he finally realizes, to his horror, where this thing is headed, which is the same nuclear facility from ASM 329. Inside, Spider-Man once again has to avoid increasingly dangerous defenses, and decides to head back down to the CPU, figuring the robot won’t deploy such destructive tactics near its brain. Outside:

–further into the city!” Nova dodges the goon squad outside, forcing them to accidentally shoot the Tri-Sentinel.

Well, that’s sure convenient! Inside, Spider-Man figures he only has minutes to figure something out before the Tri-Sentinel adapts to whatever’s slowed it down (He doesn’t know), and heads back to the Vibranium. He manages to open the box, and the Antarctic Vibranium begins to melt the stuff around it, but the robot just begins reforming, putting it in a stalemate. I don’t know much about sentinels, but this seems too advanced. The Tri-Sentinel starts freaking out, and Nova isn’t sure what might be the cause. He forces the Life Foundation goons to land and wait for the cops, while inside…

That explosion panel is really effective despite not really having anything in it. Sometimes less is more. The Tri-Sentinel is left a huge cloud of dust, the Antarctic Vibranium having fallen to the ground below. Later, Spidey and Nova watch the authorities clean up, Spider-Man saying no one was hurt and injuries were “miraculously low.” That’s nice. Nova says there’s one bit of unfinished business.

This whole lil story was written like they’d never met, despite our previously-seen 2-parter from the 70s, and that last page really confirms it. Whoops. I guess David wasn’t counting on anyone being crazy enough to read the entire history of Spider-Man…

And that’s that for this block. Next up, we tackle the final section of the clone mess. True to this blog’s poorly thought out history, we’ve already seen the clone era begin and end, and now we’re going to end in the middle. I coulda planned things better, but it’s too late now!