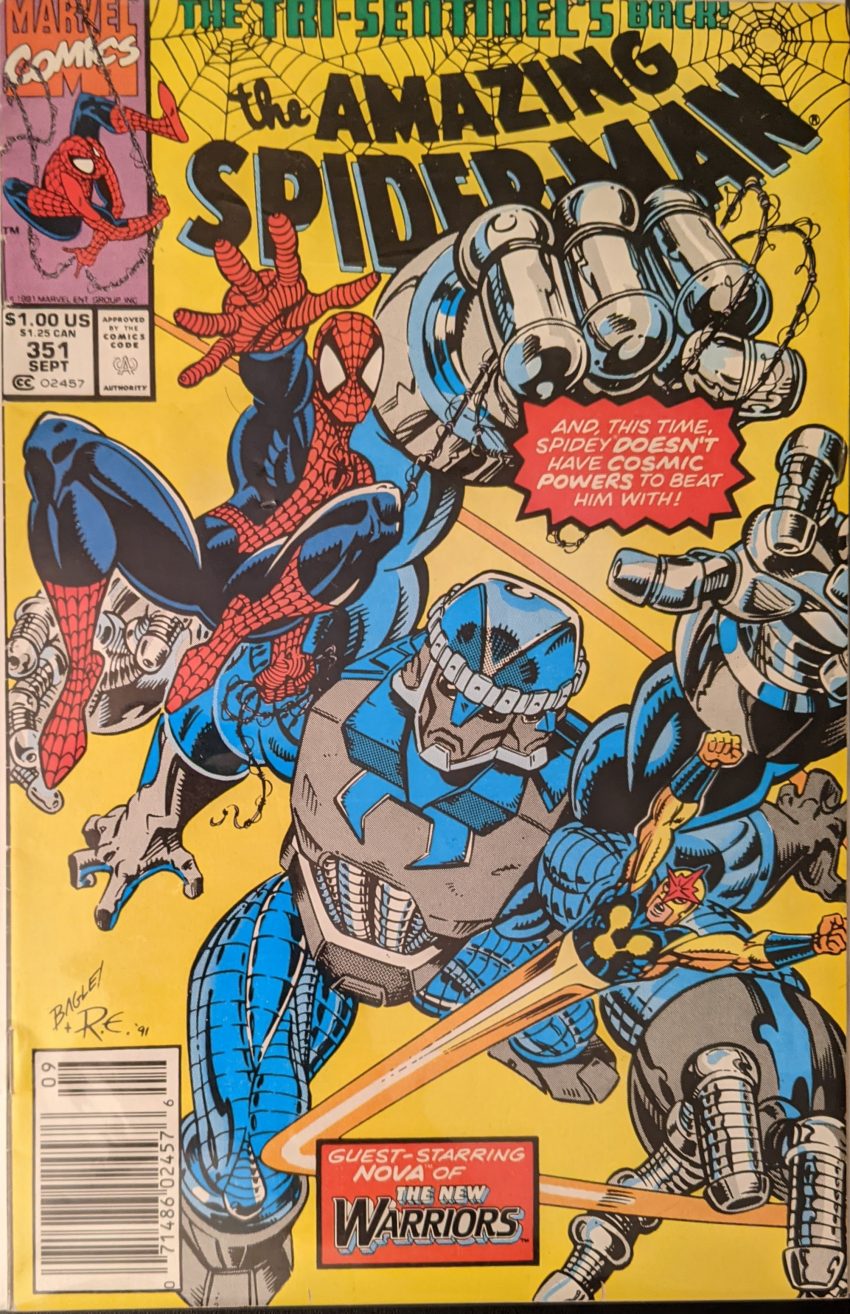 A wild Mark Bagley appears! After his fill-in on ASM 344, he’s back to stay. For 65 issues, in fact. We’ve seen the end of that streak, but here’s the start. And he’s brought Nova from his other gig, The New Warriors. New Warriors was a hot new launch at this time, combining some existing young hero characters like Nova and Firestar with some new ones to create a superteam for the 90s. And Bags is fast enough to keep doing both for awhile (Almost another year, even). Me, personally, with the wisdom of my 13 years, I felt like Bags’ style combined aspects of McFarlane’s and Larsen’s, and so was a pretty good fit to take over the book. Not a bad take, young me. I think Bags’ art has a more “liquid” feel, like McFarlane’s, when compared to the more angular Larsen, and yet the similarities between him and Larsen have always been rather striking to me. I always assumed they must know each other as a kid, given the ample similarities, but I guess they didn’t. But I mean look at this:

It almost reads like Larsen inked by McFarlane. Bagley will evolve over time like any artist, but right now, he really does seem the perfect guy to pass the baton to. Anyway, Nova rolls up on those dudes, and they have a solution prepared for super-interference in the form of what looks like a crazy Nerf gun. It shoots big rubber batons, instead of bullets, and they say “they hurt like blazes” as they catch Nova with 3 of them. One goon says he’s glad they didn’t have to do any damage because their boss doesn’t want the bad PR, and then he gerd webbed to the wall. Nova’s mad at Spidey for getting involved, but he doesn’t have long to think about that, because a goon produces a sonic grenade that puts both our heroes on the ground. Through the pain, Spidey tries to tag the fleeing van with a tracer, but Nova rolls into the way, so he has to fire his spare.

I wonder if this is their first meeting since ASM 171. Seems almost impossible, but I don’t know.  Soon, we find Spider-Man stuck. The goons escaped and he doesn’t know what to do about it. But, since they were backed up to the same lab that caused all the trouble in The Vibranium Vendetta in the most recent annuals, he drops in on one of the students who caused that mess. He reveals he managed to get his hands on some real Antarctic Vibranium to try to figure out why his experiment failed, but then someone offered him a ton of money for it. That’s what the goons hauled off with. So that’s that, but as he swings off, Spidey again wonders what they would care about public relations.

As Peter & MJ leave, she wants to know what’s on his mind, but when she finds out it’s Vibranium, she rightly begins to tell him that being Spider-Man 24 hours a day isn’t fair to her. Buuuuut, right then, Nova flies overhead, and Peter is already half gone. An angry MJ continues to their appointed party without him. He realizes the damage has already been done, so he might as well take off, but he wonders what’s been bugging her lately. What indeed.

But as the sun rises the next day, Spider-Man and the hero people foolishly thought would be the new Spider-Man 20 years prior haven’t come up with anything. Until Spidey finally gets a buzz from his tracer, and sends them to a heavily guarded facility inside a mountain with the van parked outside. The find a big air vent and Spidey rips it open. Still keeping his danger sense to himself, Spidey stops Nova from walking over an invisible tripwire, causing Nova to think Spider-Man is actually kinda spooky. Then they hit a fork in the road and have to split up.

How does he know Loki created The Tri-Sentinel? It’s pretty obvious who’s behind this to anyone who’s seen previous appearances of The Life Foundation. Tho, I confess, I don’t remember if I caught out quickly or not as a youth.

Not enough people use the word “tunic” anymore. Spidey tried to warn you about the tripwires, buddy. Nova just crashes up through the roof, escaping the guards, but getting an alarm sounded, and that brings some unwanted attention to Spider-Man. The two heroes separately being to lay into the army of goons facing them, but Nova gets caught in an electrified net and taken down.

Dumb as ever, Drake thinks the giant, rampaging robot is the perfect security for his latest ridiculous doomsday club for the rich. He details how they scooped up the remains, knowing sentinels eventually regenerate, and encase it in an electromagnetic field keeping it in check. They also put the Antarctic Vibranium in its head as failsafe. Exposition delivered, Drake turns it on to kill Spider-Man. In 2 panels, it rejects The Life Foundation’s attempts at reprogramming and returns to the mission Loki gave it. Bravo, dumb dumbs. As it begins to trash his rich people retreat on its way out, Drake decides to activate his failsafe, only to quickly learn it doesn’t work. Magic beats technology every time. Spidey dodges an attack, but not a blast of tear gas, and you know how it is with him and gas. But right about then, Nova finally wakes up and easily snaps his restraints (The Life foundation really sucks), entering the fray. As Nova attacks, Spider-Man finds a access panel in the robot’s head and tries to break it from the inside this time, but he’s detected and trapped in a force field before he gets too far.

Boy it’s nice to read an actual superhero adventure after all that DeMatteis. We’ll see how the boys defeat this big robot next time.