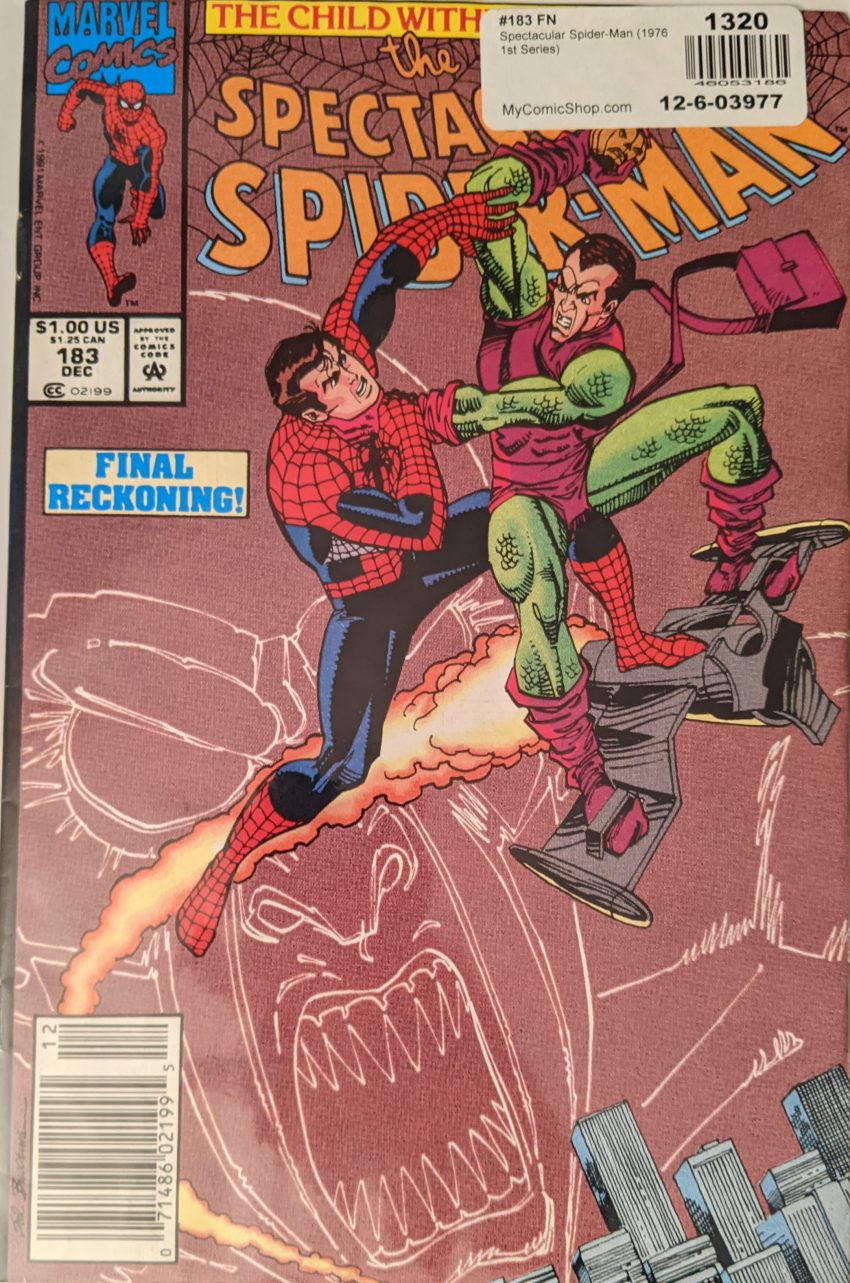 The being the last part of the story and having the cover blurb “Final Reckoning” is extremely funny if you can see the cover of next issue in advance. Spidey did the “confront your fears and emerge from the subconscious” part of a JM DeMatteis psychological story an issue early, so I guess all that’s left is fightin’. This issue’s video footage first page is Edward and his family posing on their front lawn together looking happy. Then we cut back to the present, a dark and stormy night, as everyone looks up at the newly arrived Green Goblin, who doesn’t seem to mind that they have an audience and whatnot, but at least calls him Spider-Man and not Peter and he begins his attack.

That was easy, too! Page 8 and I guess we can call this one a wrap! Oh, wait, as Vermin is being loaded into a police van to get back to the hospital (And we learn his last name is Whelan), Harry comes back for more. As The Goblin dives in, Spider-Man grabs onto the bottom of his glider and is whisked away, quipping “Don’t worry about me, doc — I’m getting time-and-a-half for this!” As usual, just right back to your regularly scheduled Spider-Man programming now that the depressing psychological stuff is over. Harry spouts some typical Goblin banter, but Spider-Man swings onto his back, saying this is about Harry Osborn and Peter Parker, ripping their masks off. But Harry says it hurts too much to be Harry (Not sure why) and that he’s The Goblin, all while zapping Peter in the face at point blank range. Our man goes falling to the ground, obviously. As he runs and dodges every larger explosions, Peter says Harry tortured him and asks what more he could want. As he’s almost caught in a huge explosion that sends him flying, Harry tells him he wants his life.

Kinda feels like Sal’s been forced to rush this big finish, and that’s a shame.

Peter says he knew Harry couldn’t do it, thinking they’ve turned a corner, but Harry rejects his friendship again, saying just looking at him reminds him of all the pain and death.

A prime example of why stories like this are generally not a great idea. You don’t want to give up Harry as a character, but you can’t reasonably reset to normal when a villain knows your hero’s secret, either. So you have to resort to amnesia or some weird and unsatisfying stalemate like this. Same with Norman, same with Venom. But the drama of the relationship is too tempting, and people keep doing it. Peter thinks, now in past tense all of a sudden, that he let Harry go because if he proved anything tonight, it’s that he’s not a killer. Our man hopes with time away, Harry might even come back to his life.Over footage of young Edward playing with his dad in a pool he wonders if he’s a fool to believe in hope. We see that this happier footage is being watched by Edward’s dad, who despairs.

One might think that these random new feelings about his parents might’ve surfaced, I dunno, say, when he went on a globe-trotting adventure that wound up clearing their names of treason? Maybe? Just a thought. Whatever. Well, this is over, right? Pretty definitively done. Well…wait’ll you see next issue’s cover.