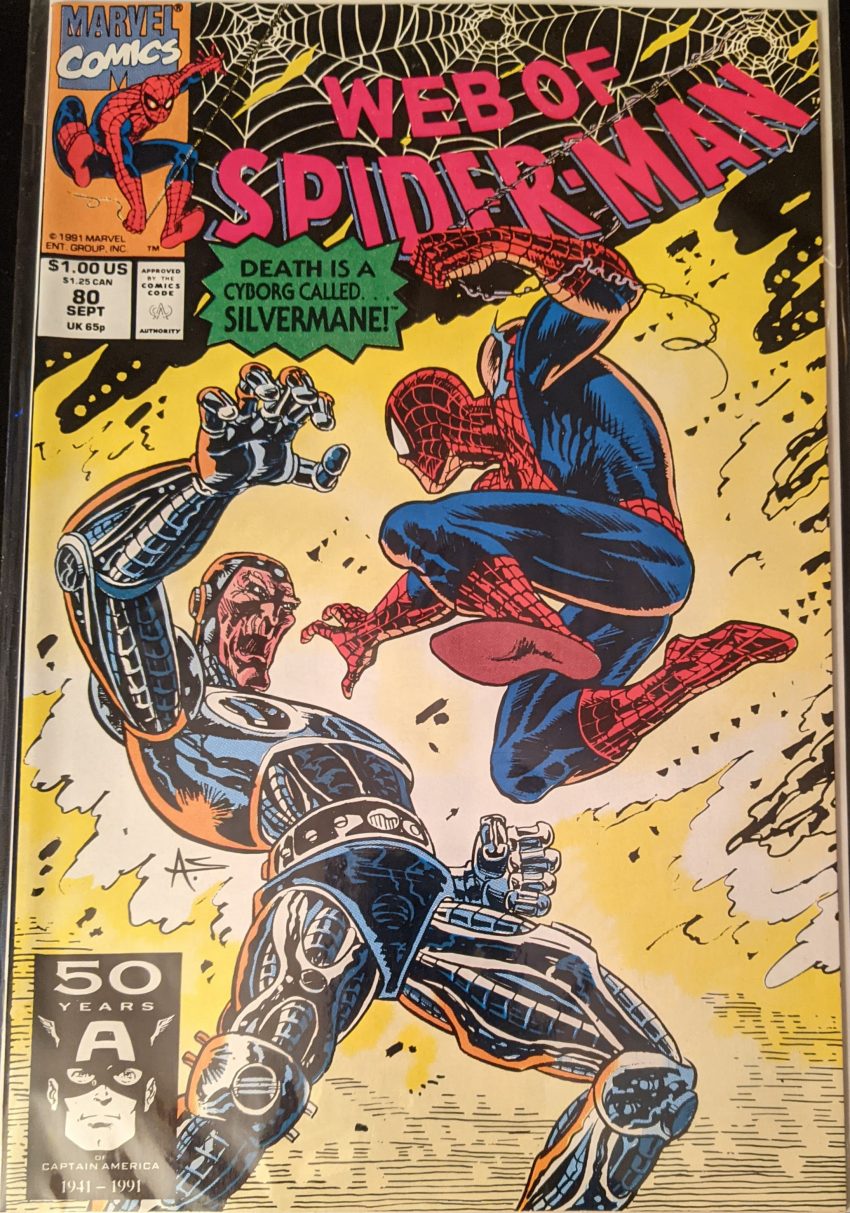 Ya heard it here first. That’s who death is.It’s funny to me how out of place Silvermane feels in the 90s. Because, like, look at him, 98% of him fits right in. Killer robot with a ton of detail. But the old man face is so the opposite of the “totally awesome!” 90s. No Todd McFarlane or Rob Liefeld comic would’ve had Grampa Robot in it. Anyways, Bob Sharen is joined by Renae Witterstaeter on colors this month, and we find Spider-Man waking up bound by a big contraption as Silverman looms over him. Silvio explains how he isn’t dead, but we didn’t see him die in the first place yet, so doesn’t matter, and then explains that Spider-Man is feeling weaker because the machine he’s hooked up to is draining his blood.

You’d think a blood stealin’ machine wouldn’t just be hooked to the forearms. Hey, what’s MJ up to?

Feel like the tracer tracker looks really different every time it comes back. But it’s nice to see these 2 not doing stereotypical catty stuff. Felicia sets out on her mission, returning to where Spidey was last seen and heading out from there, hoping to get a ping from the tracker. This is the opposite of the mega tracer gag from Spider-Man #58 Meanwhile, in Silvermane’s lair, the webbing Spider-Man is shooting into his restraints somehow makes them overload and explode. I don’t get it, but I’m not a pseudo-scientist. It’s not just the blood machine that goes out, either.

Boy, that was not a convincing ebay to get Spidey’s mask off. That’s weird. As our hero webs up the hole in the roof (For some reason?), he runs out of webfluid. And then the power comes back on, including Silvermane’s cameras, so now our man’s identity is at stake alongside his life. He does his best to cover his face and dodge Silvermane’s attacks, but his significant blood loss is not helping him out.

So, with Felicia having lost her powers (One might say “again,” even) in ASM 343, is it really all that wise for her to be doing this? She’s not being written as a clueless thrill junkie in this period, she should understand this is crazy. I guess she’s just super nice. Peter kicks Silverman to try to stop him from activating his lasers, but it’s too late. Felicia doesn’t seem too bothered by them, tho, and Peter uses the brief pause to grab his mask back off the floor.

Not much is making sense to me this issue. Not least Black Cat just getting up on the next page, no worse for wear. What? She comes at Silvermane with various kicks and things, and he mysteriously doesn’t electrocute her. Spidey realizes he might be able to do more at Silvermane’s computers, tho I fail to see how. As the robo-mob boss almost breaks Felicia, Spidey dives back in, and then all the computers start to blow up. But most of it seemed to blow up already, and Silvermane was no longer connected to any of it, so… what was that for? Silvermane rushes to a console.

Weird thing to say to your ex-boyfriend whose face you were literally horrified by on a couple levels, but ok.

Pretty weak explanation for Silvermane knowing Peter’s face was exposed, but it lines up with the haphazard nature of the rest of this issue. Speaking of, Peter returns home to his worried wife right as Dave Letterman is finishing up his Top Ten List (I miss those), and all is well. But watching from the skylight (Which is in the bathroom, which I assume probably shouldn’t provide such a great view of the living room), Cat thinks to herself the tracer tracker didn’t even help her. She just tracked Ripster’s trail through the tunnels. Great!

Why would Silvermane put a fake old man face on his new body? Or I guess on the fake body? This is confusing. Well, whatever his plans were, Silvermane wanders off into other characters’ books from here. Deathlok, Daredevil, Nomad, even Hulk. He doesn’t tangle with Spidey again until a miniseries called Power of Terror in 1995, which I skipped, and the next time he sees Spider-Man, it’s Ben Reilly in the already covered Spider-Man #73. Not the rivalry this ending predicts.