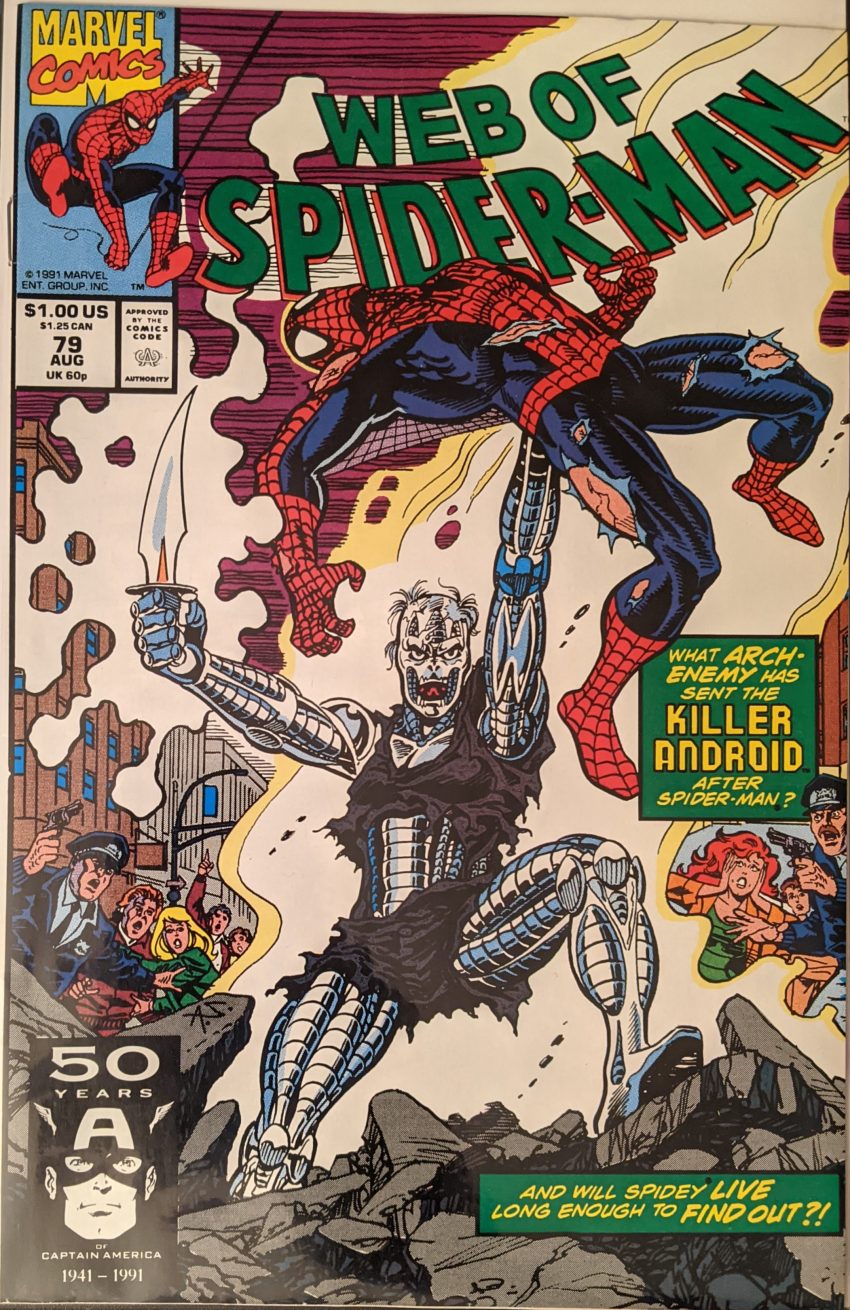 Not the most visually exciting villain. Bob Sharen on colors this month. Oh, this isn’t looking good. Peter & MJ are on a romantic carriage ride when it is attacked?

90s comics sure are full of… these guys. They all look like knock off GI Joes. Good guys, bad guys, they’re everywhere, and all utterly forgettable.

Anytime a comic book writer has a Southerner refer to a single person as “y’all,” I cringe. And what are these names? Purty Larry? SLAMBEAUX? Ugh. I get it, but getting it makes it even worse. Spider-Man shoots a web up into the trees to distract everyone, allowing MJ to hit… I guess Slambeaux with a big rock, but then she winds up with a gun to her temple. And called “y’all” again. A well-placed web ball ends that threat, tho, and then Spidey makes himself seen so they all focus on him, allowing MJ to run. They announce they’re called “Silver-Squad.”

I was wondering what the woman’s name could be, and I could only assume some kind of play on Ripley from Alien, and… I guess that’s that. Sort of. As the assembled doofuses close in on our hero, he leaps straight up, making them shoot at each other. “Purty Larry” gets cut in half by gunfire, but before Spidey can feel too guilty about that, he sees the guy is actually a robot. “Ripster” helpfully lets him know they all are, so now they can really amp up the violence as Spidey takes them apart. Rather literally.

Now gee whiz, who could that be? Been awhile since we saw Silvermane. He has one brief appearance between TAC 96 and this, which we’ll see eventually. Back in the park, Spidey’s more or less mopped up when Kavanaugh has MJ make the dumb decision to run back into the war zone just in time for “Ripster” to find her/its second wind and come at them swinging her ridiculous bazooka like a mace. Spidey pushes MJ away, but for no obvious reason she won’t leave…

Furthering the absurdity of this issue, Spidey is somehow on the ropes with Bazooka Jill chasing him. He scales an abandoned building and keeps almost getting blown up, while she scales the wall after him. How fast could she possibly be reloading? Where does she keep the ammo? Why can’t he just web it out of her hand? Oh, look, after 3 whole pages of running away for no reason…

It appears Spider-Man hit her so hard she blew up, but then she’s up again, skin coming off to reveal the robot below, typical Terminator stuff, only with the knife in her teeth for some reason. Spidey asks who sent her, and she says “Silver krrsk.” Maybe take the knife out of your mouth. Then Spider-Man just… tries to leave. Just swings away? What? But of course the robot is able to jump really far and catches up, cutting his web and sending them plummeting.

When the smoke clears, Spidey is on top of Rippy in a little crater, unconscious, but she pops up like all good evil robots do, now mostly without skin, picking up Spider-Man and babbling about her prime directive as she punches a hole in the ground. MJ appears on the scene just in time to see her husband taken underground, into the subway tunnels.

Seems like Silvermane’s plot isn’t too different from last time we saw him. Too bad Cloak & Dagger aren’t still hanging around.