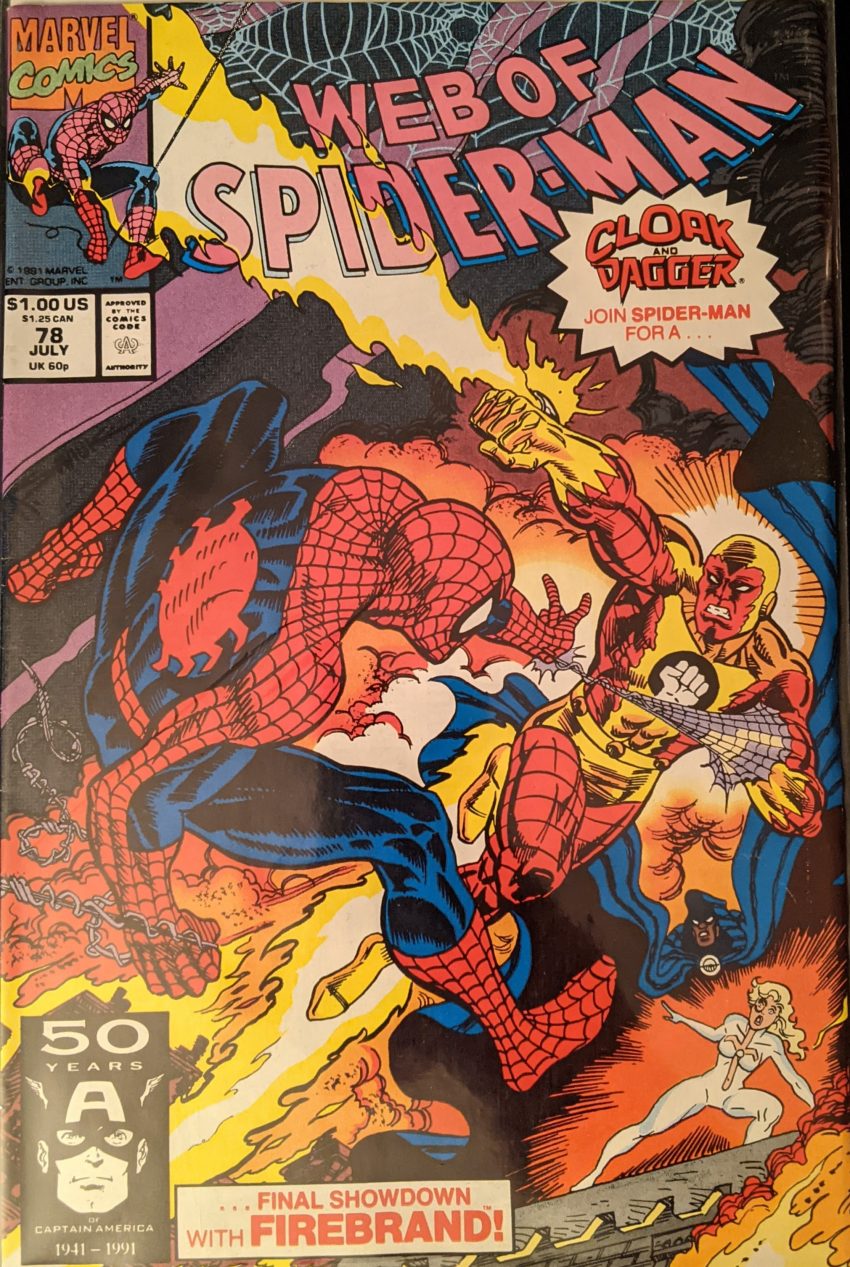 Well, alright. Firebrand’s weird fist logo sure seems out of place in the rest of the suit. Just Keith Williams inking and Nel Yomtov coloring this time, as we find Spider-Man trying to keep the ceiling from collapsing on Anna and the Morlocks.

That was a surprisingly intense sequence, well done by the whole team. Meanwhile, back upstairs…

So, Firebrand is just a deranged jerk, got it. I guess that’s pretty 90s. As he does his thing, we check in with the regulars, and they’re all messed up, mayn unconscious and the rest injured, as the floor begins to give way beneath them. Betty Brant and Ben Urich barely save Joy Mercado from falling into the floor. Aunt May is panicking, wanting to know where Peter is, and even Willie Lumpkin starts making up excuses for his absence to calm her, saying he was thrown out the front door by the initial blast. We see Kate Cushing, Nick Katzenberg & Glory Grant all unconscious on the ground as many of the cast begin to gather together. Felicia dives Flash out of the way as part of the ceiling caves in on them. It’s a mess. This is one of the more unusual bits I’ve ever seen in a Spidey comic. Almost literally everyone Peter knows is in serious danger that just keeps getting worse.

Cloak & Dagger engage Firebrand, but for no obvious reason, the cops assume they’re all in it together and come after all 3. Then a… a Detective Rusty Nales shows up. Seriously. Seriously? She knows C&D and vouches for them. That name is killing me. Anyway, Cloak & Dagger get back into it with Firebrand, while, down below, Spider-Man & Ent are trying to dig their way out, but the tunnel begins to flood. Man, nobody can catch a break this month!

There’s a lot to keep up with this issue. The assembled supporting cast manage to get on relatively solid ground, but before they can get too comfortable, Randy & Amanda smell a gas leak. Outside, Cloak & Dagger are having a tough time containing Firebrand, and then he’s kind enough to stop and tell us his origin.

Kind of a confusing page. This guy seems like a very generic villain to match his suit. Down in the Earth, Spidey and the gang stop when Pester sees a light in the ceiling. Our man hops up to take a look, and Munson, the guy who ran the homeless shelter and seemed to know Firebrand, falls down on them, burned and dead. There’s no time to even be freaked out, tho, as Spider-Man begins lifting the others up into what turns out to be the ballroom everyone else is in. He quickly webs the  gas leak, and is relieved to see all his people survived as he & Ent rush for the doors.

Spider-Man flips over his foe, and in a very complicated bit of web work, webs his fire shooters and then crisscrosses them, quickly enough that Firebrand tries to burn them loose before noticing he’s aiming at his own chest. The reaction makes him pass out. When Firebrand wakes, he’s shorted out his suit and all the people he put through the ringer tonight are angrily standing over him. Spidey says the cops will handle him and advises Cloak & Dagger to join him in taking off. And then we make a jarring and not really described jump ahead…

The complicated J. Jonah Jameson. That was quite a story. Too bad about the rushed ending, but otherwise, pretty unique. Kavanaugh seems to have a real affinity for The Bugle staff, and I’m all for that. The casual acceptance of The Morlocks in this story was kinda uplifting, frankly. A nice little 2-parter. We’re not leaving Web just yet, tho.