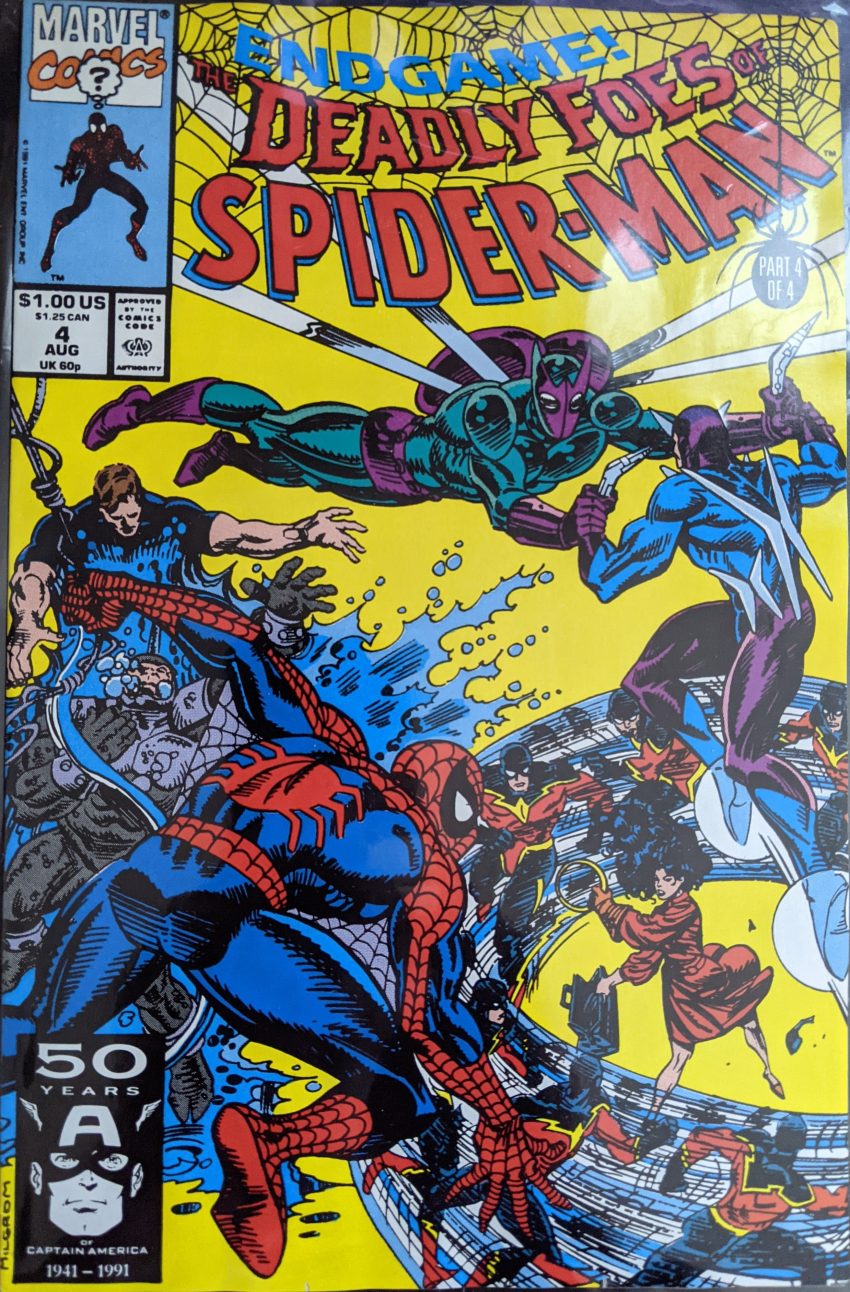 Looks like it’s everybody vs. everybody in the big finale. This issue adds a 3rd inker who is only credited as “Candelario” and sees Paty Cockrum return on colors. Everyone’s fighting like on the cover, minus Spider-Man.

For someone who’s been dissing The Ringer’s rings for 2 issues, Leila sure did make short work of someone with those rings.

As Beetle’s electricity zaps off pretty far in various directions, the order comes down from the city government to the cops to concentrate on keeping people away and safe rather than engaging the villains, but the local police chief’s not interested in waiting. Meanwhile, Boomerang pries open Beetle’s helmet as Leila rolls up and asks him if he remembers her husband’s rings.

One has to wonder where Boomerang keeps “a million” boomerangs. Is Rhino switching sides? Does it really matter? Speed Demon breaks loose of the rings and ralles Hydro Man, and the fighting continues. Leila barely avoids having a car thrown onto her, losing her rings in the process, but she produces a pistol and hopes to shoot Beetle in the face. Spider-Man finally arrives on the scene, but we cut away to Kingpin before he can do anything. Kingpin’s gu, Pembroke, is informing him of the chaos, and Kingpin is loving it. Then back to Spidey trying to size up how to enter this weird war zone.

Leila covers Beetle in rings and does a lot of talking as she places one around his neck and waits for it to kill him. Back at the police station, that mystery cop goes into the aforementioned Room 101, some big computer deal, and makes copies of a bunch of floppy disks, no matter what that video from that meme said. If this was Kingpin’s plan along, this is extremely stupid. Back at the fight, Spidey is saved from Hydro Man by Boomerang, accidentally, but then Boomy decides to give up on all this and flee. Spider-Man grabs him, tho, and gunsk up his boot jets with webbing, even as that cop leaves the precinct.

No honor among thieves, apparently.

Milgrom’s really fallen off since his run on TAC.

Well that was a lot of exposition after the fact. What a ridiculous plan. But I guess it worked. We cut to 2 weeks later, as the doctors tell Rhino they can’t help him, as planned. But as he leaves, he overhears them saying they could have cure him if Kingpin hadn’t told them not to. Rhino is furious, but decides to think like The Beetle and develop a plan. In a very rushed sequence, that plan turns out to be kidnapping the doctor’s kid, blackmailing him into helping, getting freed from his suit, and then saying he’ll end all the doctor’s troubles in a way that sounds like he’s gonna kill him. But, 2 days later, Peter Parker gets a call from The Rhino at The Bugle, saying if his buddy Spider-Man wants to save some lives, he should look for a red truck with Delaware plates at a certain address. So he goes…

So why did this have to take place before ASM 344, then? Rhino could’ve just as easily quit after that and done all this. Bah, whatever. This series has a strange mystique around it when I was a kid. Both Marvel and the handful of kids I knew who read comics acted like it was a big deal. But, as I mentioned, I passed. And I sure don’t feel like young me missed much. Not sure what all the fuss was about. But at least now I know how it went, after all these years.