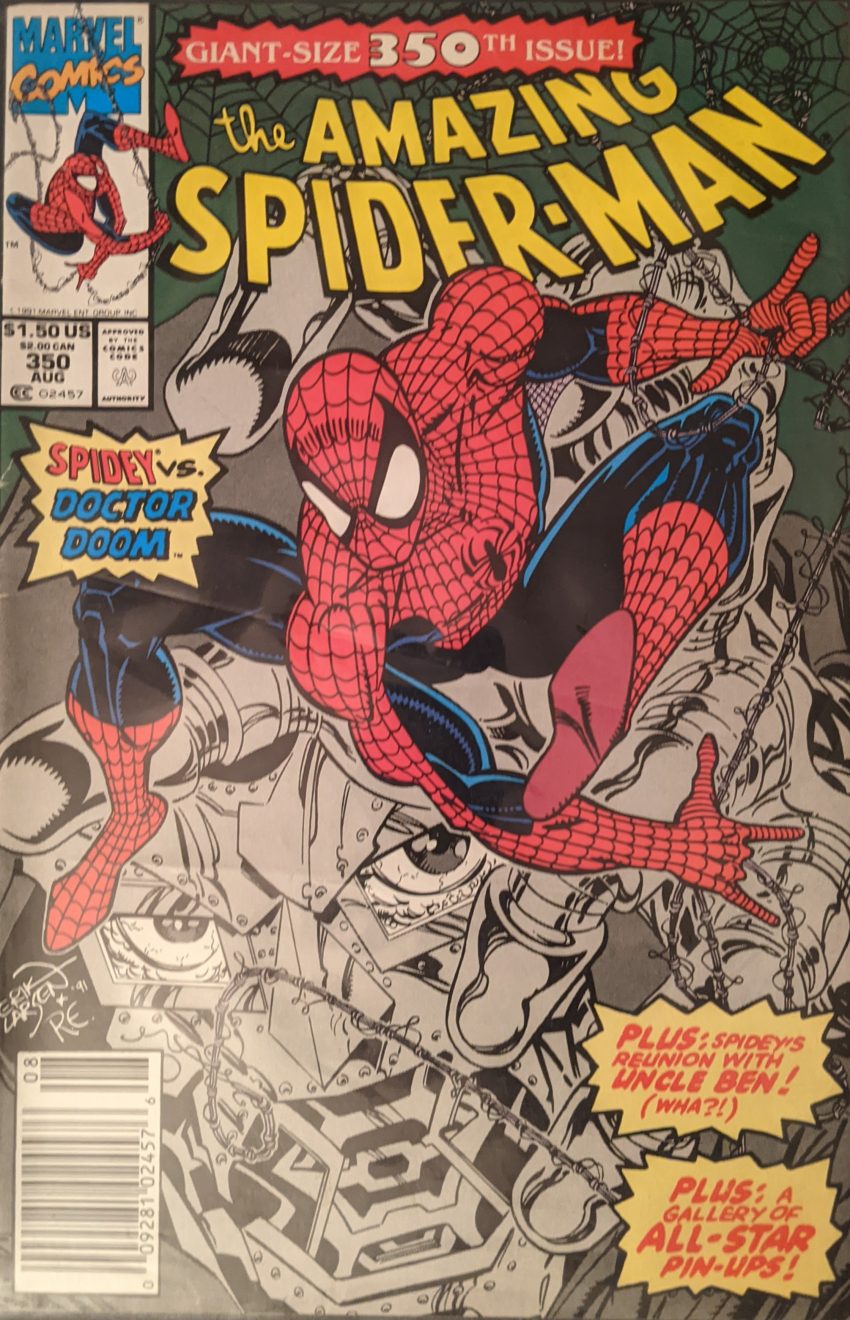 Look at all we are promised this time. I may have been skipping ASMs sometimes, but even a very new comics nerd is quickly programmed to care about anniversary issues, so here we are. Let’s get to it. This month’s pun title is “Doom Service.” That’s, like, not even trying. Ol’ Victor is still eager to get his hands on Black Fox from last issue.

Somewhat unsurprisingly given last issue’s exposition, we learn the bunch of European royal gems Fox stole to finance his current gig included The Dragon’s Egg, which belonged to, you guessed it, Dr. Doom. But, as we also know from last issue…

The idea of someone grabbing Dr. Doom, the most fearsome villain in the Marvel Universe, by the cape and just chucking him into the distance is really funny to me. Spidey leaps to the ceiling to try to get some distance from the inevitable counterattack, and Doom collapses the whole thing on him with lasers from his fingers. He’s about to cut Black Fox’s legs off with said lasers when Spidey jumps back into the fray, now pretty badly beat up, and gets punched through a wall and into several other walls for his troubles. Rough night.

Leaping away saves our hero, but only just. His costume’s in tatters, he looks like he’s got burns on all his exposed skin, and Doom is still coming. He flees into a nearby gym, but doesn’t get far. He keeps trying, avoiding being electrocuted and then webbing a big rack of weights onto Doom, but nothing stops him. Spidey leaps out a window just int time to avoid being blown to pieces and finds a dock, hoping to escape on a jet ski.

Quick thinking by the battered Spider-Man. It’s always nice to see a writer give Doom his respect. He can fight the whole FF by himself, he’s subdued The Silver Surfer and stolen the power of The Beyonder, he will go on conquer entire planets, he should be able to overwhelm Spider-Man. But, ya never know in comics. Sometimes Spidey can just randomly punch out Firelord, and Doom’s been jobbed out before (Rather famously to Squirrel Girl, even). It’s just nice to see him done right. Spider-Man has survived, but has no idea how he’s gonna find Black Fox. Speaking of whom, he gets home and realizes he has to get that emerald back, but he’s an old man who just had a near death experience, so he goes to sleep first. The next morning, Peter’s feeling better, but his head’s still spinning and the thought of swinging around makes him sick. He decides to take the day off. Fox, meanwhile, finds out his fence already sold the Dragon’s Egg, but will perhaps tell him where it went for “everything he has.” Hard bargain.

All the little things Larsen does here to make sure you know Peter’s hallucinating are nice. Also, the way he dutifully reproduces that famous but baffling shot of Spidey realizing who killed Uncle Ben, pupils and all. As Peter is rushed to the hospital, we check in on Doom, literally counting the seconds until he can either get his emerald or his revenge, so obsessed he’s ignoring a goon saying they have some info on it. Hours later, Peter is diagnosed with a mild concussion, MJ by his side. He told them he fell down a flight of stairs. He’s given some pills, but when the doctor says she’d like him to stay overnight, he refuses.

“–don’t ask me to understand suicide.” Fair point from MJ. And also, with the tracer, Peter has a better chance of finding Fox than Doom. If they both laid low, they might be able to ride it out. But, Spider-Man is Spider-Man, and The Black Fox is driving to New Jersey to try to get the gem back. He doesn’t know that Spider-Man hitches a ride on the back of his car as he drives out of the city to the estate of one “ millionaire recluse Andrew Carpathian.” Fox disables security and security guards and makes his way inside, tailed by Spider-Man.

Well, hey, continuity! This is the first time I’ve ever read this comic having seen those issues of Spectacular. It’s funny what you can just take at face value reading comics. I didn’t trip over this at all as a kid. Ok, Spidey’s fought whatever this is before, he’s done a lot of things I don’t know about. Comic folk today are so, so very scared that if you mention an earlier story, new readers will be confused or put off, despite the fact that that’s how comics have worked since the 60s without dying off. Anyway, Spidey dives in, and to his credit, Black Fox does, too. Fox’s smoke bombs give them some advantage, but Spidey’s in bad shape and overdue for his medication, taking hits he would easily dodge on a better day.

Just as our man’s about to be overwhelmed, the wall bursts in and Doom has arrived. He zaps a bunch of cultists who come at him, but has no intention of helping. When he says so, Spidey dives back into the fray, helped at least by Doom’s confusing presence as he smashes his way through the swarm of goons even as he’s close to blacking out, until…

The visible “X” that indicates the blue in Spidey’s suit was supposed to be black in panel 5 is funny. But there you have it. Spider-Man finally taking Black Fox in is a nice change of pace. Hard as it is to believe, Black Fox is still a thing in contemporary comics. They’ve wrapped his deal up with Black Cat’s, even. Marvel and it’s immortal elderly characters, I tell ya. Not bad for an anniversary issue, tho. The best of all villains, impossible odds, and a win for a change. That just leaves the all-star pin-up gallery. But it’s not what it sounds like. Usually that’d be images from all sorts of famous folk, but for this one, it’s Erik Larsen drawings inked by famous people. Which is actually kinda cool, letting you see his work in different lights, drawing some attention to the importance of the inker, and no doubt giving Erik and his collaborators some big original art sales. First up:

We’ve seen a lot of examples of Jazzy Johnny finishing others’ pencils so heavily they look like he drew them, but this is different. A synthesis of the 2 artists, but more Larsen than Romita.

Joe Sinnott is the gold standard at Marvel, and he does great work with Erik’s pencils. This bright render of the FF would’ve made great models for a cartoon. And the legends just keep coming…

Immaculate Al Williamson, one of the best to ever do it. This one really feels influenced by some of the stuff Frank Miller drew for Spider-Man in the early 80s, which would be appropriate.

Sal always gets short shrift. Didn’t even get to do a Spider-Man piece. Sal’s inking is like a good drummer, doing the work without drawing attention to itself. He was a little more experimental on his own work in the mid-80s, but he always treats another penciler right. And finally…

Even as a kid who thought Todd McFarlane was the greatest artist of all time, that wrist looked all messed up to me. Sheesh. It’s like broken in 2 places. You can basically see Todd going “oh, his hand’s going to go off the page, I don’t want that.” You almost never see Larsen ink himself in these pages. The fact that it doesn’t look too different from when Randy Emberlin is doing it is a credit to him. And that’s that for #350.