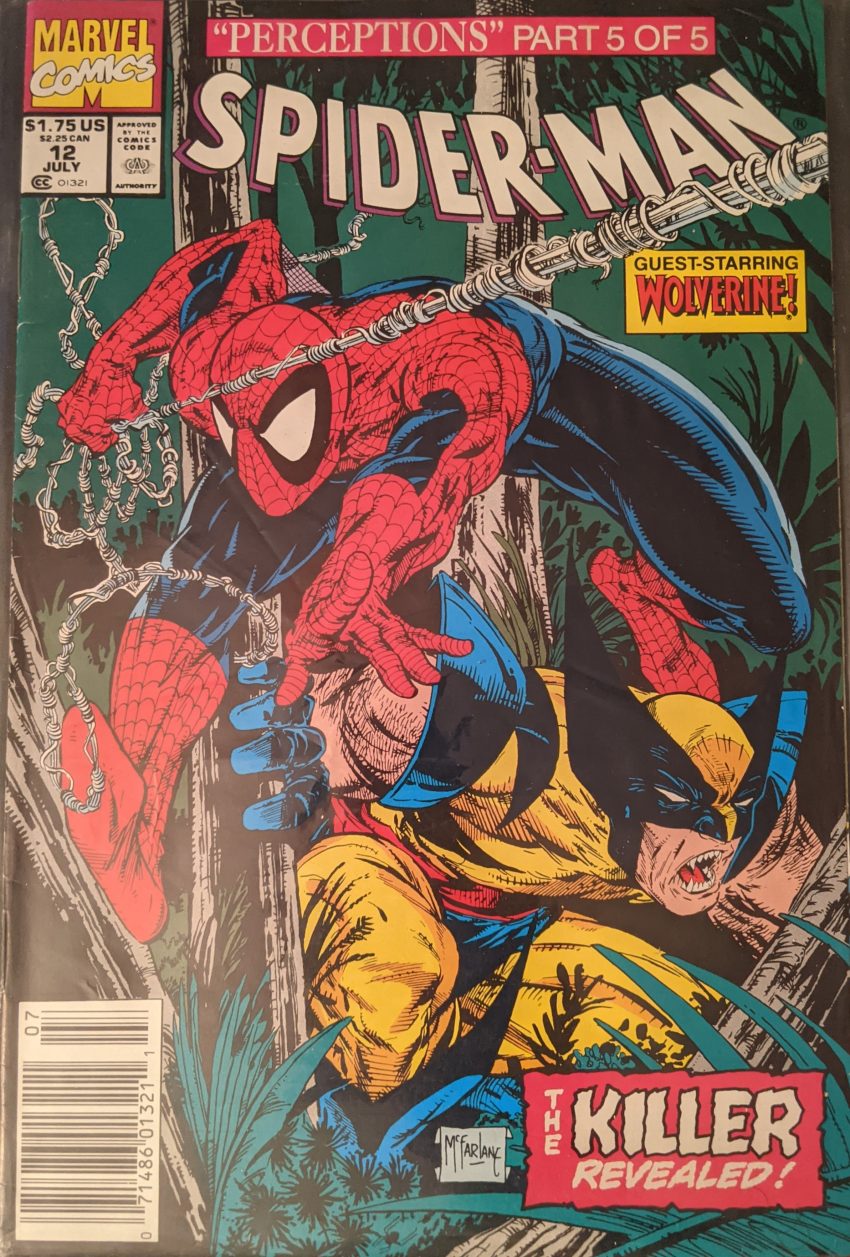 Who could it be? Todd has only really set up one suspect. Jim Lee’s longtime collaborator Scott Williams is back to ink 2 pages this month, and one of them is obviously the splash:

Todd is obviously in a hurry on the art this month. That time he was down sick seems to have really gotten him behind. Logan won’t hear any of Spidey’s protests, and neither will Wendigo, howling at the suggestions. Logan says he’s going to town to finish this, and Spider-Man’s staying here. He even threatens to expose his secret identity if he doesn’t play ball. Our hero reluctantly agrees. He tries to cover up the corpse, but is forbidden to by Wolverine (And another bellow from Wendigo), saying he needs to the body out in the open to get a confession. I’m not sure that tracks, but I’m not in charge. Wolvie tells Spider-Man Wendigo doesn’t eat human flesh even tho that’s literally how he became The Wendigo, and to sit tight. Spidey asks for one reason he should go along with this.

I distinctly recall my cousin Brandon reading this page to me. My family was visiting his, and I didn’t have this issue yet, and he thought the “I’m a moody little cuss” line was so funny I had to see it/hear it. Funny, the things you remember. Wolverine has largely been saying the same thing over and over in all his scenes for like an issue and a half, and it still makes no sense that Spider-Man doesn’t want him to go find the real killer when they have no other options. But Spider-Man shoots at web at Logan’s back to keep him from leaving for some totally inexplicable reason, and Wendigo cuts the line, and that’s that. Switching to his trademark civilian clothes, Logan heads into town and IDs the villain, tho we don’t see him yet. Again, there is one suspect to choose from. I guess maybe two, I guess he’s hoping you see two, but I didn’t, even as a kid, and don’t now. We cut to Anna Brooks, whose hair has completely changed and grown out like a foot since last issue. She’s trying to write her column, but Peter’s sown doubt in her mind. Then, a cameo from some guys you’d think would’ve shown up by now:

Canada has one whole superhero team, Alpha Flight, and they’re old friends of Logan’s. Why wouldn’t he let them help? He went looking for help from Spider-Man. He doesn’t even really know Spider-Man. Anyway, Wolvie’s narration tells us he got the cops to come their way by saying Thorpe has Wendigo pinpointed (How?) and he then goes and abducts Thorpe out of the woods. I guess he’s been out there for a day now? I dunno. He says with Thorpe in hand, he can end this clean. He returns to Spider-Man and Wendigo, always shown with an arm off-screen, and tells Spider-Man to go stall the cops. Uh, ok. Spidey says if Wolvie can really end this, he must, and takes off. While Spider-Man webs various cops from the trees, avoiding being seen, Logan leads Inspector Krahn to the new body, where he has Thorpe tied up.

Speaking of Twin Peaks (Uh, a few months ago), I think Todd is inspired by a famous sequence from that for these pages.

Spider-Man spends a page webbing up more cops, a guest star in his own book, lamenting how hiding his identity has hindered his ability to help.

I mean, the only one acting guilty was Krahn. He leaked the info to the press, he stalled the autopsy, he didn’t want people to see Peter’s allegations that a human killed the boys, and he called in Thorpe to get The Wendigo, so Thorpe never felt like a suspect to me, especially after he voiced concerns about a human killer, too. Who else could it have been, Anna? There’s not enough characters in this story for it to have a shocking twist. 24 hours later, Wolverine, still the main character of this story, narrates how Thorpe and the tape got the truth out. Krahn was shot by one of the hunters he worked into a frenzy. Anna Brooks’ factual account of what happened got buried on page 20 of her paper, the media, we’re told, having lost interest immediately when the bigfoot angle disappeared.

What in the world is Peter talking about!? Wolverine’s plan was the only available solution, and he didn’t even kill anybody! Nonsense! Ugh. What a mess, indeed, Logan. In the letter column, a frequent refrain from Todd comes to a head:

Anytime he prints a negative letter, he says something outrageous like “Just forget about all other Spider-Man comics and also your own tastes and interests and maybe you’ll like it.” In every letter this month, Salicrup’s comments have stopped being playful jabs and become direct contradictions to everything Todd says. Another reader questions Spider-Man’s brutality when dealing with crooks, and Todd says Spider-Man only hurts people who deserves it, with Salicrup chiming in to say he agrees with the reader. Then there’s this:

Every month in these columns, Todd is all-too happy to really dig into why all the comics I’ve ever read by him, even ones he didn’t draw, are meandering, nonsensical wastes of time: He doesn’t much care about the writing. And sadly, despite my feeling on the topic, due to childhood fanboy-ism, I have read a ton of Spawn comics written by Todd. Speaking of Spawn, while Salicrup is right in every case, it’s no surprise Todd’s about to quit this book and mainstream comics in general. You can see him chafing under even what little oversight he has on this title. I mean, you got his “editor” saying he doesn’t agree with his story choices or personal philosophy when discussing already published comics, it doesn’t seem like Todd’s being told what to do, really. But “no one’s getting it,” so it’s time to go where no one can tell him anything. Ah, well. Get ready for the absolute polar opposite approach to making comics in the next post.