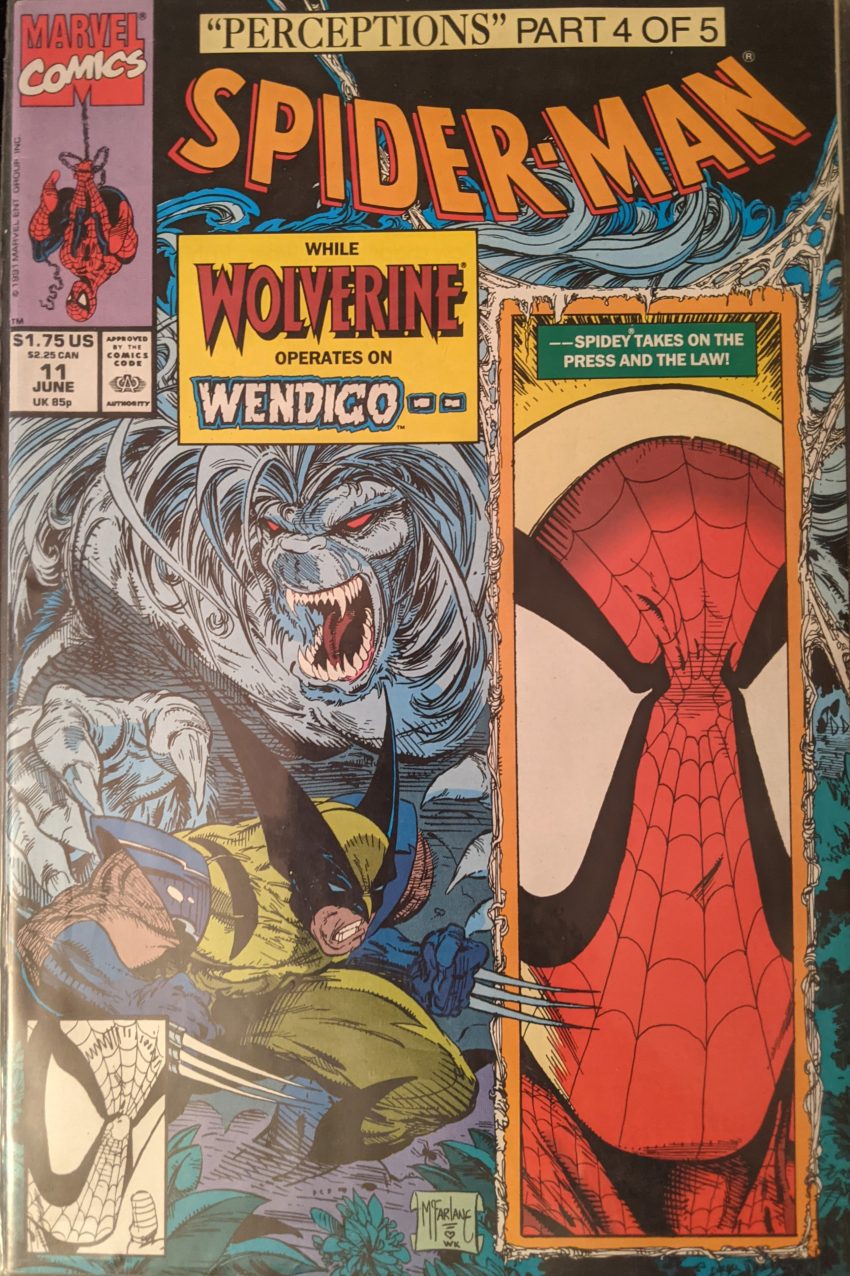 This cover’s description of what happens inside isn’t really that exciting. Unless Spider-Man is gonna fight the press. This month, it’s just Rick Magyar pitching in on inks. Rick has a long and distinguished career in the biz, and is perhaps more available than the superstar guest inkers last issue. He’s also the one who doesn’t really know what to do with the material, as we see when Peter goes to see Anna Brooks under captions of one of her stories.

It’s funny, Rick’s burying Todd, but he’s kinda helping him. I mean, look at this one:

Is it almost unrecognizable as McFarlane? Yes. Are the faces more accurately proportioned and less weird looking? 100% yes. As a kid, of course, this was blasphemous to me. When Peter won’t reveal his source (And, I mean, how would he possibly know this?), Anna accuses him of trying to sabotage her for progressional jealousy and kicks him out. On his way, he asks a few questions that poke holes in the Wendigo story to leave her with something to think about. Meanwhile, out in the woods, Wendigo has lost so much blood he’s about to pass out. It saunters up to a stream and does the ol’ water on the face bit, but passes out in the stream. Wolverine appears, saying someone will pay for this and “Spidey better be doing his job, ‘cuz I’m getting tired of waiting.” For his part, having struck out with Anna, Peter-as-Spider-Man decides to go to to convince the cops. Looking like he’s got a full diaper.

I believe that last one is the 2nd page Todd has inked this month.As he successfully extracts the bullet with a claw, Wolverine thinks he’ll give Spider-Man 2 more hours, and then he’ll go into town and sniff out the perpetrator himself. Why wasn’t that Plan A? He can easily do that with his heightened senses. Easier to pin this on a person than “some unknown assailant.” In town, Peter has found Melvin, who isn’t at all interested in his angle. Also:

So the super tracker has his doubts, too. Back in the woods, Logan tells the weak-but-waking Wendigo (Alliteration!) that they have to find another body to seal their case. We’re told the creature doesn’t understand, but trusts its instincts, and therefore, its old enemy, Logan. In town, Spider-Man spends 2 pages saying not much at all (In typical McFarlane fashion. Why does he have so many scenes of people just blathering?) before deciding to go meet Wolverine, who won’t be happy that Spider-Man has… failed to talk the press and the law into believing his seemingly far-fetched theory with no evidence? That was their plan? Meanwhile, Logan digs up another body.

4 issues. 1 action sequence. It’s really shocking to me. In the letter page, McFarlane makes the interesting assertion that he’d like to get “computer coloring” on the book. Jim Salicrup rightly notes most readers probably don’t know what he means, but “we’re looking into it.” About a year from now, digital colors are going to make the already eagerly anticipated Image Comics by the industry’s biggest artists look even more unique and exciting, and none would have more advanced colors than Todd’s Spawn, thanks to colorist Steve Oliff. Marvel and DC are going to be left playing catch up for several years (In a lot of books we’ve seen already). Todd tried to help ‘em…