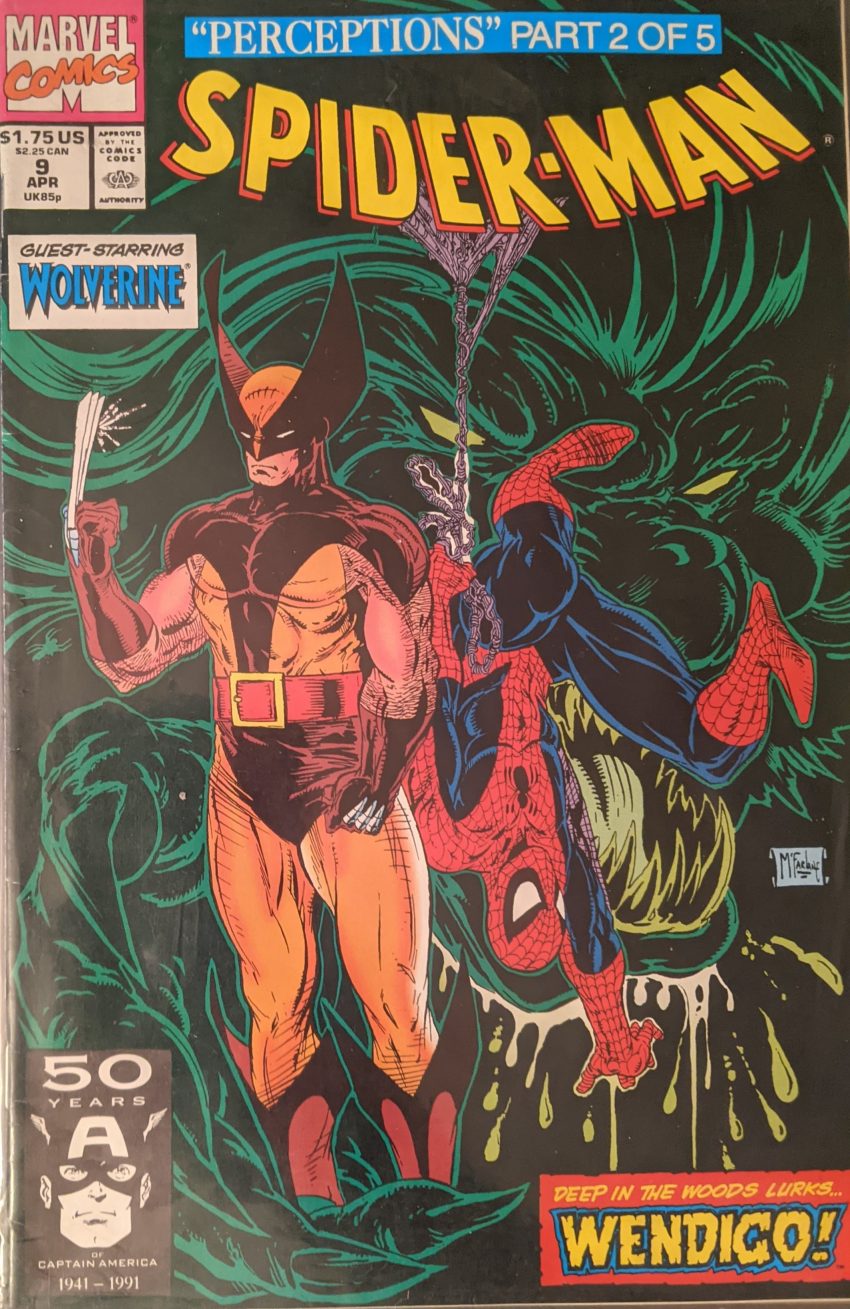 This cover is almost incomprehensible. And even though I’ve stared at it enough to see it properly, I still see Wendigo with a big long cartoon nose and want to read the whole light green area as a big cartoon dog tongue. Any of the many superheroes who wear underwear with a belt, McFarlane would draw like this. Belt way up like he’s an old man. Gigantic drawers. The hottest artist in the game! Surprising restraint on the claws, tho. Those claws would more or less fit inside Wolverine’s forearm, which is more than you can say for most people who draw Wolverine professionally. Am I stalling because I don’t even want to read this comic? Maybe! Wolverine has caught another hunter. In his tuff guy narration, he both says they’ve killed five dozen innocent animals and also says it’s dumb for them to be hunting Bigfoot because “no animal would stick around this kind of warzone.” Um.

Wolvie’s conservationist streak here is fully in character and all, but if he wanted the killing to end, maybe he could, like, be a superhero and solve the murders? Just a thought! Logan lets the guy go, telling him to telling his friends to stop shooting animals and also to tell no one of their meeting. And when the guy gets back to his hilariously boxy vehicle, he finds “YOU PROMISED” scratched on the side, which is also hilarious. Wolverine as you’ve never seen him before: Keying cars like a spurned lover! Later Peter Parker is having breakfast with the improbably named MELVIN GOONER, who, we learn, puts ketchup on donuts. Maybe he’s the killer, man, that’s deranged. Peter tells Melvin if he eats that, he’ll throw up.

As they further discuss the case, a broken bottle smashes through the window of the diner, zipping past Melvin’s head, which seems… someone should try out of the Major Leagues, I think, if they can do that. Peter goes outside to investigate.

Wendigo, you say? That night, Spider-Man is on the prowl for answers. He notes that he can’t let anyone see him like this in the same place as Peter Parker. In these situations, I always feel like he should just pack black clothes and a ski mask, but I guess you gotta sell Spider-Man comics. He heads over to the RCMP building hoping to score a lead, but we’re told he waits around 2 hours before Anna Brooks, the reporter from last issue, shows up to confront the police chief. What time is it?

It’s always really obvious what parts of a page McFarlane was interested in drawing. Spidey tails Brooks for awhile before deciding Peter Parker should be the one to talk to her. We cut back to the cop calling in a  tracker called Luke Thorpe to take care of the beast, then back to Brooks as Peter rolls up to her on the street without even introducing himself and says, “Thought you’d like to know that this creature you’re chasing is called Wendigo.” What? He doesn’t know that! But he gets her attention and they go for a coffee.

That sure is a weird chat! Over a full-page shot of a sleeping Wendigo, Anna says she feels weird about the boost this is giving her career, and that her job is to sell papers, even if she doesn’t have all the facts, which… I’m pretty sure is not her job. Elsewhere, Wolverine is finally on the case, investigating the spot where Anna hit Wendigo with her car. He recognizes its scent, and that confirms his worry. But as he follows the scent back to where Wendigo pulled the body out of the ground, he realizes there are more bodies there. He says he has to find someone in town he can trust. Meanwhile, the aforementioned Thorpe has found The Wendigo, good as his word. As Spider-Man swings back to his hotel, a shot rings out.

The structure of these issues continues to just be wild to my adult eyes. This is such a 2000s Marvel comic. The long arcs, the pacing, the minimal cast. It’s been 2 issues without a fight scene! Rather incredibly, Todd was really ahead of his time. In the letters, he says he plans a sequel to Torment around issue 22 that will provide some answers to all that nonsense. Heh. Shouldn’t have planned to wait so long…