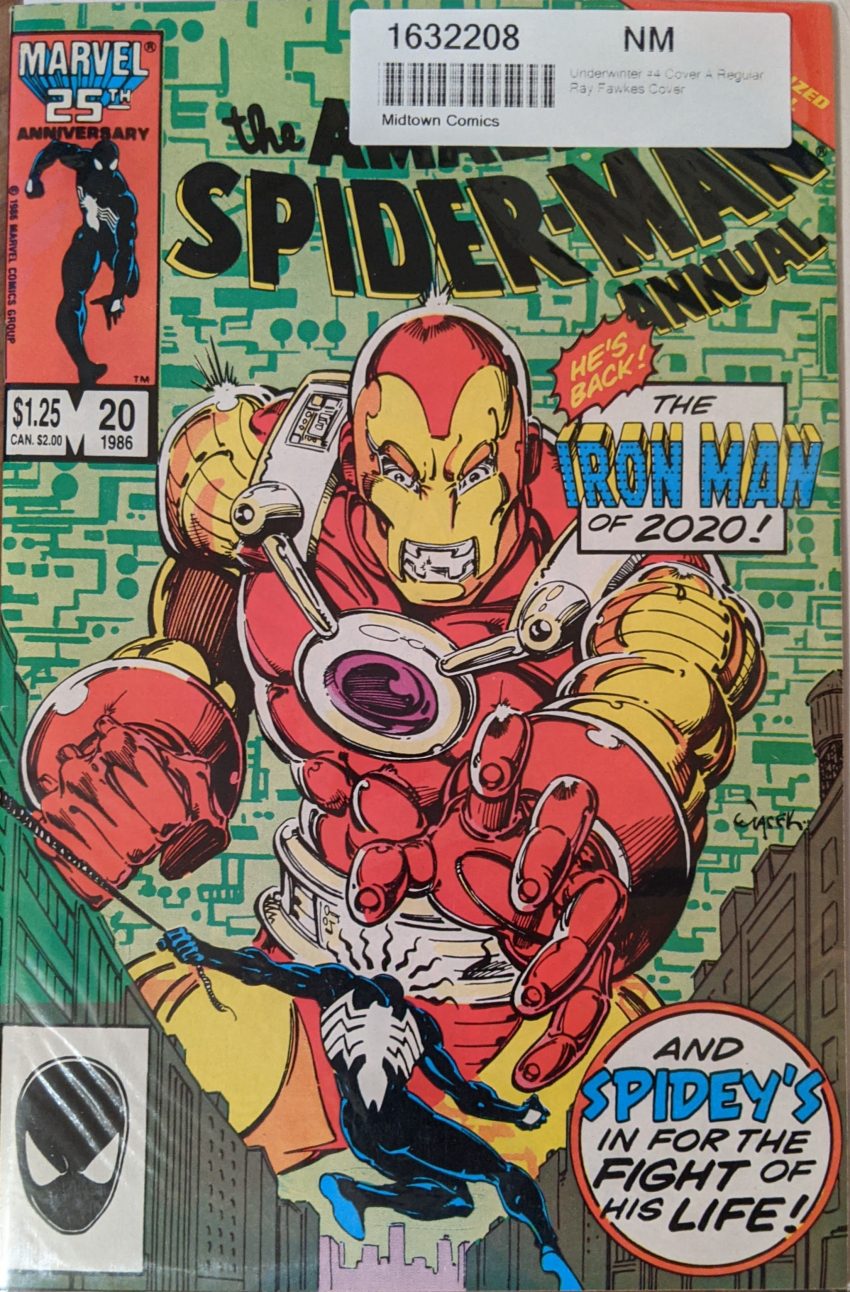 I don’t think it’s the first, but this is one of several books I got in The Great eBay Hysteria of 2018 that didn’t come in a bag, so I recycled a mycomicshop.com bag with a label for some other comic on it. Waste not, want not, eh? Yes, it’s the Iron Man from that far off, unimaginable future time of… 2020. 2020 wasn’t THAT far in the future when Arno Stark, Tony’s descendant, was created in a Machine Man miniseries in 1984. I mean, writer Tom DeFalco (Heard of him?) must’ve realized he would still be alive to see how wrong he got it. And he is. Jump ahead 100 years, minimum. Anyway, this is ol’ Arno’s first appearance since that miniseries, which, as it happens, I own, but have not read. I got it at an estate sale in like 2016, alongside some really cool stuff like Jack Kirby’s adaptation of 2001: A Space Odyssey, the previously posted Death of Captain Marvel, and others, but haven’t read it yet. It’s perpetually on the “to-read” pile. Maybe I shoulda read it before this, but I didn’t! This one’s “based on an original story by Fred Schiller,” our 2nd mystery author in a row. Fred here created “the original story” for this annual, and in the mid-90s, he’s credited with 8 issues of Professor Xavier & The X-Men, an attempt to modernize the earliest X-Men stories, aaaaand that’s it. He, too, has no Wikipedia page. The script is by Ken McDonald, who wrote this and a single issue of Dazzler, aaaaand that’s it. What’s up with this? Pencils by Mark Beachum, so hold onto your (skintight jeans-clad) butts, inks by Bob Wiacek, and colors by Bob Sharen. Despite being billed as The Iron Man of 2020, we meet Arno Stark in… the year 2015? What?

So there’s some of his deal. He’s Tony Stark’s “cousin once removed,” and bought the company. Instead of being a superhero, his Iron Man is a mercenary, and he’s trying to perfect time travel. He flies to some lab or something, and that Hawk guy is waiting for him? How’d he get there before Iron Man? Arno’s there to demo a “planetbuster bomb” for some generic military guys. But Hawk bursts in (That guy’s everywhere) to want him that a terrorist who looks like White Deathlok named Robert Saunders has learned of the bomb, and will “destroy Stark Enterprises” unless the reveal its existence to the world by 6pm, a warning Arno ignores. Cynthia calls looking for Arno again, and is once again cut off by Hawk. This is a weird intro. So, Cythnia decides to take Arno, Jr. and crash the lab to show her husband they can’t be ignored. That seems like it won’t end well. Later, Arno’s demonstration doesn’t yield the devastation the military is looking for, and he worries that he’s sold his soul.

Yes, Arno just flew out of an X-Wing from Star Wars, and that is not the last bit of design that will be egregiously stolen from those movies in this comic. What, like no one would notice? Arno arrives back at the lab just as Saunders is stealing a vehicle to escape, and you don’t have to wait long for more Star Wars, because

Arno’s attempt to stop Saunders ends up exploding him. So now no one can defuse the bomb. Whoops. Only his retina scans can stop the bomb. But it turns out he was in a highly publicized incident with Spider-Man at 12-years old in 1986, and Arno has a time machine, so guess what?

Spidey handily wraps up Blizzard and his goons, and even gets some photos from The Bugle out of it. He tries to sell them, but Kate Cushing isn’t in. And while he’s in The Bugle, he notes a 12-year old kid imitating him as he walks down the hall.

Beachum manages 3 butt shots in a page with only one (unnamed) female character in a speaking role.

Oh. I guess I’m reading this too early, since Now Magazine hasn’t opened yet. Oh, well, I’m committed and I don’t much care. Most of these annuals, I can’t find out when they came out other than the year. I just guess. Our man’s so happy he just swings in MJ’s window to tell her the news, despite her protests that someone might see him. But when she learn the news,she reminds him tomorrow is Aunt May’s birthday. Uh-oh. Jumping to the next day, we see Peter preparing to leave, anyway, saying he’ll call her from the airport. Spotting Mrs. Muggins in the hall, he switches to Spider-Man to sneak out the skylight, but…

All things considered, that is a surprisingly restrained depiction of Candi & Randi. So this child of some rich person just went to Peter Parker’s apartment unaccompanied in 1980s New York? Oooookaaaaay, Spidey drops the kid off at The Bugle because he refuses to say where he lives, and then bolts. But as it happens, Blizzard, already out of jail a day later, is driving around in a van looking for Spider-Man. He can’t catch him, so he kidnaps the kid he saw with him. But…

All this printed computer text is so small it’s hard to read. Iron Man 2020 doesn’t care about Blizzard and just zaps him, seemingly to death, and prepares to maybe steal the kid’s eyeball.

Spidey is really confused, and wonders if maybe he should just hand the kid over to Iron Man. He is an Avengers, after all, he’d know if the boy were dangerous. But when it becomes apparent Iron Man is willing to kill the kid, he changes his mind. For his part, Iron Man is frustrated because his weaponry is so deadly he can’t really attack without probably killing both Spider-Man and his quarry. But he zaps at them, anyway, and blows several skyscraper windows to bits, which badly injures Bobby. And that makes Spider-Man angry enough to stop running.

Spider-Man, who recently beat a Herald of Galactus into submission somehow, now thinks he doesn’t have what it takes to beat Iron Man. What a dumb story that was. So now he beats Iron Man 2020 into submission in his fury, damaging all his systems and rendering him pretty useless.

All’s well that ends well for Spider-Man. However…

Nothing sells your shock ending like text that requires a magnifying glass. But even if it were easier to read, it’s just statistics about the blast. Rough ending for Mr. Stark. I believe this is meant to be a prequel, to show why Arno was a villain in the Machine Man series, but that could be a little clearer. He would go on to several other pretty bad experiences and, I’m told, later be… eaten by his own armor, which became a zombie. Really. Comics, man.