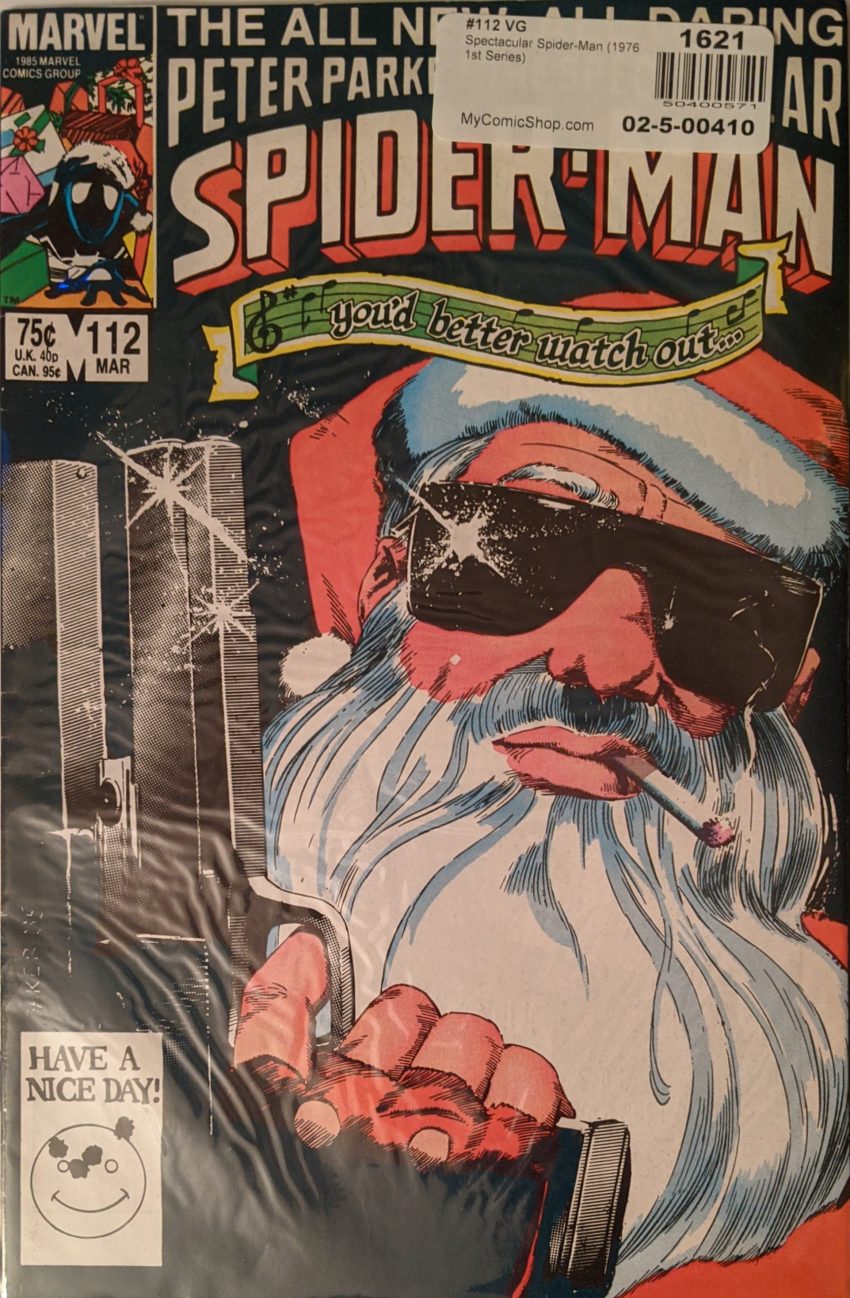 Back whenever it was we last visited this period, during The Death of Jean DeWolff, we saw a second story man who was robbing apartments dressed as Santa Claus. I guess it’s his time now. Peter David is joined by Mark Beachum on pencils, Pat Reeding on inks, and Nel Yomtov & George Roussos on colors. And with Mark Beachum comes more ludicrously over-rendered women’s jeans, as a guy steals a woman’s Christmas present on the street.

Forcing David to call it out, even. Come on, Mark.

As our hero leaves, he thinks you’d have to be “a Class-A dodo” to believe the guy’s story, so naturally we linger to see the woman believing it. Then he steals her watch. Great. Page 4 and I’m ready to pull the ripcord. Peter heads to The Bugle, where a strangely white-haired Joy Mercado kisses him under the mistletoe on his way to see Kate Cushing. Kate says he’s always here when she doesn’t need him and never here when she does, and he should get a beeper. In the issue’s first funny joke, he briefly imagines telling Doc Ock he has to go in a fight because his beeper’s going off, and then says he’ll think about it.

Randomly very Romita, Sr. Almost surprised Aunt May isn’t in skintight jeans. What’s the deal with emo Pete-o, here? He then asks the passing Joe Robertson what he’s doing for Christmas. He says Randy’s coming home and they’re all very excited. As Kate comes and gets Robbie’s attention, Peter sulks off. Robbie, too, tries to invite Peter to Christmas, but he’s already gone. This is weird.

How’s this gonna factor in? Meanwhile, at yet another subplot, our secretly sinister Santa is doing the mall Santa thing, and the kid he’s talking to is… Bambi’s? One of Peter’s three sunbathing neighbors? He begins to say he usually lives with a different family member, but Bambi cuts him off before he can say who (In tight jeans) and hurries him home. Santa is going to pay them a visit tonight. Robbing Spider-Man’s neighbors is probably not a good idea. Speaking of, he’s super bored, home alone. He tries calling Harry Osborn, but a screamin’ mad infant Normie cuts that short. And then Beachum really cuts loose when Peter tries MJ.

For decades, people were like “Why don’t more women read comics?” People can usually tell when a product isn’t for them, as it turns out. And the cheesecake continues as the bored Mr. Parker gets a phone call from someone who just hangs up, and it turns out to be Black Cat. Felicia is still sad about their break-up, and changes from a barely existent nightgown to her Black Cat suit to go adventuring for the first time since, we’re told. She stops some guys robbing a clothing store with as many butt and crotch shots as possible. This is, like, a Frank Cho level embarrassment.

I am so lost. Why is Peter acting suicidal? What is going on? Meanwhile, Randy Robertson calls Robbie to say there was an issue with his flight and “we’re” getting a hotel room. When Robbie asks who “we” are, he says he ran into a friend in the airport (Which is full of more butt shot ladies). But the truth is, he was bringing his wife home to meet his folks and has lost his nerve. Because they don’t know he got married, and also because she’s white. Of course, reading out of order, we’ve already seen this goes fine, but here it is. Anyway, now it’s late, and Peter Parker is asleep. So are neighbors Randi & Candi. But Bambi is troubled and awake, and also trying to sleep while dressed like she’s in a Jane Fonda video for some reason, when a noise from the living room leads her to learn Santa is robbing them. And he’s got a gun.

If nothing else, that’s some good Spidey banter. The other girls and the little boy all come out to see what’s going on (Guess how the girls are dressed. Go ahead, guess), and they get between our hero and the fleeing Santa, preventing him from webbing the robber. Mrs. Muggins bursts in wanting to know what’s going on, and Spidey just picks her up and moves her out of the doorway so he can chase our villain. He’s headed for the roof. But when he gets there, he’s seemingly confronted with the real Santa, and when Spidey gets to the roof moments later, the thief is gone.

What? Who’re these people? This was a mess of a comic book. Erratic story, bad pacing (Probably also Beachum’s fault) and all this sad girlie art stuff. Blah.