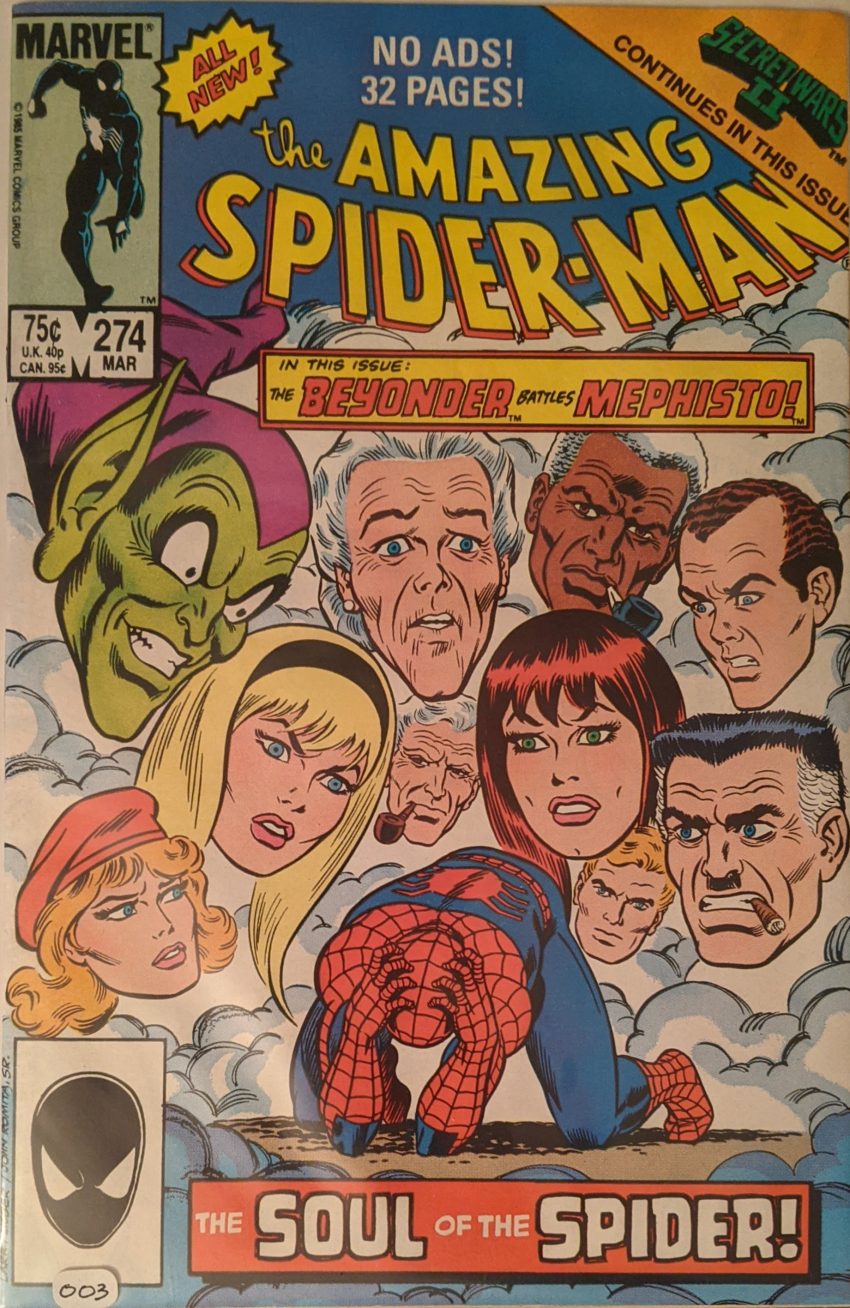 You know it’s serious when they give the ad pages to the story. You also know it’s serious because the inside front & back cover are a poster of the front cover. Rip it off and hang it on the wall! I bet a lot of people did. This one had a big impact on me as a lad. I don’t recall how I came to own it, actually. But it’s a very unusual and memorable Spidey comic. My childhood copy was so battered that I got a new one during The Great Ebay Hysteria of 2018, so that’s the one we’ll be seeing here. This issue has a ton of credits. Priest has mentioned that this run was always in danger of being late, so I guess this is an example. Therefore, it’s a story by DeFalco, layouts by Frenz, finished pencils by Tom Morgan & James Fry, finishes by Joe Rubinstein, additional finishes by John Romita, Sr., a Jack Fury is credited with “art assist,” and George Roussos & Co. are credited with colors. It was all hands on deck to get this one out on time. Not that I could’ve told you any of that as a kid. I’m looking forward to seeing how obvious all these hands are.

“I always knew you couldn’t beat The Beyonder. That’s why we trained you and generations before you to fight him.” Sure. As for The Beyonder, he’s hovering in a galaxy far, far away (Not that one) trying to decide what to do with this universe. And his goofy jumpsuit is now the famous white it has become known as. Suddenly, we’re told an armada of ships “from over 30,000 advanced galactic civilizations” comes after him. That is… a lot of civilizations. The idea of people being able to coordinate on that level is absurd to me. I know it’s, like, basic science fiction, but that’s so many people. Anyway, they fire a beam at him they say will destroy “a thousand inhabited worlds” in its aftershock, so serious are they about killing The Beyonder, but the beam just makes him take a step back. Then he wipes out the whole armada. And then their homeworlds. And then decides to aim even higher, targeting the higher powers of this universe, starting with:

Nice recap, Mephisto! His ploy winds up being to make a wager with The Beyonder for the life of the universe. The Beyonder only offers him another 24 hours, but Mephisto accepts. So they’re going to pit champions against each other. Mephisto asks who he gets, and The Beyonder tells him… Spider-Man. The most human of heroes, because after all, this is a contest to see if mortal life is worthy of existence.

Zarathos is the demon that was bound to Johnny Blaze when he became Ghost Rider. Turns out that was all Mephisto, too. Don’t worry about it. So: Big demon vs. Spider-Man! The terms are, because Spider-Man is so driven by responsibility, Zarathos must find a way to get him to renounce responsibility “in some concrete form.” Beyonder creates a giant TV monitor for them to watch the proceedings on. Mephisto is disgusted that his fate hangs on some mortal as the monitor focuses in on a hospital.

Spidey swings off on his way (With a caption telling childhood me for the first time that it takes a double-tap on his webshooter to launch the web, so he can’t do it by accident) to a old warehouse. Inside, is a ring of car thieves, and The Bugle got a tip the cops are about to raid them. He’s here to document it. But while he waits for the cops to show, he hears them saying some of them are going to kill The Kingpin tonight, at his 6pm reservation for The Century Club. The cops then bust in, and Spidey snaps his pictures and leaves. He thinks about how Kingpin is evil, but how could he let even someone that bad die? Back in Hell, Beyonder says this is the perfect test of his sense of responsibility. Soon, Zarathos appears to Spider-Man as a gigantic flaming skull, telling him Kingpin deserves to die. Maybe not the best way to persuade someone like Spider-Man.

Ok, guess who finished the next bit.

No mistaking that one. I can recall that one panel up there becoming the quintessential Green Goblin in my young mind. That’s how he’s supposed to look. Osborn begins yelling about how Peter should have found a way to save him, and why should he care about Kingpin when he didn’t care about Osborn, as he flies them right at a skyscraper. Spidey leaps away, and then Goblin vanishes. He begins to wonder if a villain is doing this to him, or if he’s going crazy, right as “the grandaddy of all migraines” begins to take hold of him. Mephisto sees this and thinks Spidey is already losing, and prepares to cheat.

Hey, fake Peter’s parents, he finished undergrad. Come on. They turn into flaming demons and pelt him with fire as he wakes up screaming. Then he stumbles into the bathroom and finds his face covered in boils! He’s really falling apart, and resolves to go see a doctor, but he’s become so weak. Mephisto continues to scheme, but we pull back to see one of his demons planning to betray him. Better to let The Beyonder wipe out existence than be tormented forever. And the Kingpin has his car brought around, ready for dinner. Meanwhile, Peter’s made it down to the street, but he’s so weak he can’t go on. Until a friendly cop helps him into his car to “take him where he belongs.” And that cop is George Stacy.

Romita keeps tagging in for all the shots of classic dead people, it’s kinda funny. Back in Hell, The Beyonder is starting to feel bad about all this, watching Peter suffer. Mephisto thinks he’s secretly been gathering his power to channel into Peter at the right moment, which will help him defeat Zarathos, but also kill him, when, back on Earth, Peter is confronted by a hooded monster who clearly knows he’s Spider-Man and begins shooting fire at him. As he dodges, he throws away his regular clothes, getting into his fightin’ gear. The demon asks why he keeps trying when no one cares about him, and he’s getting to our hero, but not enough to keep him from fighting back. And meanwhile, The Kingpin heads down to his car.

I mean, that’s pretty good stuff. Spider-Man appears in the nick of time and kicks the gunman down as he fires his shot wild. Everyone on the street below leaps into action, all secretly part of his security. Arranger asks him why he insists on keeping this dinner meeting, and he says if people are going to try to kill him, he prefers to schedule it, which is… pretty funny considering none of his security actually helped. Spider-Man has no time to consider the issue, as cops burst onto the roof. They stake out Kingpin’s little dinner date and heard the shot. Spider-Man swings away, wondering if he’ll ever understand what happened tonight, and thinking he needs to reassess his values. But first, he’s gotta go drop off his film.

And there you have it. Spider-Man’s moral character and strength of will literally save all of reality, and no one, including him, will even know it. That was some heavy stuff to lay on my elementary school brain, and really cemented Spider-Man’s nobility in my head. He’s the best. As for The Beyonder, I don’t actually know what happened to him. I’ve not actually read Secret Wars II. Maybe I should someday, despite its bad reputation. While the DeFalco/Frenz run started extremely strong, after ASM 261, things really started to go downhill, a trend that will continue. But this issue is excellent.