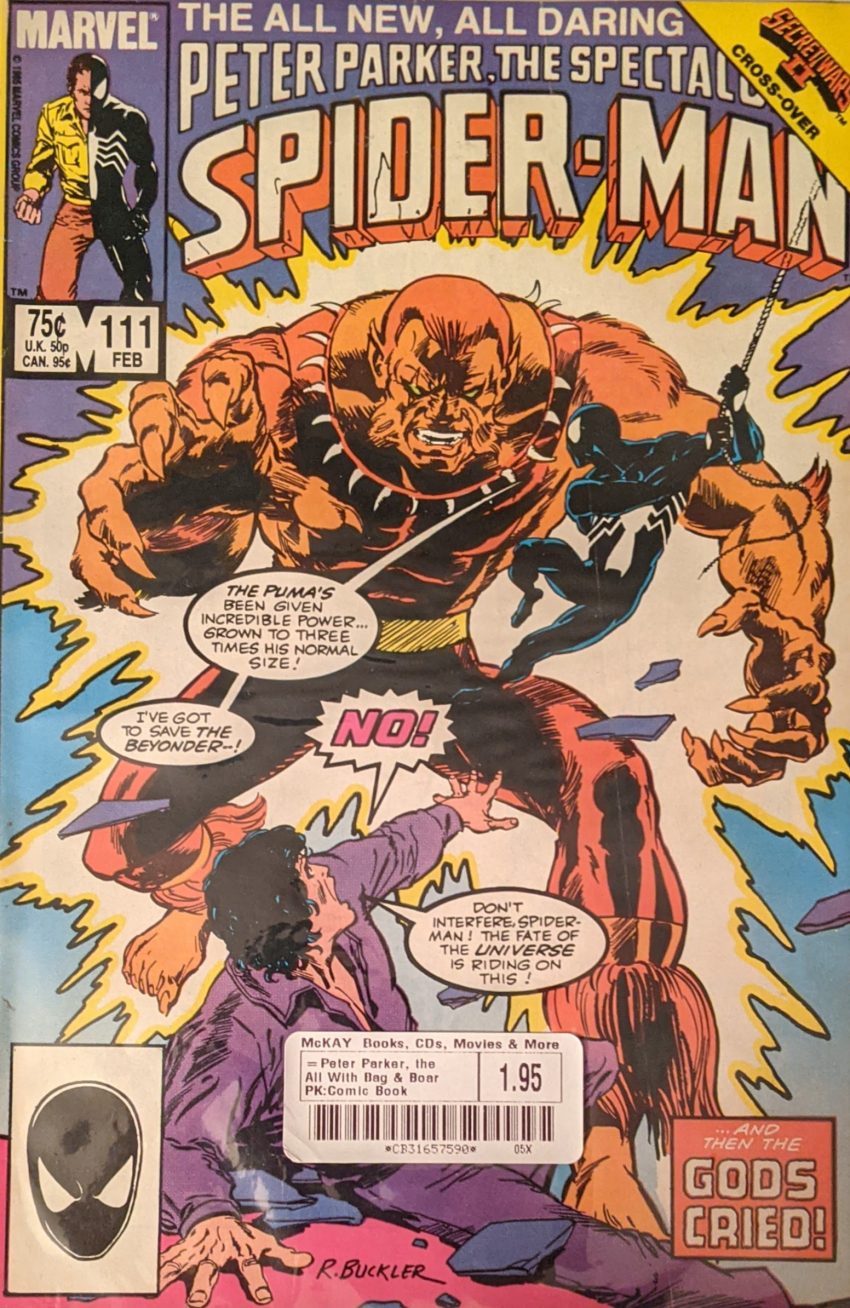 The extreme Mark-Bagley-ness of that Puma figure makes the “R. Buckler” signature a twist ending no matter how many times I see this cover. It’s kind of uncanny. This one seems like a rush job, with current Spider-Editor Jim Owsley (aka Christopher Priest) stepping in to write, with just layouts by Rich Buckler, inks from “M. Hands,” and colors by Nel Yomtov. As we begin, Puma’s still in Japan. He recaps last issue as he leaves town for a remote area, and, because it’s 1982, fights some ninjas.

That is a very Priest gag. Puma explains his situation as best he can, and then…

The Beyonder is literally everywhere during Secret Wars II. Beyonder kinda recaps his deal, how he first became aware of our universe, dragged various heroes and villains to him to play a game in Secret Wars, and has since decided to come to Earth and learn about humanity, and had many adventures already since he’s in like every comic. He tells Puma he’s decided his role is to help others find fulfillment, and that he should be using his powers to help his tribe instead of trying to kill The Beyonder. He even tells Puma his passport has arrived at the Tokyo office. Puma says he’ll leave, but only to find a way to destroy The Beyonder. And he was being so nice, too.

Seems like that was supposed to be “I suggest you wish…” Spider-Man rushes in to stop a van full of jewel thieves, but before he can reach them, they run a red light and sideswipe a station wagon. This sends both vehicles towards pedestrians in opposite directions. Spider-Man webs both and almost pulls himself in half stopping them. But the passenger in the wagon may have died. Then we jump ahead to the end of ASM 273, with Beyonder showing up and asking “What do you what?”

So, The Beyonder’s desire to help others find contentment means he has to let Puma kill him. That’s pretty a pretty unusual turn of events. Which certainly makes it fit into this issue, my goodness. The Beyonder goes to consult with the Marvel personification of death (Which he destroyed in a misguided attempt to help people in an issue of Secret Wars II, but has since restored), wondering what it would be like to die, and if he’s really willing to do it to help Puma find completion. Meanwhile, we learn that that the guy driving the station wagon earlier is named after Marvel editor Ralph Macchio, and that his wife, Maude, died in the altercation. That’s kinda mean to Ralph, guys. Ralph tells a news crew he blames The Beyonder’s cult, saying they were only in town because his wife wanted to see them. He says he’ll make The Beyonder pay. Seems unlikely.

Peter totally does look like a narc, what’s with that suit? It looks like it belongs on a much bigger dude. Beyonder is at the club, watching “Old Master And The Chanters” play their first gig, as Peter Parker shows up, still looking awful and not behind allowed in until Joy turns up and says he’s with her. And right behind them comes Puma, in full kitty mode. Beyonder senses his arrival.

Puma confronts The Beyonder, saying Muramoto would be alive if Beyonder had left him in Tokyo (Technically true), and he’s now more sure than ever of what he must do. While Peter’s webbing his clothes to an alley wall, a blast rocks the nightclub. He rushes inside to find Puma is now huge. Beyonder says that once he fit into his life’s role without doubt, “the universe aligned itself around him harmoniously” and this is the outcome. He now actually has the power to kill The Beyonder. And, like anyone suddenly possessed of a ton of cosmic power, he’s gone nuts.

And so, nothing is resolved, because The Beyonder has 2 more issues of Secret Wars II (And basically every other comic) to appear in. This month’s Bullpen Bulletins features Jim Shooter announcing the winners of the Marvel Try-Out Book.

Bags, of course, went to a truly prolific career that continues to this day. Doug Hazelwood also went on to steady work. Robin Riggs actually wound up doing a lot of inking for Marvel UK. And the others… didn’t go anywhere. The book Shooter promises completing the story was never published. If you want to see how it ends, I guess you’ll have to settle for my attempt at it. Come back next time for the best issue of ASM between here and David Michelinie taking over.