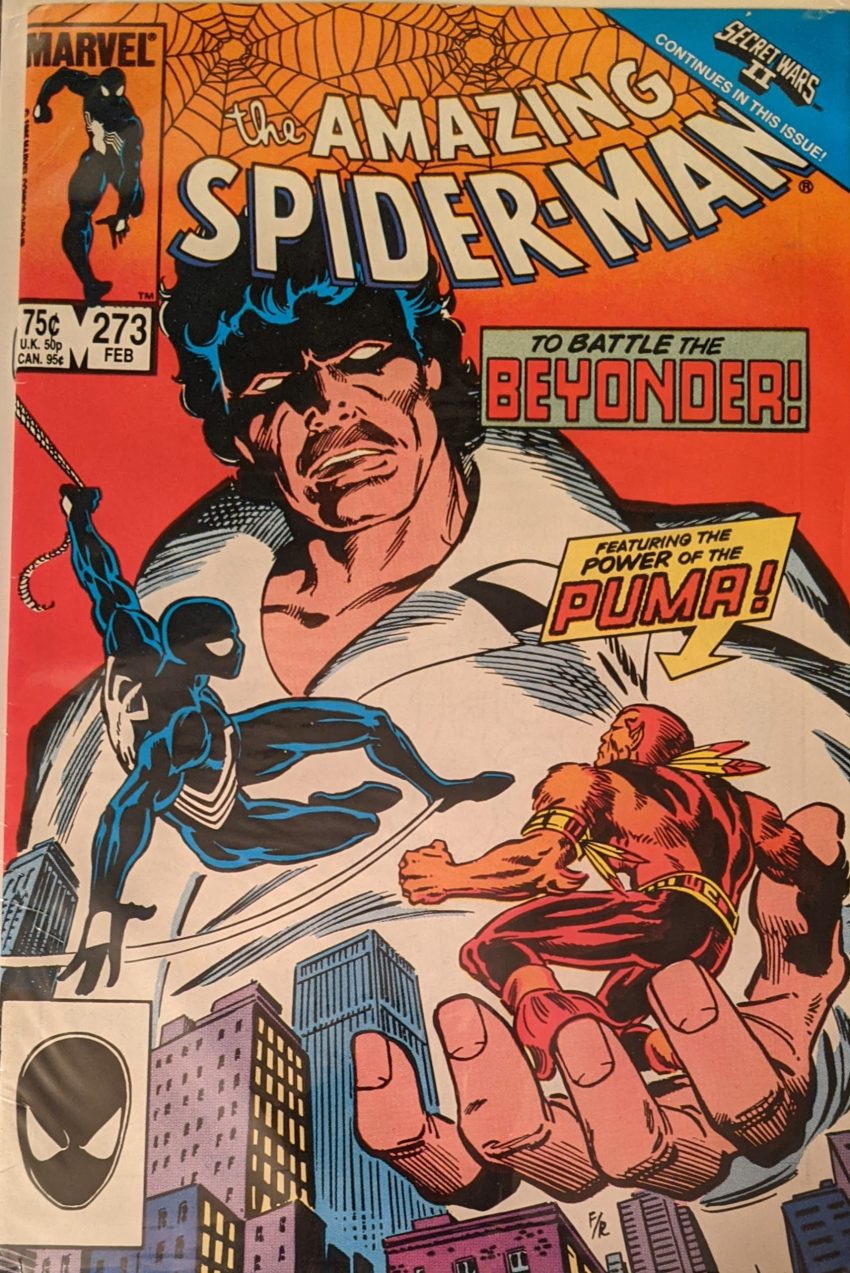 The power of The Puma. Which isn’t much, to be honest, especially in the face of a reality-warping god from space. But, somehow, this is the moment Puma was created for. It’s still DeFalco, Frenz, Rubenstein & Sharen this month, as we start with Thomas Fireheart, aka Puma, back on his ancestral reservation, being shown a vision of He-Who-Comes-From-Beyond.

Woof. The decision to have Fireheart constantly being like “Ugh, these primitives and their stupid rituals and traditions”… about HIS OWN PEOPLE… is wildly uncomfortable. Puma is not a great character, and has aged very, very poorly. I get the feeling DeFalco was trying to do for Native Peoples what Black Panther did for Africans: A smart, powerful and successful figure from a cultural background comics rarely portrayed that way. But Puma is a hired assassin who’s always disparaging his own culture. He sure ain’t no Black Panther. It sucks. Anyway. Puma runs the ritual gauntlet to prove he’s worthy of his station, thinking all this is a stupid waste of time and (at least) that he would be horrified if he accidentally hurt someone during the gauntlet.

“Thomas, you are the only hope of our people.” “Whatever, dummy!” What a cool guys. Also: “You give good gauntlet?” YEESH. The next day, Spider-Man is swinging through the city, thinking he’s still not over the death of Jean DeWolff, when he seems some dudes beating up another dude and intervenes.

Secret Wars II went on for a whopping 9 months. And unlike its predecessor, it happened at the same time as the Marvel line, on Marvel Earth, and must’ve been nearly impossible to coordinate as it wended through most of the Marvel titles. Even subplots from other Marvel comics happened in the main series, like Captain America villain Scourge, a mysterious serial killer who kills super villains, making a hit in one issue of Secret Wars II. As a feat of continuity, it’s pretty impressive. As a story… not so much. Anyway, Spidey makes time to yet again talk about how the gold notebook could solve his money woes but he feels guilty, blah blah blah, and then goes to check in on Nathan in the hospital. Switching clothes, he walks in to see most of Aunt May’s boarding house is there to visit, and May herself, who has been given a button by The Cult of Cosmic Oneness who, as luck would have it, have their leader being interviewed about their message on TV at that moment. The boarders seem to like the cult’s message of unity, but Peter is uncomfortable. Meanwhile, Thomas Fireheart’s jet sets down in New York, and he’s used his company resources to identify the cult as a likely lead on The Beyonder. And he’s not the only one interested in the cult.

Suddenly I find myself wondering when Ned turned blonde. And since when did Peter “never like Ned?” They’ve had their ups and downs, but they got on pretty well during the Conway & Wein eras, for sure. Surprising about of revisionist history in recent posts. Peter finds MJ sitting on his stoop waiting for him. Despite this issue being cover dated February ‘86, a smattering of references with accompanying footnotes are made to Web 11-13 (Feb-April). Obviously, the 3 titles can’t be happening at once, or even in order, all the time, but it’s a bit odd to make several references to 2 comics that aren’t out yet. Anyway, she’s here to help repaint the place after the fire, but as they approach his door, a mild buzz of his Spider Sense makes Peter tense up.

They can paper over it all they want in the dialogue, but Ron Frenz clearly wasn’t made aware Peter’s apartment is supposed to be a burnt out husk when drawing this. While Peter & Thomas get the pleasantries (Such as they would be) out of the way, we cut to Ned & Lance on the street. Ned is making Lance wait before they head out on their assignment so he can catch Betty meeting Flash outside the Bugle. That’s probably not gonna help their marriage. Ned storms off after seeing it, and we’re back to Peter’s apartment, where Fireheart points out that while they’re meeting in their civilian identities, they don’t know each other’s names, so there’s still a strange layer of anonymity. He also reiterates that he’s in NY to kill The Beyonder.

Puma thinks the head of the cult is The Beyonder, and as they arrive at the cult’s base of operations and sneak in, Spider-Man voices his doubts. They move through ventilation ducts following their quarry until he’s alone in his office. Spider-Man still isn’t sure if this guy could be The Beyonder when Puma decides to do his thing.

Even that weirdly specific “Clawed hand raised to kill” gesture is something Frenz lifted from Sal Buscema. Puma tells Foxxe he can’t be the one from beyond, and Foxxe literally says, “Oh, you mean Frank.” Good Ol’ Frank From Beyond. Foxxe gives Puma the address of Frank’s penthouse. Spider-Man chooses then to cut out. He says he can’t be party to murder, and he’ll wait til The Beyonder makes the first move before doing anything about him. So, Puma heads off on his own.

Pretty funny. Fireheart goes to his local corporate headquarters and arranges a ride home. A week later, we find Pete & MJ finishing up his apartment. MJ says he never did tell her about that guy who showed up here last week.

Also pretty funny. When I initially read this issue, I had no idea it continued into Spectacular, so I was stuck on this cliffhanger for awhile. This time, tho, we’ll see the rest of this story tomorrow.