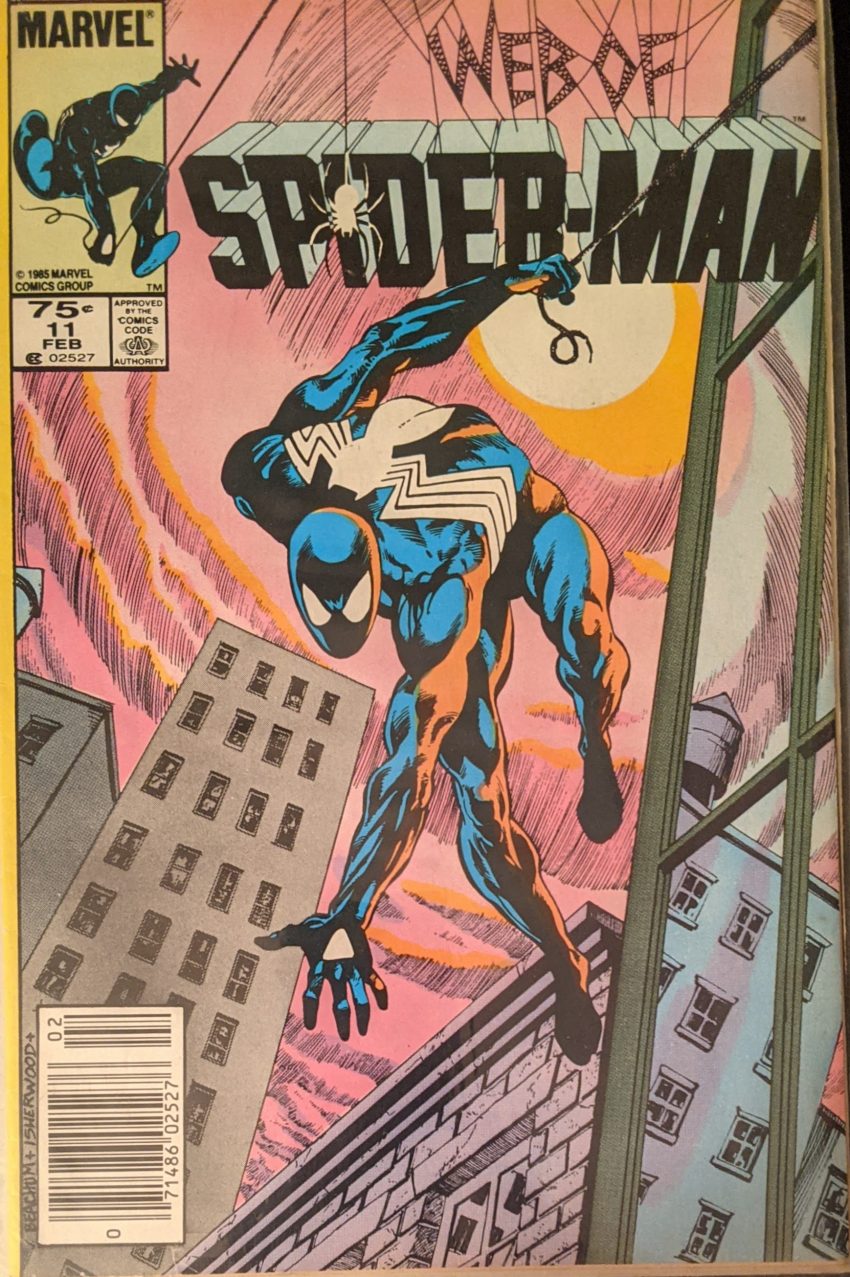 That’s a striking cover. Some bold choices by the uncredited colorist. My copy of this issue had some problems in the printing process, with the spine and all pages misaligned. We’ll see if it actually affects any live area. This month, Bill Mantlo scripts from a plot by Danny Fingroth, the always welcome Bob McLeod pencils & inks, and Bob Sharen colors. It’s Bob time. Spider-Man is swinging on his way when…

He swings off, with the cops and the people he saved arguing about whether he’s a hero. But whatever he is, he’s just ruined a bunch of library books about ethics in the fight. He borrowed them because of his dumb gold notebook, and now he’s gonna have to buy them. Soon, he’s at a laundromat, because even superheroes do laundry. But in the front of the store, a young woman working there is about to be assaulted by some goons in off the street.

Not a bad idea. The owner and a bunch of people from the neighborhood see the goons fleeing and come in to praise Peter as a hero. He’s dumb enough to tell them his name as he picks up one of the goons’ abandoned pistol and finds it’s empty. He asks that they leave his name out of the story when reporting it to the cops, but soon, everyone in his neighborhood has heard about the heroism of Peter Parker.

This is a pretty unusual story idea. Robbie tells Kate not to make this story front page news, while she says she may have gained some respect for Peter. As for the man himself, he comes home to find a stink bomb in his house and a note knifed to his pillow that says “You’ll get yours, hero!” Uh-oh! He flees his apartment for the stench and is greeted by a neighbor who recognizes him.

Interesting take on their current situation. I’m not sure it lines up with what’s happening in ASM, tho. Peter tells MJ his story and she suggests he just lay low and they’ll forget about him in a week. He decides to take her advice. Meanwhile, the 3 goons who started all this complain that they’re having trouble shaking people down now due to the “Peter Parker Patrols,” and they want to teach him a lesson. Then they all go to their respective homes. One of them is surprised by his older brother, who left town after getting revenge on a thief who killed their dad, and now works as a hitman for the mob. This is all news to the kid hoodlum, who’s freaked out by it. Another is home getting whipped by his dad for stealing from the neighborhood. But when they all meet up several hours later, none of them admit they have any troubles as they head off to harass Peter some more.

Peter’s reaction gets the attention of his neighbor. When he finds out their “Patrol” didn’t catch the kids, he says they must’ve gotten in through the skylight, and they’ll post a watch there, too. So now they’re going to actively get in the way of his coming and going as Spider-Man, and he’s had enough. But he’s not sure what to do about it, so he goes looking for more advice.

This issue is full of surprises!

It’s kind of wild that Flash isn’t totally off base about Peter in high school. This is really interesting.

Well, that’s not good. They were just gonna fix the place up, too. The 3 kids are running off, admitting to having knocked out some poor lady watching the skylight, when Spider-Man appears. He says he read about them harassing Peter Parker in The Bugle. When they say he’s got nothing on them, he leans into talking about how he’s a vigilante who doesn’t care about the law, and tries to scare them into leaving him alone.

Man, this is a crazy one. This is one of the most unique Spider-Man stories I’ve ever seen. I’m really curious how this will play out next issue.