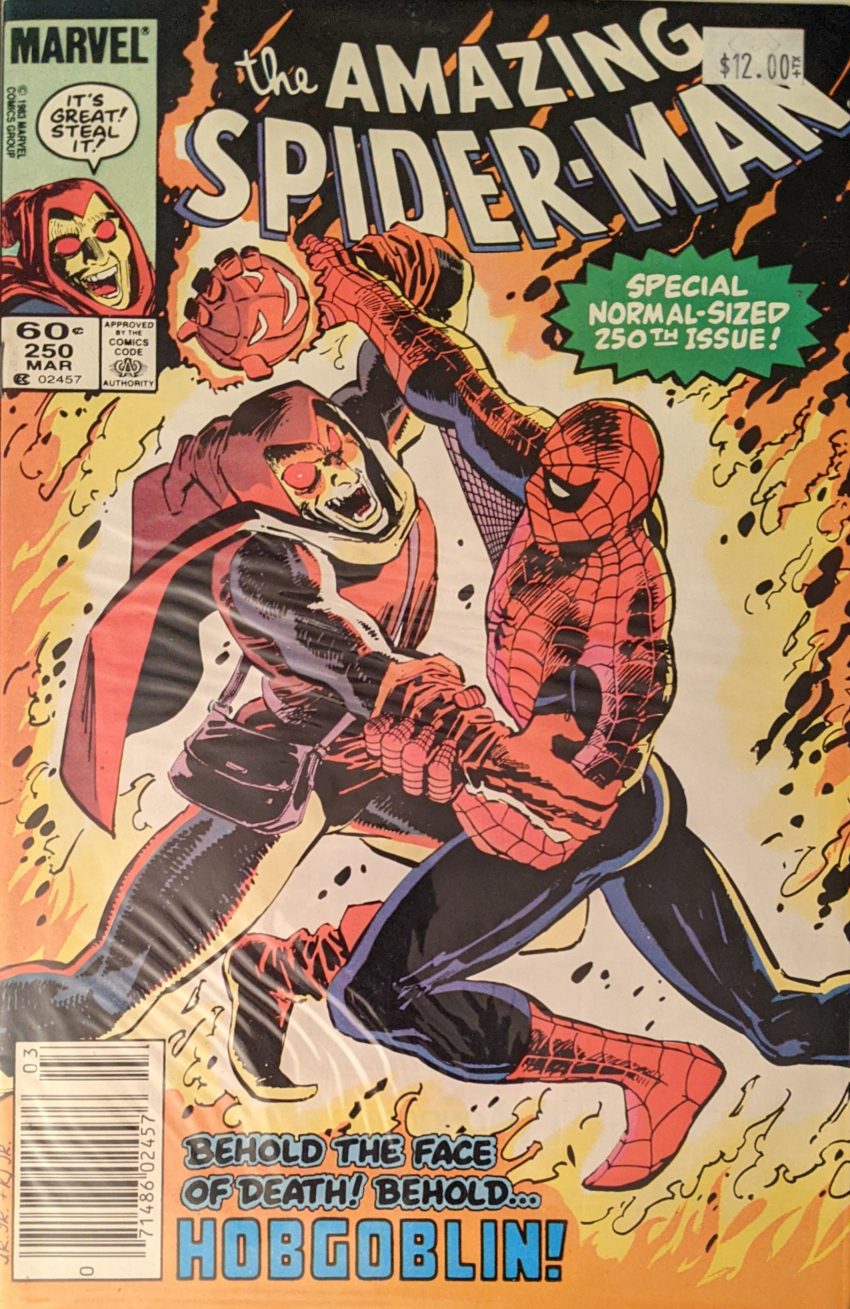 A cover that tells you to steal it is a bold choice. Klaus Janson sure brings something else to JR’s pencils. It’s no wonder they’ve gone on to work together so often in the subsequent decades. Look at this splash:

That inky attack brings such additional depth and power to the page. Christie Scheele back in on colors this month. Kinda wild to think this is the same art team from Spider-Man: The Lost Years, some 11 years later. Spidey leaps up onto the ceiling to avoid being attacked by rich dudes and recaps last issue for us. Spidey notes Harry and JJJ are the only ones not clamoring for his head. JJJ seems ashamed, but Harry is preoccupied, looking for Peter Parker. That’s our man’s cue to get changed and get back in there. As Peter arrives on the scene making a lame excuse about going to the bathroom, JJJ storms out. Peter wonders aloud why he’d leave before the cops arrive, but Harry says they probably won’t be called.

It’s so weird to think Roger Stern’s idea of the guy in the mask here, the person whose voice you should be reading this, is not the person who’s supposed to be under the mask next issue. Meanwhile, at Peter Parker’s apartment, Spider-Man is emerging from the skylight, but without his Spider Sense, he didn’t know his landlady is on the roof beating dust out of her rugs, and barely escapes her notice. He takes off to drop in on one George Vandergill, a member of The Century Club, shown arriving with Roderick Kingsley last issue.

Our mans’ next stop is his old pal Kingsley, who’s pacing the room, thinking he wishes his brother wasn’t out of town, as a lovely paramore tries to get his attention. He calls her by the wrong name, and she storms out right as Spider-Man arrives, demanding anything he knows about The Hobgoblin.

Spidey gets his 2nd huge Spider Sense zap in as many issues, so intense he almost falls to his doom, but then the danger sense goes silent again. He theorizes that Goblin gas “somehow numbs the central nervous system,” that he never lost his danger sense, he just can’t feel it. I mean, when dealing with something as preposterous as a danger sense and a gas that makes it go away, I suppose that’s as good an explanation as any. Having recovered, but still having no idea what’s going on, he proceeds to his last stop, JJJ’s office. He arrives in time to read the beginning of JJJ’s new editorial over his shoulder: “I Created The Scorpion.” Spidey says that must be what Hobby has on him, and that he never knew JJJ paid for the villain’s creation. JJJ says he admits to his mistakes.

As Spider-Man leaves, Jonah gets back to typing his confession. Back at his place, Peter is digging through the closet, looking for something. We already know it’s his old Spider Tracer Tracer from reading MTUs out of order, but where could they have fit in here? The tracker is old and its batteries are corroded. He worries Hobgoblin will destroy the tracer before he can get it working again. But, hours later, we find Hobby examining the still-working tracer, marveling at its design, when the Spider-Signal lights up on it.

I just really wanted to run some essential Romita, Jr. Spider-Man vs. Hobgoblin pages, since it’s the last chance he got to work on them (In this time period, of course). On the last page, JJJ watches the fire from the explosion from his office before handing off his editorial for print. In the letters, such obvious choices as Stilt-Man, Mysterio and DA Blake Tower are tossed out by clearly clueless fans as possible IDs for Hobgoblin. And for at least the 3rd issue in a row, someone guesses Ned Leeds. Seems like people really wanted Ned for it. We’re told next issue is “ENDINGS! A conclusion!” Which is… hilarious.