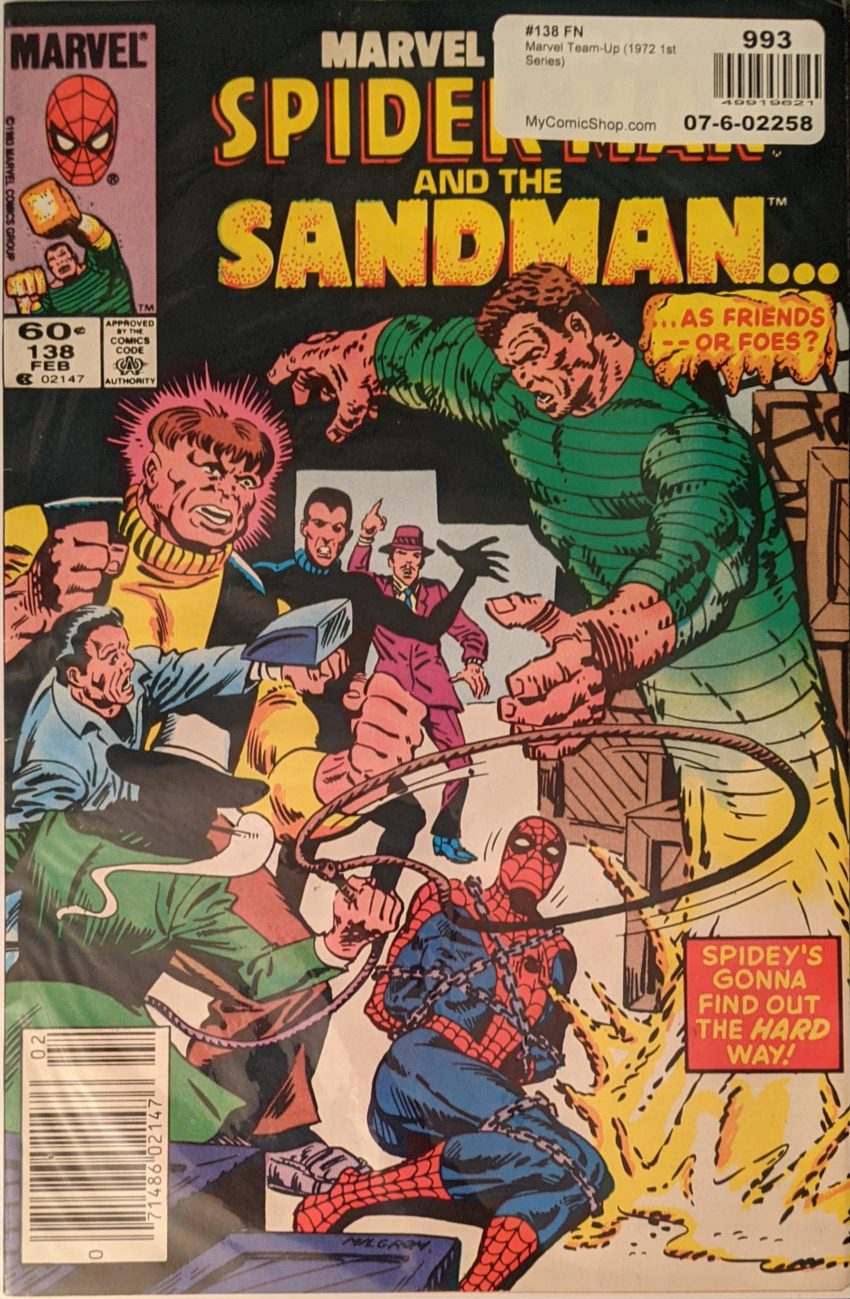 Sandman goin’ legit. Or is he? This should be about the time it happened. Never excited to see The Enforcer. Some concepts are just too silly to me. As a kid reading Ditko/Lee Spider-Man in a paperback-sized collection, I bought Electro’s ridiculous costume, the entire terrible concept of Kraven, anything it threw at me… except the Enforcers. I’m supposed to buy 3 cowboys of various size as a threat to Spider-Man? Because one’s real good at rope tricks? I cannot. At any rate, this month it’s Tom DeFalco writing, Greg LaRocque only providing breakdowns with Mike Esposito finishing, so you know it’s not gonna be too pretty, and good ol’ reliable Bob Sharen coloring. And it begins with Sandman and Spider-Man already in battle…

Someone like Doc Ock is just plain monstrous, but it’s nice to see a superhero comic embrace the idea that some people just need a sympathetic ear to get on the right track. I spent a lot of time during the first DeFalco/Frenz block, age ago, complaining about how the books made no sense. How one book would be on a string of cliffhangers while another would reference something that happened in the middle, despite how it couldn’t have happened at the same time. I didn’t mention it last post, but that’s already started as of the books cover dated February, 1980. ASM 249 begins a 3-issue run with no room for breaks. But both TAC 87 and MTU 138 reference what happened in the cliffhanger ending of ASM 249 (And this despite TAC 87 being a continuation of TAC 86, at that). This attempt to create continuity between the books has the opposite effect. At any rate, we check in on Spider-Man, recapping the events of ASM 249 and TAC 87 as he swings around town, when he happens to web a roof tile that breaks loose, causing him to fall. I think that’s a first, but you’d think it would happen more often. He manages to get another web off, but swings right into the side of a building, beating himself up pretty bad. As he crawls up said building, one guy in the crowd wished he’d have been more badly injured.

Adding some new lames to the mix is not going to make The Enforcers any cooler, sorry. We go from there to the home of The Casadas, who I am surprised to see Sandman about to move in with this early. I don’t think we see them again for like 5 years! Sandman sees their room for rent and takes it. Then he walks to his new job an hour early in good spirits. But not far away, The Enforcers are shaking down another business. On a really crowded page, we see Joe Robertson assign Ned Leeds to look into the messes The Enforcers are making, we see that The Casadas’ youngest son is suspicious of Sandman, and we see that the fake Social Security Number he gave his new boss has a problem, and he’s worried about it. That’s a lot of scenes in one page.

I love how the sliding time scale of comics renders a gap of 20 years “awhile back.” Peter switches to Spider-Man and swings away, thinking Ned’s a good reporter and recapping his origin for no good reason, but he’s noticed by Fancy Dan as he goes, who alerts his fellows that Spider-Man may be on to them. Later, Sandman is horrified by what happened to Mr. Casada, and thinks about how he used to cause such grief as a villain. He swears to stop The Enforcers to make up for his past. Hours later, Spider-Man is swinging back to the area when Montana preposterously lassoes his neck in mid-air way way up and drags him down to Earth. He gets to mixing it up with the newly enlarged roster of The Enforcers.

Seeing Spidey jobbed out to the losers is upsetting. He can beat The Hobgoblin, but he can’t beat a large man and a man with nonsensical metal things on his hands. Ok. How was Ox holding him? Spider-Man can life a bus. Anyway, Sandy sees The Enforcers kicking around the bound and unconscious Spider-Man, surrounded by Kingpin’s goons. They decide to kill him over The Arranger’s protests. Sandman thinks he doesn’t care about Spider-Man and should let them do it, but then thinks “Who am I trying to kid?” and smashes in through the window.

Spidey does the usual for a situation like this and announced he was just playing possum to gather his strength before breaking his chains and getting in on the action, taking out a few of the nameless goons before getting the drop on Montana.

Sandman knocks Ox out from lack of oxygen just as Spidey puts down the remaining goons. Spider-Man expresses his confusion over the help, and Sandman says just because they don’t like each other doesn’t mean they can’t come to an understanding.

Ugh. I’ve been selectively skipping pages this whole issue trying to avoid the references to Spider-Man not having his Spider Sense. Once again, I place the blame for this continuity mess squarely at the feet of Danny Fingroth. Anyway, there it is. This read a lot more like an ASM than a MTU. Pretty good issue except for The Enforcers being the villains. And so begins Sandman’s turn toward the heroic. I will always be salty (Sandy?) about them reversing Sandman’s choice to stop being a villain because he appeared in Spider-Man 3 and they apparently thought he had to be a villain in the comics if he was a villain in the movie. And now that movie is a largely unpleasant distant memory for those who think of it at all and Sandman is still a villain in the comics. Not worth it.