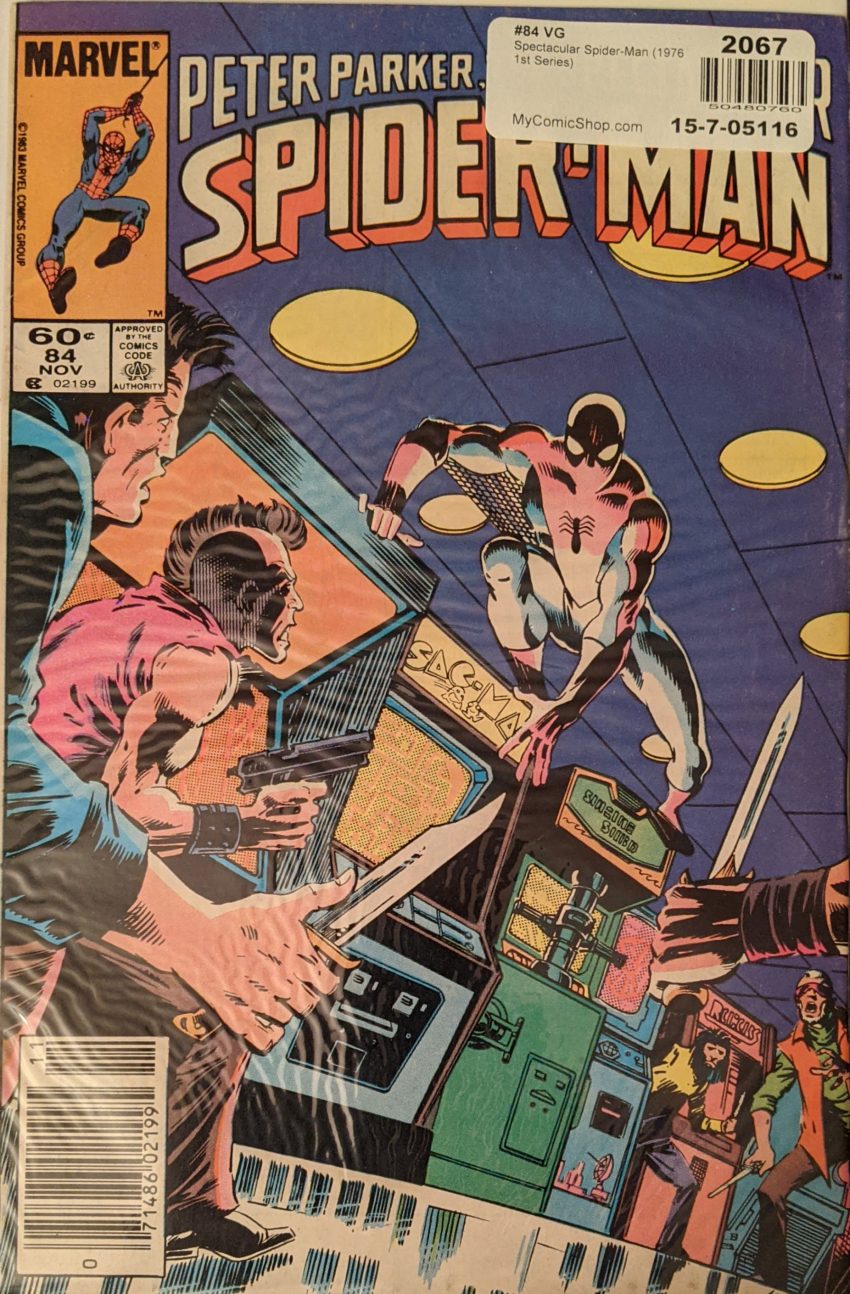 In this issue: SAC-MAN Fever! This issue brought to you by Bill Mantlo, Dave Simons inking his own pencils, Glynis Oliver, and SAC-MAN. This issue has one of the weirdest intros of any I’ve read.

I mean… what? And then there’s this strangely empty splash page…

…and we’re off. Our man swings across the city, brooding about his recent life choices (And also the Punisher’s recent trial) on his way to the hospital where Felicia Hardy is set to be released today. But even that doesn’t seem to be a cheery topic, as he expresses doubts to himself about their relationship. Felicia’s mom is there to see her off, and thanks Spider-Man for saving her life. She says she hopes they’ll be happy together, and Felicia says they certainly will, swinging around the city together. Spidey says when she’s better.

Not exactly bliss, it seems. But that’s sudden, right? Things were going pretty good before Felicia got hurt. At any rate, Spidey swings over to The Bugle and switches to Peter Parker just in time to walk into a scene of pure chaos. Lance Bannon tells him JJJ has gotten wind of a story so big, he’s “secretly” hired a news crew to come tape a TV spot about it. This makes zero sense. This makes negative sense. The story is about Councilman Daly, of course, who is on premises with his aggrieved wife, and as JJJ goes live to the masses, they reveal their child has been kidnapped.

The next page is inexplicable…

What in the world, man. Elsewhere, the lady who stole the baby strolls it up into her building like it’s nothing, and some disreputable looking gentlemen on the stoop have seen the story about the reward and decide to take an interest. Meanwhile, Spider-Man is still cluelessly wandering the city, complaining to himself that he’s a terrible detective and wondering how Daredevil does it. Actually a pretty great bit. Frustrated, he decides to do what any of us would do, and shake down random dudes at a seedy video arcade. Of all places! This seems to be purely because this issue hasn’t had a fight scene yet, and there’s not much of one now, and Spidey dispatches some knife-wielding hoods and is on his way, no closer to saving the kid.  Meanwhile, the 3 guys from the stoop kick their way into Conchita’s apartment and steal the baby, deciding they can ransom it for even more than the reward. And Spider-Man? He’s approached by a little kid who says he’s seen him swinging around looking for the boy, but he won’t give him a lead unless he gets that reward.

(Like that hand down there) Yeah, the lead goon’s name is “Malo.” Come on, Bill. Obviously, Conchita is in a bad place, but just letting her be after she kidnapped a baby is, uh, not a great move, Spider-Man. What’s to stop her from stealing another baby? She needs help! Our man approaches the place she told him the goons are holed up, and one of them screams an alarm, causing them to scatter. Spidey didn’t see who has the kid, so he’s got to hunt them all down. But, I mean, obviously Malo has him, he’s the only one who got a name.

Spidey finds Malo hurt but having protected the kid in the fall, to his credit. There’s like a dozen ways he coulda handled that that didn’t involve possibly killing the child, Spider-Man is not at his best this issue. But he’s not the only one to find them down in the hole, as a bunch of rabid dogs attack. Sure, why not?

Well, I sure hope Conchita doesn’t steal anymore infants, Mr. Power & Responsibility. What a bizarre issue, made all the more bizarre by Simons’ rather offbeat art. And what’s this? Hobgoblin next issue? But he only appears in ASM! Well, he’s gonna make a single exception. This may not have been the most noteworthy month for the Spider-Titles, but it’s a big month for comics in general and Thor in particular as the great Walt Simonson takes over as writer/artist with issue 337. Here begins a 5-year run better than anything before or since in the title except the Kirby days. Essential Marvel comics… but not part of our purview.