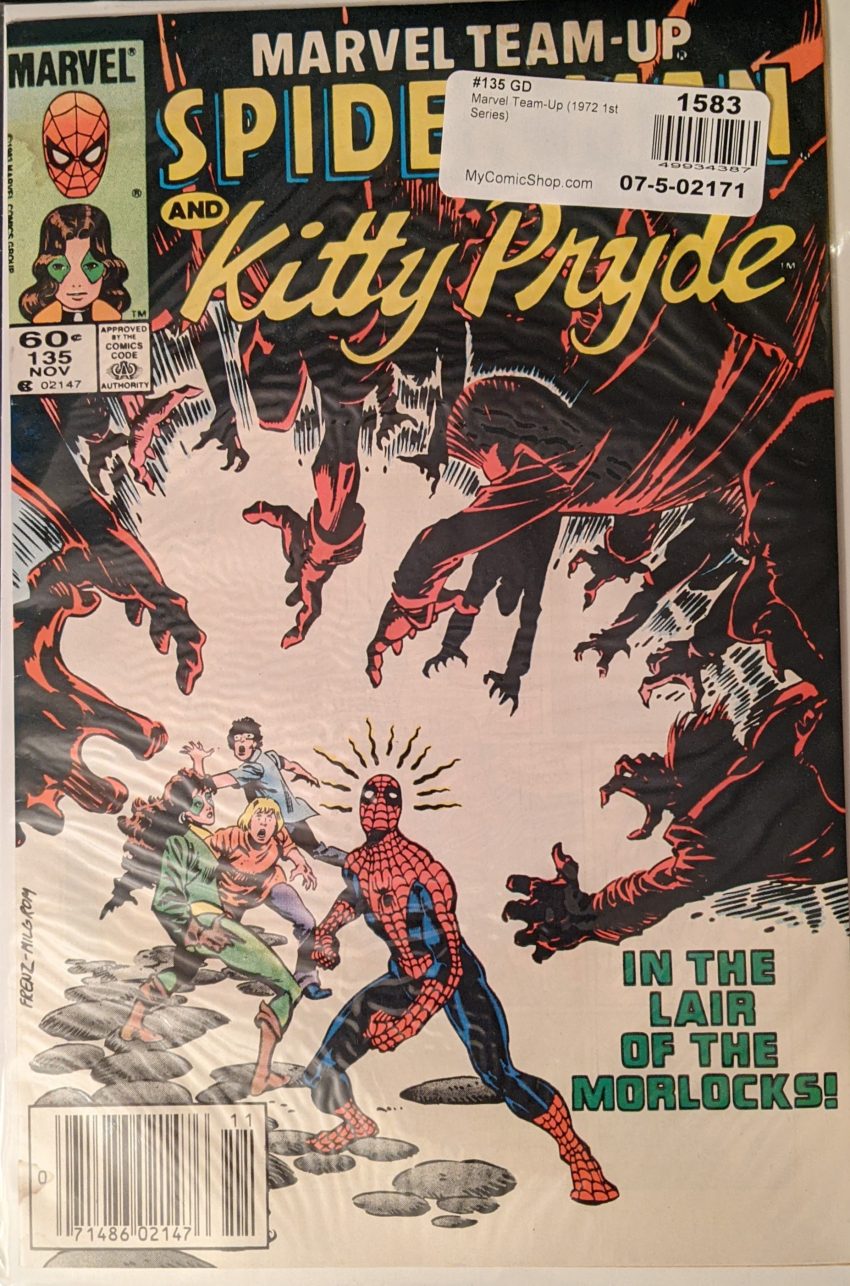 Ya know, I was feeling this during the black costume story, too, but having read just the ASMs of this era several times over the years, having to stop to see what the other books are doing is almost annoying. It’s not really a commentary about the other titles, I just have anticipation to see some of my favorite comics again and I have to wait. But it’s also fun to see what else was going on (And I know something big is coming up in TAC, but I’ve never seen it before, so that’s fun). I guess this is very likely Spider-Man’s first meeting with Kitty Pryde. Decades from this, Brian Michael Bendis did some fun stuff with them in Ultimate Spider-Man. Let’s see how they get along here. Bill Mantlo, Ron Frenz, Mike Esposito & George Roussos at the helm. As the issue begins, Spider-Man is atop a runaway subway car, which he soon learns is not stopping because it’s being robbed.

Why, he’s deciding that his only bargaining chip against Spidey is to drive the training toward another train parked right in front of them? Uh… not seeing how that works. Spider-Man just tosses him away from the controls, but he’s jammed them. So he flips outside and leaps to the other train. As the dead man’s switch begins to stop the first train, he starts trying to get people out of the last car on the other train that’s about to get hit.

And so, our hero’s unconscious form is dragged further underground by The Morlocks, a group of mutants who live in caverns below the city after being shunned by society. Speaking of mutants, our other lead for this month is having an adventure of her own babysitting two bickering kids.

Kitty breaks up the kids’ endless argument and drags them bodily to bed, telling them repeatedly to shut up. But later, as she’s fallen asleep on the couch, the boys attempt to sneak out of the house. They had to “the pit,” allegedly the site of a new home construction that looks more like an impact crater. There’s a big hole in the bottom, and one boy is swallowed up by it, yelling that something is moving in there.

For a blog about Spider-Man, I sure do find myself wondering how people get from Manhattan to Westchester so fast because of the X-Men a lot. The Morlock tunnels really go that far? Oh, ok, turns out they have “magne-cars” that travel super fast. That’s sure news to me. And, I suspect, to Chris Claremont. Kitty catches up in time to see a gang of Morlocks dragging the kid into a “magne-car” and zooming off. So she steals the 2nd car, calling the remaining Morlocks “sleazeballs,” which really doesn’t seem like a word 2 unrelated people would say in the same issue, but I guess they did. As the Morlocks bring Jeff to their new leader, things get goofy.

What? Since when are there humans among the Morlocks? Being outcast for their monstrous mutant appearances is, like, their entire thing, why would they accept humans? Why is that regular dude’s name “STRIGOR?” Bill Mantlo strikes again.

Good guess! Over the course of the next 2 pages, the boys splash water on Spidey’s weird energy shackles, and that causes him such intense pain that he wakes up and breaks free. Rough day for our hero. While the boys catch him up, Kitty arrives at the Morlocks’ home, and soon enough, finds their dungeon or whatever. Just in time for Spider-Man to kick the door off and right through her.

At this point, there are over 900 posts on this blog, so it’s kinda hard to remember, but didn’t we have a story about 2 brothers where the timid one became the hero in the face of danger already? I mean, not that it’s such a unique trope, but… Anyway, Spider-Man knows enough about The X-Men to know they have a phasing teen called Ariel (But how? Would that be so easy to know pre-internet?) and names her as such, while also agreeing to keep it a secret. They start looking for a way out, but then “Stigor” is upon the kids, so Kitty has Spider-Man Fastball Special her toward them, secret identity or not.

Our heroes desperately race out of the collapsing tunnels and are lucky enough to find a ladder, but it’s a long way up, and they just barely make it to safety in time.

There you have it. Kind of nonsensical all the way through, but at least it was an unusual team-up. It’s always nice when it’s not just “Spider-Man and someone else happen upon the same bank robbery” or whatever.