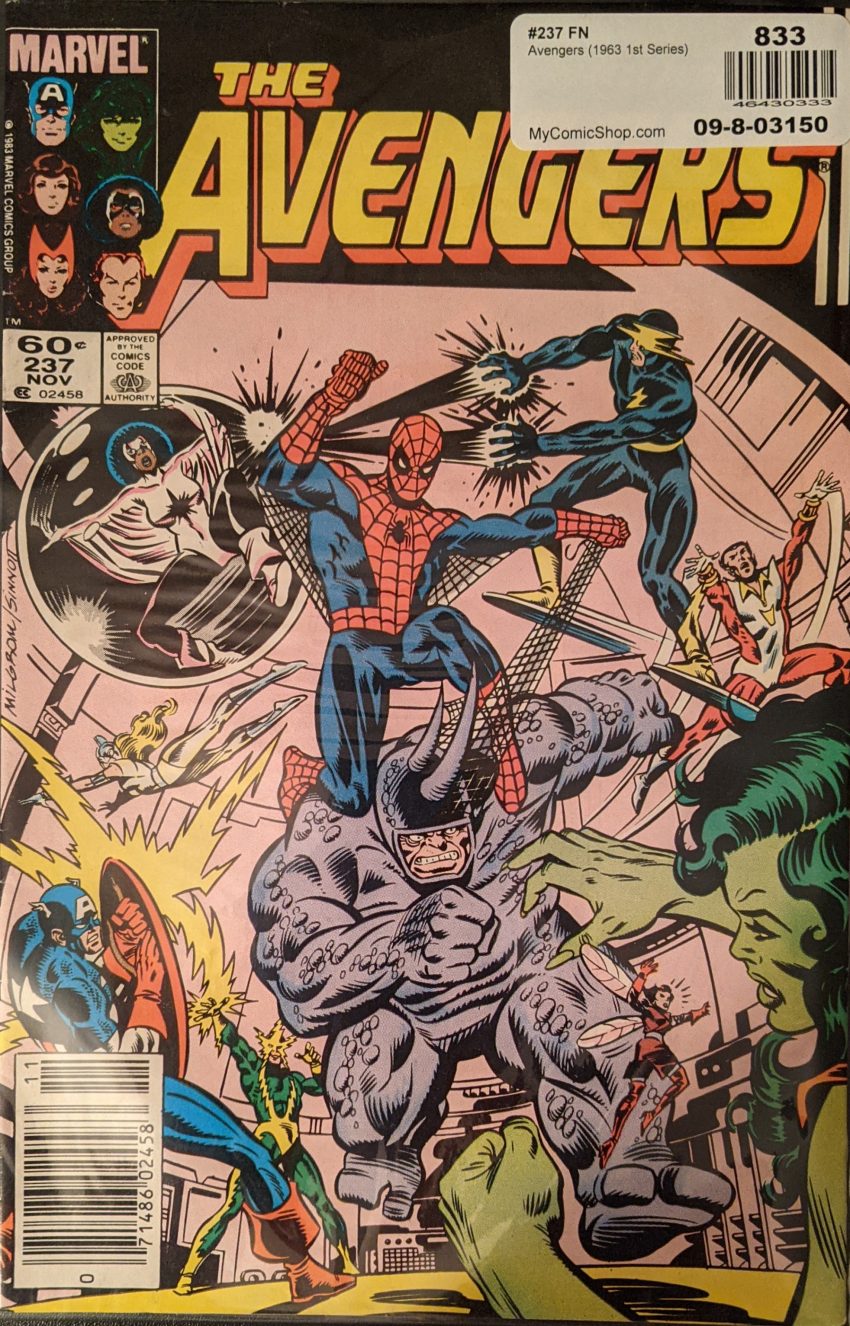 Christie Scheele tags in on colors this month. That is one funny looking Rhino. Not as funny as he looked on the 60s cartoon, but close! This splash is also very funny:

Move along, lava men! I forgot to talk about how weird it is that She-Hulk’s costume included legwarmers at this point. Like, that’s part of her uniform. Cap needs his shield, Jen needs her legwarmers. Did she just have very cold ankles? She’s not too far from exchanging the bathing-suit-and-leg-warmers look for a Fantastic Four uniform at the moment, but she doesn’t know that. Anyway, Spider-Man recaps most of last issue to himself and a lava man, Captain America, and Security Chief O’Brien recap the rest to each other. But little do they know all this recapping is being watched.

Rhino’s “I can’t even beat Spider-Man by himself, and he’s got all this help, but it’s no problem!” position is very optimistic.

Now that’s the kind of gentle continuity clean-up we can look to Roger Stern for. “Hey, this guy doesn’t make any sense, lemme fix him.” Moonstone and Electro break up the fight. Moonstone says they’ve all been imprisoned there so Project Pegasus could study their energy powers (Rhino?), and it’s time they turned the tables. But as she explains her plan, we rejoin the heroes, who’re still watching the lava men head home.

The tone of that discussion sure changed quickly. The Avengers not knowing about Eros’ weird emotional powers is gonna get awkward, for sure. The tube ends up being some kinda gravity well thing that levitates everyone toward their destination… until the power cuts out. Spidey saves the day with a big web net. O’Brien is freaking out, saying that there’s hundreds of failsafes, so this had to have been done on purpose. She-Hulk smashes them a path out of the tube to go find some answers. When they get back to the security center, they learn some villains broke out and are headed for… the nuclear reactor they just saved from the lava men. Spidey comments in his internal monologue about how crazy that is as they race back down there once again.

Moonstone pops up on a monitor to tell them the villains have taken control of the project, and then has Electro, hooked up to the nuclear reactor and mega-powers, electrify the whole wall of dark energy. Everyone turns to The Scarlet Witch to get them through it. Wanda’s hex power alters the wall so that it just melts away, jolting Electro with his own juice in the process, but then Rhino rushes out toward the surprised Avengers as Blackout grabs Captain Marvel in a bubble, like on the cover.

Electro is still juiced up pretty good and looking very dangerous, but then Wanda knocks him out. Cap seems a little worried as he asks what she did, which was make all the carbon dioxide in the room gather around his head so he’d pass out. Are the Avengers already worried about her powers in this era? I don’t actually know, but they should be. spider-Man drives Rhino into the waiting fist of She-Hulk as Monica bursts out of her prison, only for Blackout to turn his power on Starfox. While no one’s looking at her, Moonstone tries to enact her plan, but it turns out The Wasp was looking, actually.

Uh-oh. A nuclear meltdown could ruin anyone’s day. But guess who’s a scientist in the group? Spider-Man says Moonstone has released all the dampening rods. Captain Marvel realizes she can safely get in there to help.

Fun ending. And so, yet again, Spider-Man avoids being an Avenger… for now. He can’t run forever. There was actually a ton of resistance to him joining that team or any team throughout most of his publication history, but sooner or later, it had to happen.