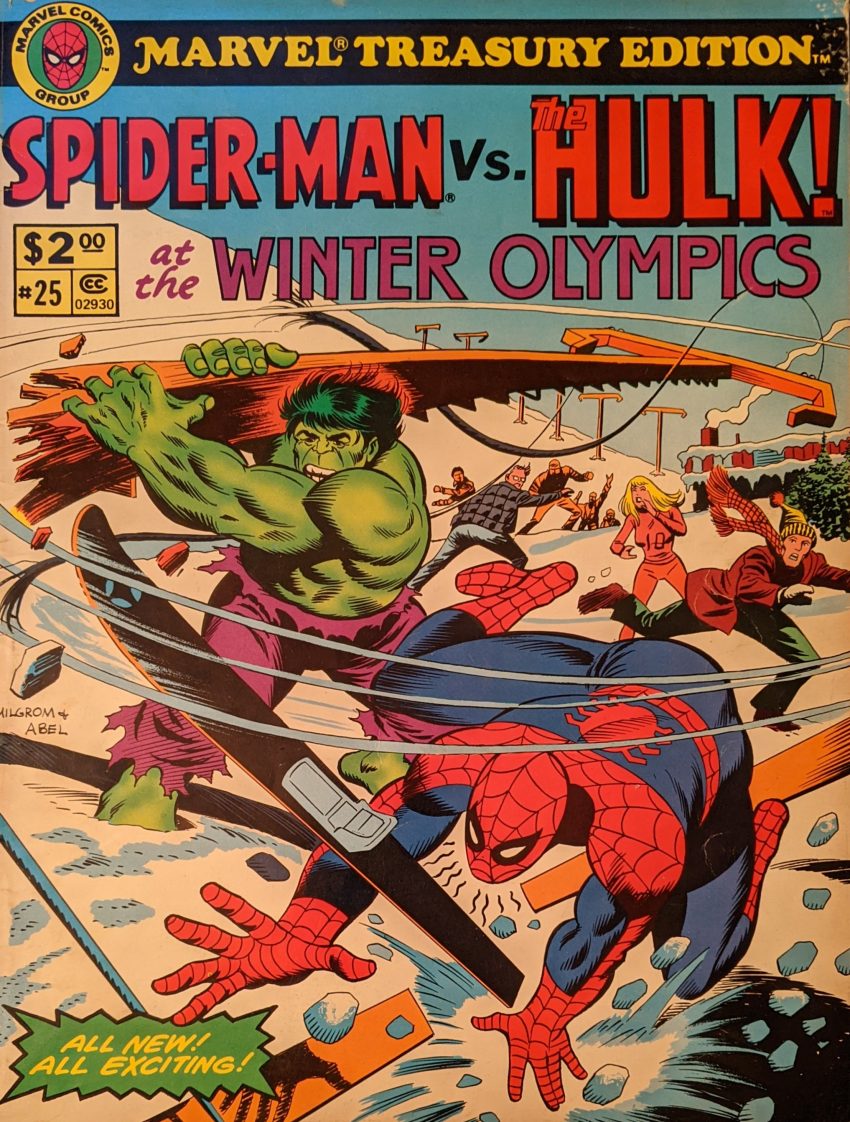 We wrap up this block with the last of the Treasury Editions featuring original Spider-Man content to be covered. This should be a wacky one. We got Bill Mantlo writing from a story by him, Mark Gruenwald & Steven Grant, pencils by Herb Trimpe and inks by Bruce Patterson.

The copy at the top explains what The Olympics is (Thanks, guys!) and then says “two sinister subterranean forces” will threaten the 1980 Winter Olympics in this story. Gotcha. In a 2-page spread to start, we’re told the Olympics are in Lake Placid, and we see 4 hooded subterranena-lookin’ goons making off with (Fictional) skating star Maria Karsov, with Spider-Man in hot pursuit! Not wasting any time in this one, I see.

These are some weird villains. I wonder if a different comics fan would recognize them. They’re new to me. Spidey launches himself up onto the bobsled course and safety, but then “Digger” uses his gigantic clawed hands to destroy some supports and send our hero crashing to Earth. He’s caught by the big one, called “Boulder,” who tries to crush him in a bear hug, but Spidey’s pretty strong, and is able to flip Boulder into Digger. Having beaten them and “Landslide,” all that remains is “Water Witch.” Some great names on these folks. She encases Spidey in an instantly-hardening block of ice, leaving him to watch as the 4 advance on Maria. They say they’re kidnapping her for her own protection, which is a bit of a curve ball, but she can’t speak English, so she’s still terrified. Spidey smashes out of his icy prison to get back into the fight. But as he leaps in, Digger says his interference is allowing the very danger they were trying to prevent to strike.

Well, that was weird. Before anyone can do anything else, guards turn on floodlights, and the 4 subterraneans flee. Spidey is chased by the cops, of course, but he escapes, worrying that all he’s done is make things worse, but thinking maybe Peter Parker can help where Spider-Man didn’t.

What’re the odds that Peter Parker when to school with one of the athletes at these Olympics? The next morning, The Hulk just happens to be passing through when The Lava Men snare him in another giant diamond. For a story with 3 credited writers, this is sure is slight. I don’t know The Lava Men, but I think they’re Hulk villains. And he’s literally just bounding by overhead, like he does, as they emerge from underground. How convenient.

They really should’ve known better. They say their mistress wants Hulk alive as they try another weapon. How could they have possibly known he was coming here!? Their “carbonizer” guns also fail to snare Hulk, tho, and he’s mad now. He flings a huge blanket of snow onto The Lava Men, which is not good news for fire guys, it would seem, and they all turn to flee. In the process, they cause an avalanche, which sweeps them all down the side of the mountain. Real top shelf goons, these guys.

Hulk easily destroys their catapult, and uses the arm as a weapon to swat the fleeing Lava Men. They run back into the cave and disappear. Hulk can’t follow them, so he decides to just wait for them to come back so he can smash them later. But…

Sure, ok. I had to look this one up. Kala is a minor Iron Man villain from the 60s whose fate was increasingly intertwined with The Mole Man over the years. The 4 weirdoes at the top are her team, The Outcasts. But is she not with them in this one, or…? She’s from a splinter civilization that left Atlantis before it sank. Right-o. We cut to the next morning, as Peter’s old pal Brad is competing in his event. Not only is he competing, he sets a new record for the ski jump.

Improbably, Ritterling ties Brad’s newly set record, forcing both of them to jump again. But as Brad comes off the ramp, guess what, he gets encased in a giant crystal. Peter shoves his camera into the hands of his reporter buddy, saying he’s going to go to try to help Brad. Very weird. As Brad’s diamond sinks into the snow, Peter sneaks away and changes clothes. But before he can do anything, he is once again set upon by The Outcasts. This time, they use their powers like a team to take him down, eventually knocking him out.

No way this guy wasn’t gonna show up. So Kala needs The Fountain of Youth, which Moley just happens to have, and thinks the Olympians are gonna help her get it somehow? This plan is ridiculous. It get smore ridiculous, as Mole Man says Kala plans to use the Olympic athletes to counter his Outcasts (WHAT?) using some kind of mind control. I swear I just read the Outcasts worked for her. Anyway, Mole Man says if Spider-Man doesn’t help him repel this invasion, he’ll destroy the whole Olympic Village, so Spidey has no choice. So, Mole Man’s endless army of Moloids and the outcasts go to war against The Lava Men in a big 2-page spread. As the battle rages, both sides send word to their leaders to deploy their secret weapons.

Hulk is a very limited character most of the time, in my opinion, but I do enjoy stuff like this. No matter how hard they work to control him, he just wants a nap. We’ve all been there, big guy. Kala turns to the Olympians, telling them they will fight for her and Brad will lead them. When he refuses, she produces his girlfriend in yet another diamond, and then zaps her with an “age ray” to make her old. So if she doesn’t win The Fountain of Youth, Heather will be old forever. But how does that sway the other athletes, who don’t know her? And why would Kala think Olympic athletes are the perfect soldiers? This is all tremendously stupid.

I haven’t been tried like this in a long time. This is really really dumb. It took 3 people to plot this! The 4 athletes take a page to show off their idiotic powers, looking like the world’s most misguided action figure line, and then they’re off. But then Mole Man appears on a monitor, saying he’s taken her communications station. Sure, why not? He proposes that they settle their fight with a contest of champions: His Outcasts vs. her Olympians, so to spare their respective peoples any more bloodshed. Which is weirdly sort of nice of him. She agrees. She doesn’t know Moley has Spider-Man on deck, MM doesn’t know she has Hulk. And here he comes now, decked out in a suit of armor, looking like a prototype for Thor: Raganarok. And then… And then Mole Man uses his ridiculous earth mover to steal The Olympic Village…

Is this the single stupidest comic I’ve ever covered? I am really leaning that way. My goodness. “Miraculously, no one is killed!” is a pretty funny touch at the bottom, there. Mole Man and Kala teleport in and take their spots at the judges’ booth. They talk a lot about their past interactions before Kala fields her team and Moley sees she has a Hulk. So, he has no recourse…

And now, 46 pages into this nonsense, the battle is joined on yet another 2-page spread.

Even the dialogue is awful in this. For all his faults, Mantlo usually has some fun Spidey quips. Spidey and Hulk fight, the athletes have truly asinine, sports-themed fights with The Outcasts, I am really checking out on this one. Kala keeps trying to cheat and her Olympians keep sabotaging it because they want to win fairly. Ugh.

Spidey messes up and gets caught by Hulk, who says he’s not even mad at anybody and doesn’t know why he’s fighting, but Kala says Spidey has to die, so he has to die. He even says he’s sorry as he begins to crush our hero. Elsehwere, Kala’s cheating helps another athlete win, so she’s in the lead. But as Brad races to outrun the power of Landslide… Heather shows up, free and somehow young again, to show the athletes they don’t have to do this anymore. What? What is going on? Brad wins his race, as if anyone cares anymore, trying to reach Heather before Kala re-zaps her with the old age gun. Spider-Man, meanwhile, kicks loose from Hulk’s bear hug, which also just happens to send Hulk tumbling off a cliff. HOW CONVENIENT. Why were they next to a cliff??

Whatever. Hulk cracked Kala’s helmet, so when her goons dig her out of the snow, she’s old again. She begs Mole Man to let her use The Fountain of Youth even tho her forces lost, and he literally says, “Why not?” WHAT WAS ANY OF THIS ABOUT THEN??? But then Heather recounts that, after she escaped Kala’s guards (How???) she fell into a pool that de-aged her (HOW?????) and then the waters drained into the Earth for no reason, leaving no Fountain of Youth (WWWWWWWHHHYYYYY???). This is terrible, man. This is offensively bad. Kala despairs, but Mole Man offers to let her rule his kingdom beside him, anyway, like he’s always wanted. Shocked that he would still have her even though she’s “old and ugly,” Mole Man says all he wants is a queen, and it doesn’t matter what she looks like, because in Subterranea, it’s too dark to see. I’m about to lose it. They teleport back to his lair, leaving the Olympic Village up on stilts. But Hulk’s free of the mind control now, and when Spider-Man says he doesn’t know how they’ll get down, Hulk starts pounding the ground, which somehow forces the hydraulics to lower the village instead of, you know, shattering it, because this comic is awful.

Well, I’m glad that’s over. This may well be the worst comic I’ve read for this blog. I didn’t have high hopes for a Mantlo/Trimpe joint, but I had no idea I was in for something that would make the 60s Spider-Man cartoon look intellectual by comparison. Woof. On top of all that, the back cover is by rising star and future legend Bill Seinkiewicz. Literally saving the best for the very last.

And on this very sour note, we take our leave of this period. Only one more block from the Marv run in the future. I actually made a late decision to cut this one in half and do the rest later because we’re running out of different periods to visit. A trend that will continue in our next block…