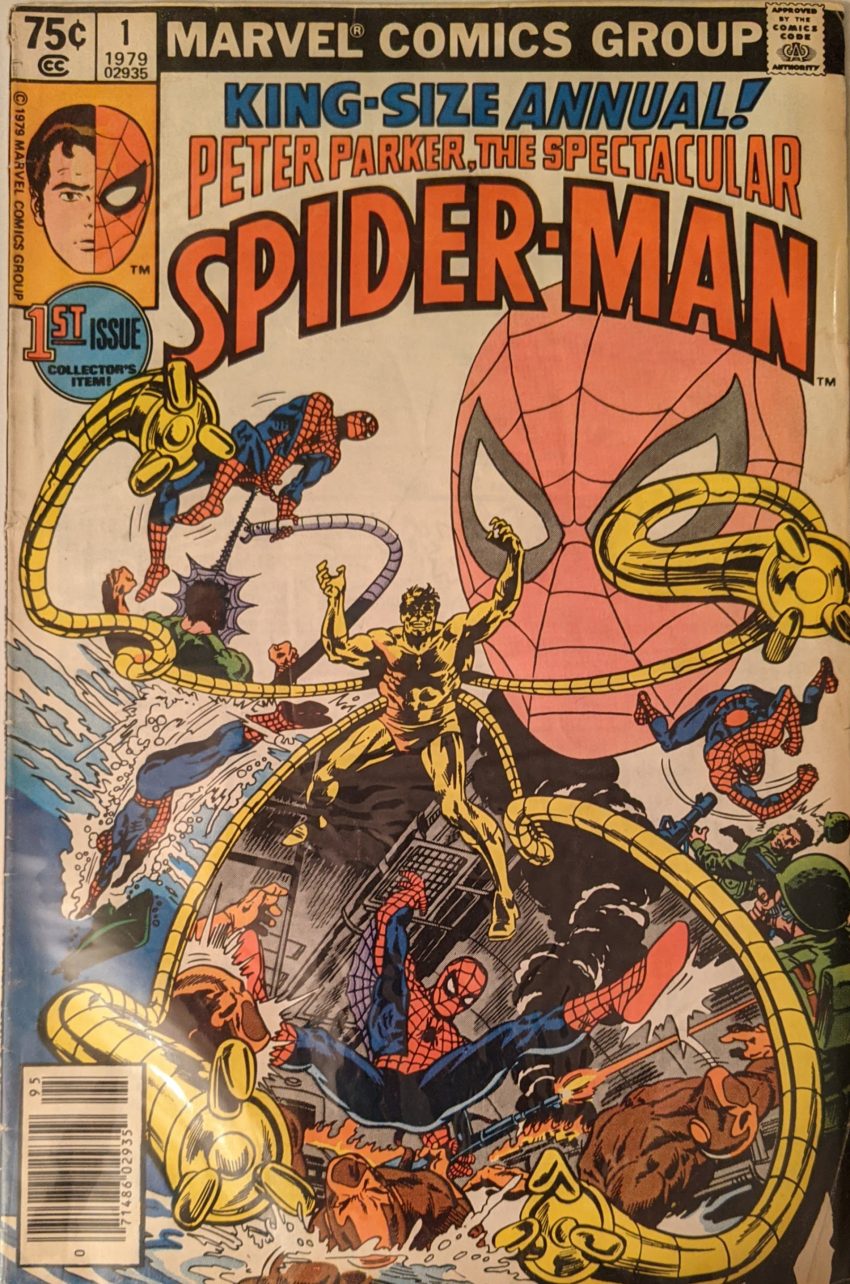 Collector’s Item! So rare and so special that you can get a copy for $3.70 on mycomicshop.com at the time of this writing. Ock being gold on this cover makes an already odd composition much stranger. Bill Mantlo, the late, great Rich Buckler & Jim Mooney are on board to bring us the tale of what Dr. Octopus ran off to in after ASM Annual 13. Mantlo opens with a Lord Byron quote, which seems pretty ambitious.

And what will women call him? Very classic opening splash here. Spidey thinks the wind is blowing with hurricane intensity. It’s so strong the building fascade he’s clinging to begins to collapse! He has to work really hard to keep a ton of bricks from falling on the people below. Along the way, he manages to use his signal belt to get the attention of some cops below so they can move people out of the way, and then he’s able to stop the catastrophe. Most of it.

Day saved, Spidey swings off to the construction site where he fought Doc Ock to retrieve his severed mechanical arm. He hopes he can use it to figure out what Ock was up to. I’m not sure how, but I’m sure we’ll find out. Meanwhile, Ock himself is holed up in his underground hideout, where an “underworld doctor” is telling him all the pain he feels from his lost arm is in his mind. Doc Ock has rarely been a rational guy, and seemed especially unhinged in the previous part of this story, so he doesn’t take that too well.

Alotta krumping in this issue. This is primo Doc Ock, tho. Really ranting and raving. Ock declares he’ll command his severed arm to return to him, and then pull “the crime-coup of the century!” The next day, at ESU, Marcy Kane wants to apologize for calling Peter a coward after the whole Swarm business in TAC 37 (I guess I placed these issues pretty well, as it turns out, despite not knowing when they came out beyond “1979”). Their conversation gets heated pretty quick.

Aunt May’s funeral? So this has to take place between ASM 195 and ASM 200. But… those comics all ended on cliffhangers, so these 2 annuals have to happen DURING them. But it definitely takes place after TAC 37, and it’s simply impossible for that issue to happen during the ASM story. That’s awkward. Editorial should’ve been watching more closely. Here’s my attempt at a No Prize: Peter Parker is a jerk throughout the 70s, and acts like Aunt May’s still dead just to make Marcy feel bad. Do I win? I kinda don’t want to. Anyway, Pete’s checking out Ock’s arm in the science lab when it springs to life and slaps him in the face! That’s what you get! It starts running wild in the lab before smashing out the window and escaping. Pete got a tracer on it before it got away, but he barely has time to think about that because who should have heard the noise but Marcy Kane.

“I can’t come up with a good lie for Peter, let’s just move on.” Awkward. Now Spidey’s out on the trail of the runaway arm. He follows the tracer out into the East River, then stows away on a boat to keep following the signal to an oil tanker.

Spidey suddenly talking like the caption on the front of a comic. Ock seems to have just plugged that arm back in pretty easily. They fight around the tanker while Ock’s goons watch for awhile, Spidey gets in a Popeye reference…

…then Ock gets him down inside the tanker, where he has less room to move, and things don’t go his way. In a brutal battle across many pages, Spidey is battered unconscious and thrown in the river… and then things immediately get, like, eight times sillier:

It’s not even a sphere! Doc Ock and “dolt” is like when you first hear a word you like and you start slipping it into conversations too often, only insulting the people he relies on for his plans to work. As soon as the Doltmobile vanishes beneath the waves, Spidey emerges. Hey, he’s not dead! He’s pretty exhausted, though, and doesn’t really have the strength to fight the current, and is swept away. He’s rescued by a Coast Guard.

Now that’s definitely a swipe from the cover of TAC #5. This sort of thing is something we’ve seen Jim Mooney do several times, but et tu, Rich? “Rescued” might be the wrong word, as only 2 panels later, he’s got a gun in his face.

So, now Spider-Man knows Ock is planning to steal a nuke and rushes off to stop him. He’s in too big a hurry to explain himself to the military on site, so he just webs up everybody.

Bit too meta there, Spidey. The next page has a swipe from the cover of ASM 186! Rich, what’s the deal?? This made me re-examine the previous Spidey action throughout the issue, and I believe there’s more swipes from Gil Kane, Romita and Ditko along the way, though less obvious ones. Man. What’s goin’ on. Ock & his goons make it onto the nuclear submarine and submerge. Spidey latches on and manages to rip open a hatch, so now the sub is taking on water and is going to sink. He battles his way through the flooding corridors…

Getting in his worst and best quips of the issue in the same panel! Now it’s fightin’ time yet again. Spidey eventually realizes there’s no reasoning with Ock, and the sub is really sinking, and he’s gotta get out. He pulls on the arm that got removed earlier, causing Ock so much pain that he recoils for awhile. As Spider-Man begins his retreat, Ock is now actually talking to his arms like pets, having clearly gone crazier than ever. After two more Gil Kane swipes…

Well, that’s it for Otto. We will never see him again, the poor guy. Mmm-hm.  So now Spider-Man just has to explain to the Coast Guard how he was trying to help. I bet he can. The End. Rich Buckler was very good, and also a vet with more than 10 years in the game by this point. I don’t understand all the swiping this issue. Hey, wait a second… Yeah, man, Rich was the one doing all the swiping in TAC Annual 10! SIR! Ten years later and still pulling the same thing! I mean, he made it through his whole short run as penciler of Spectacular during Peter David’s tenure without swiping… I think. I guess I might want to look again… And no one every got around to talking about the ghost cop guy! How did that not resolve?? Will it resolve elsewhere? I guess we’ll see…