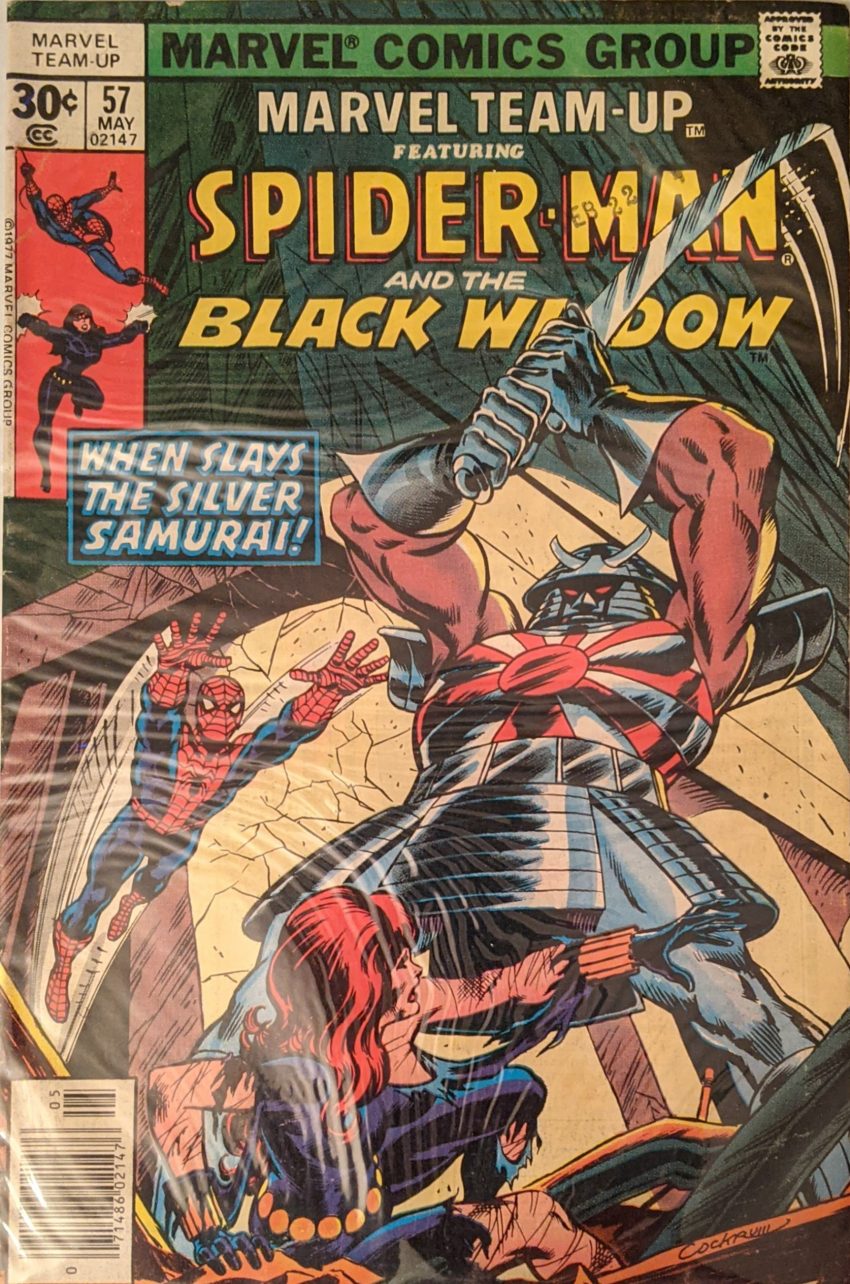 One of the 77. Here we go with some real Chris Claremont action. The Silver Samurai was created to little fanfare in Daredevil 111 by Steve Gerber and Bob Brown. This is his 2nd appearance, and first in a version of his recognizable “classic” look, he looked very different in DD. And eventually, like most things Claremont worked on elsewhere, he wound his way into The X-Men. Sal Buscema and Dave Hunt hang in there on art. Spider-Man’s just swinging around, as he is at the beginning of so many adventures, when…

Dave Hunt is a really nice fit for Sal. This stuff looks really crisp. Spidey handily dispatches all the goons, but his Spider Sense warns him too late of a mysterious figure behind him, who proceeds to beat the crap out of him with a sheathed sword that has some kind of energy field around it.

Very Claremont-y. We flashback just a few moments to the arrival of Black Widow at a SHIELD base in NY. She was called here by an urgent summons from Nick Fury. At this point, Black Widow was a member of The Champions, operating out of California. But she finds the barber shop front for the base deserted, and soon, the whole base the same. So she heads out to try to find Nick.

That DD story sounds prrrrretty gross! Spider-Man gets back into things by kicking The Samurai away from Natasha. SS thinks to himself he’s already got what he wanted, so he cuts through a corner of the nearby building under construction, shaking it so badly a guy falls off the top.

Weird line of thought, man. I wonder when people first started to write Spider-Man knowing he killed Gwen. Was this it? I don’t actually know. The guy he saves said Silver Samurai cut one of “the 4 core pylons” of the building, and it could fall over any minute. I don’t know anything about construction, but that seems kind of unlikely for a skyscraper? At any rate, Spidey takes it seriously, webbing them back down to Black Widow, who’s still fighting The Samurai. She’s shocked when Spider-Man & The other guy just run right past her without helping, not knowing the danger.

Black Widow leaps into frame kicking Samurai away from Spider-Man, just like he did for her earlier. She realizes what’s going on and says she’ll hold Silver Samurai off while Spidey reinforces the building. But SS said he had what he wanted, why doesn’t he just leave? At any rate, Spider-Man gets back to lifting girders, the strain almost too much for him, while BW and SS keep fighting. Spidey just manages to get the building stabilized as Black Widow is running out of gas.

Abrupt ending! We’ve already seen MTU 58 here on the blog, and that little statue didn’t figure into it. Similarly, I doubt it had much to do with the mystery of SHIELD. What a strange issue.