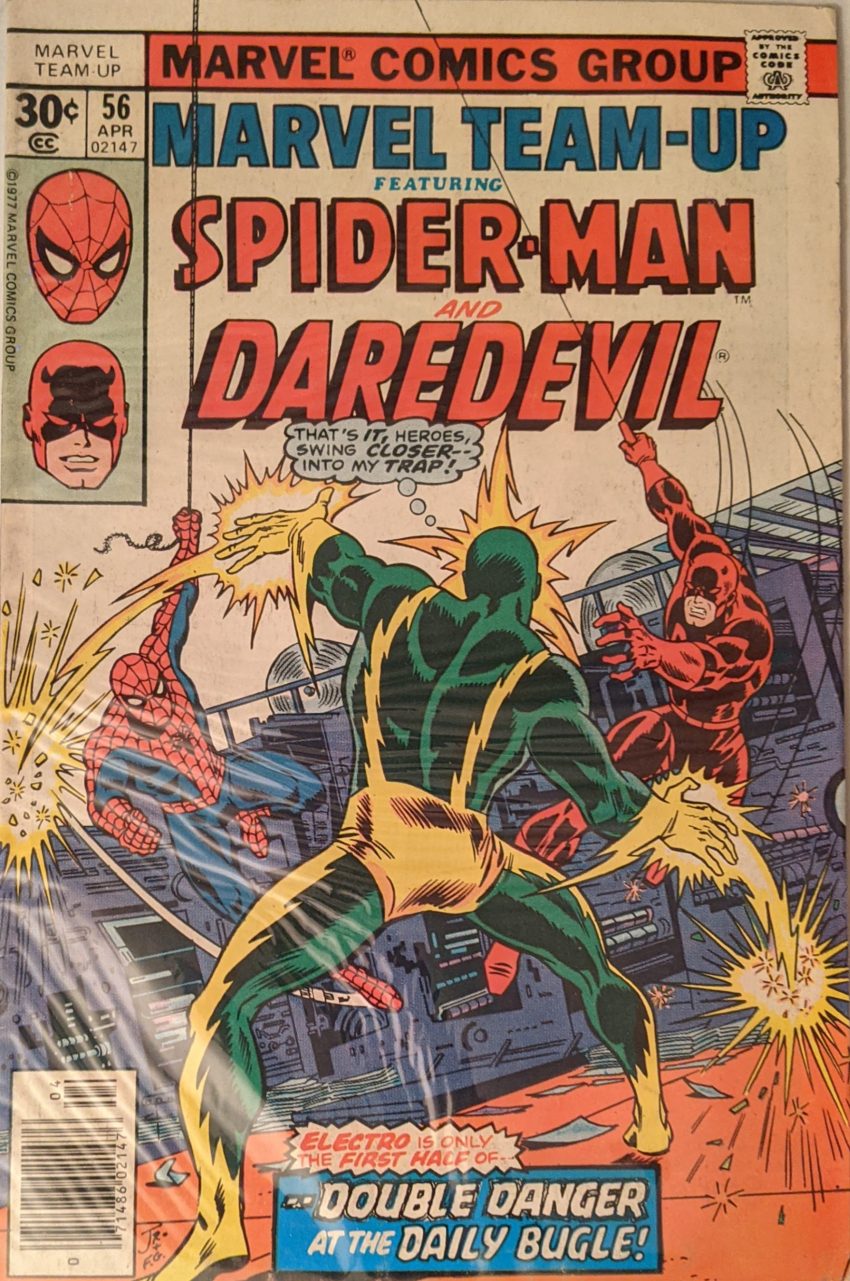 One of 77. I think Electro is kinda underrated as a villain, just because his power is so inherently dangerous, but I also know both of these dudes has beaten him alone multiple times, so… We’ll see how this goes. Despite the letter pages of all 3 Spider-Man titles repeatedly saying Chris Claremont is the new writer of MTU, by this point, it’s still Bill Mantlo, Sal Buscema & Dave Hunt. Which makes sense to me. That cover doesn’t really scream “This is a Claremont story.” A little too meat & potatoes. As things get underway, some ice-themed villain claims to have just stopped the last of the deliveries of The Daily Bugle, so the paper won’t go out today, as Daredevil swings into action. Alright.

Oh, right, Blizzard. I have not seen this costume, I don’t think. Iron Man villain. One of Justin Hammer’s guys, I think. That ice slide sends DD smashing into a frozen fire hydrant, which bursts on impact, giving Blizzard an escape route. DD uses his super sensitive fingertips to read the paper’s headline, which is about a mail strike, wondering why this interests Blizzard so much, and thinking he might know why, and thinks his next stop is…

Electro, of course. Blizzard is there, too, along with still more goons. They seem to be trying to take control of The Bugle, and not only they, they have their goons cart in Barney Bushkin, the boss of The Daily Globe, too. He & JJJ hate each other so much they immediately start screaming at each other, forgetting about the whole supervillain intimidation thing until Electro gets mad. The villains are mad because JJJ put a coded message in the headline of today’s paper. The headline is “Help is on the way, black says, but mail strike continues.” Electro helpfully burns away most of the words to show the left side of the head reads “HELP BLACK MAIL.” That is RIDICULOUS. As Electro rages about JJJ’s utterly insane attempt to get help, we suddenly get an explanation for why Blizzard isn’t in jail, as he tells us he tried on his powerless costume… in prison…?… right as a powerful burst of electricity from Electro escaping the same jail fused its mechanism to him, making him “a living blizzard!” This is a lot of business in a small space. So they teamed up, of course, and now they plan to steal The Bugle’s payroll and collect blackmail money from all the papers in New York indefinitely. This is a terrible plan for so many reasons! And it’s about to get worse as Daredevil smashes through the window.

Actually pretty funny. The heroes chase after the villains, and back in the office, JJJ & Bushkin call a truce until this is all over. Elsewhere, the villains have bumbled into the printing rooms in the basement trying to leave out the front door, because JJJ keeps the lights out in the stairwell to save money. That is both totally stupid and perfectly believable.

This issue is bananas.

I mean, this is silly enough to be a Silver Age DC comic. Electro shoots through Spider-Man’s web, dropping him into a running printing press, but DD senses it happening, and tricks Blizzard into a shooting an ice slide that way and saving him. But, in the process, he’s left himself open to an attack from Blizzard, and is soon in trouble. Spidey does the oldest trick in the book and webs Electro’s eyes, but that winds up making him panic and shoot electricity everywhere, blowing up at least one big printer.

I’m no doctor, but how could Electro possibly be alive after being double-Buscema-punched into the press so hard he bounced off and smashed into a wall, all head first? What an abrupt ending. What a goofy comic book. What an in-character finale for this run of Mantlo on MTU. But he’s not really going anywhere, as we’ve seen he’s soon to take over TAC. But in the meantime, next post, we’ll see Claremont’s MTU debut.