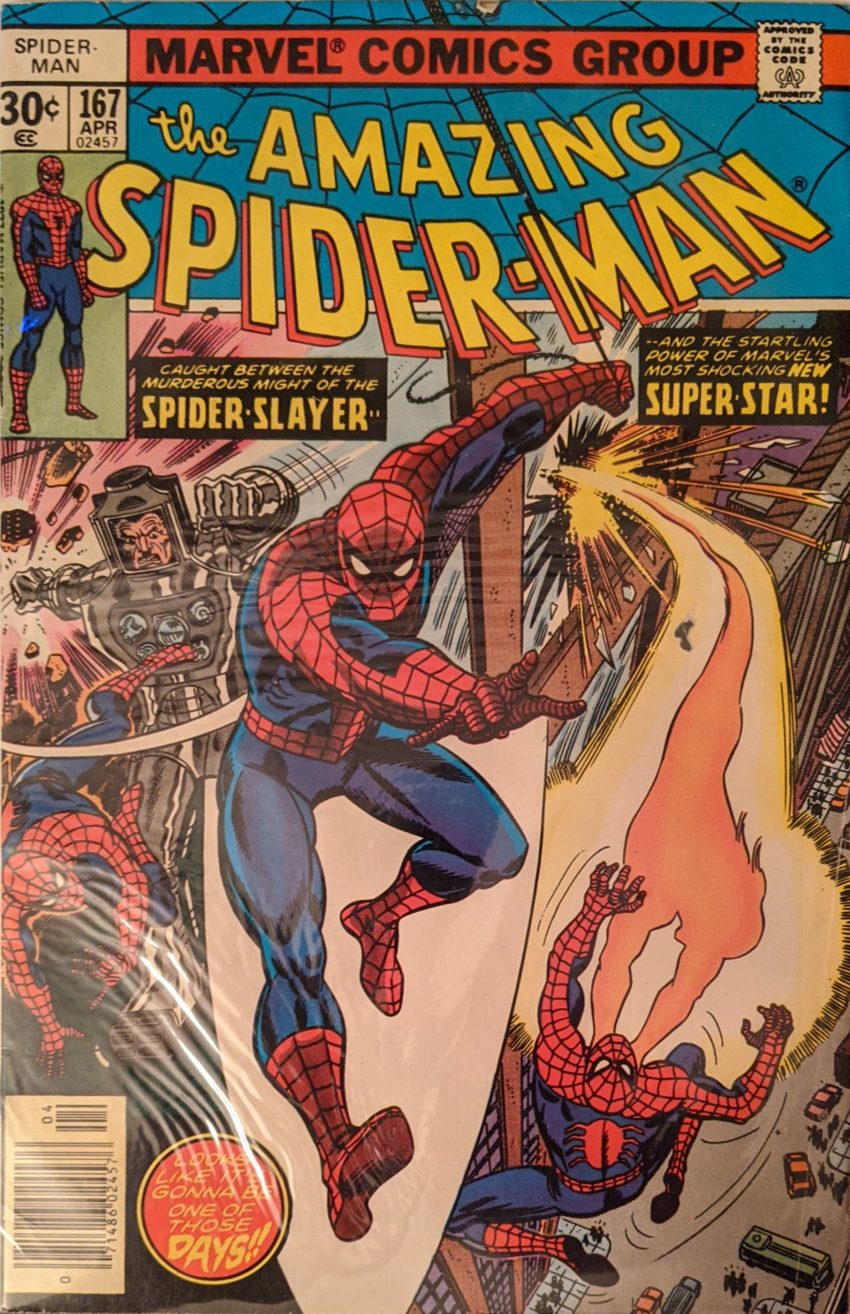 Hey, an actual ASM. Been awhile. Tip top Romita Spideys on this cover. Very, very, very confident blurb on the debut of this issue’s new character. Not… warranted. As we get rolling, JJJ is testing the gear on the new Spider-Slayer. It can shoot an “impulse beam,” cut Spider-Man’s nearly unbreakable web somehow, and do other stuff.

Marla’s handling of JJJ is fun to read, but it’s hard to buy that she’d be onboard with all this. But she is, so here we go. First, tho, we cut to…

Yeah, it’s him. The introduction of the super awkwardly named Will O’ The Wisp. But wait, there’s yet another thing to cut to!

Yeah, the beginning of this subplot. All this jumping around is weird sometimes. Peter thinks about how Aunt May is tougher than he gives her credit for as he & MJ walk off, and even considers maybe telling her he’s Spider-Man when he danger sense alerts him that someone on a nearby rooftop is watching them. He gives MJ an excuse about having a lot on his mind and wanting to take a walk, and after putting her on a bus, decides to see who’s tailing him.

And so the silliness begins. JJJ opens by turning on some blinding lights and crowing about having evidence of “who and what” our hero really is. But when he tries to run into Spidey, he ducks under the robot and escapes as it crashes into a wall. He uses the opening to just swing off, leaving JJJ frustrated. That’s pretty funny. No fight for you. Meanwhile, what’s the rest of the cast up to?

Well, that was a strange thing for Harry’s shrink to do. Blocking traffic and all. Fancy car, too. Weird introduction. Elsewhere, Joe Robertson gets in his car, headed out to look into the story of a glowing ball hijacking trucks in New Jersey when Spider-Man makes himself known in the backseat. He asks of JJJ has been acting strange lately. Robbie says he’s been cackling over the contents of some envelope, but otherwise normal. Robbie is also furious at Spidey for this intrusion, saying to keep out of his private life and get out of his car. Surely can’t fault him for that. But now Spider-Man thinks he’s got a clue to follow up on. Soon, he’s breaking into JJJ’s office and desk, stashing the envelope in his pants just before the night guard comes in. Spidey takes off with JJJ’s evidence, still not having looked at it, when he sees a glowing ball zoom across the sky. Following it, he sees it fly through a wall into a building, and then watches through a window as it turns into a guy.

Spider-Man dives right through Will, who helpfully says he can control his very molecules. Spidey tries to punch him, but that’s no more effective, and then Will knocks him through a window.

That was one busy issue! More going on in 17 pages of story than you’d get in 2 or 3 whole comics these days. How will the coming battle shake out? I guess we’ll see next time.