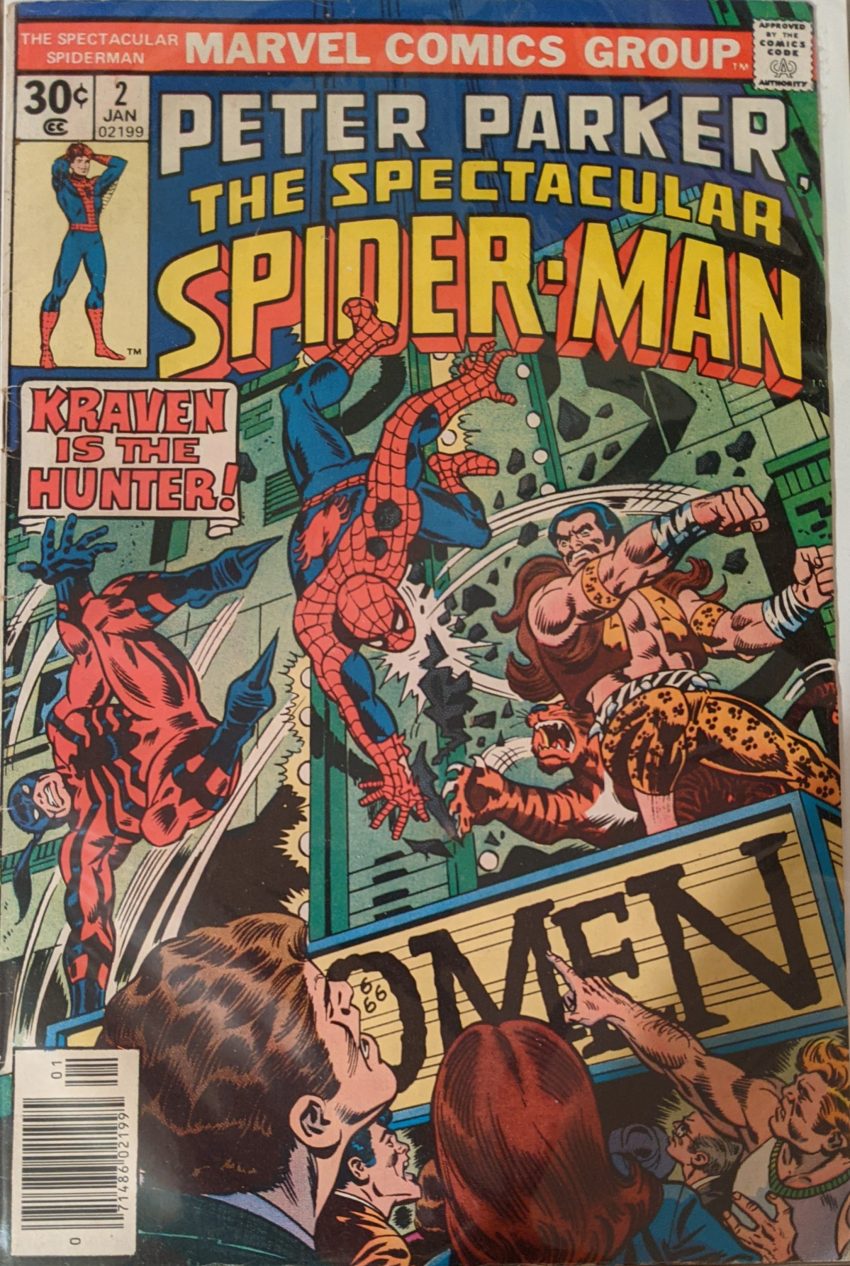 Boy, in the history of comic book covers, this sure is one of them. Not great! Same team with the same credits as last issue. And the complicated continuity continues, as this issue takes place after ASM 164. So TAC 1 & MTU 52 took place on the same day, between pages of ASM 163, then ASM 164 happened, and now we pick up not long after in TAC 2. This is almost too much continuity.

Awfully cavalier about Kingpin’s seeming death, buddy. Spider-Man sees Curt Connors in obvious distress and just tells him he works too hard and leaves, so Curt can wonder if he just needs a good night’s sleep like we don’t all know what that mean. Captions helpfully tell us Curt’s problems will be covered in the next ASM, and then we’re off to a mystery man getting out of a limo walking 2 tigers into a fancy home, where Tarantula attacks him and he is revealed to be Kraven, duh. A voice off panel tells them to stop fighting.

Well, that’s weird. Peter stops in to see Aunt May, have some cookies, think nice things about her, and then leave immediately when Anna Watson walks in and asks if there’s trouble between him & Mary Jane. Classy visit, Pete! Meanwhile, two of the worst Spider-Man villains have reached the office of their quarry. Kraven sics his tigers ona  guard, and then they pump gas into the guy’s office before smashing in a window and catching him in a net. Why’d they need the gas? They escape by walking across a power line, leaving Kraven’s kitties to hold back the authorities, bickering the whole time. What a job. Speaking of jobs…

What… happened here? What’s with that look? This is uncomfortable and I am moving on. Suddenly, Glory Grant has more reason to be around. And now Spider-Man is attacked by Kraven and his tigers. How’d he get them back? Did he just have 2 more waiting? Who knows? Spidey & Kraven haven’t seen each other since ASM 111, at this point. Spidey is inexplicably still tired form his fight with Kingpin a day later, which gives Kraven an unusual advantage, but he’s Kraven, come on. Spidey quickly gets his tigers into his own taps before they get to scrappin’. Kraven soon catches Spider-Man in a bear hug, still mad about the events of ASM 111.

Ranchy’s money explodes into a gas bomb in his hand (Somehow???) and the mystery man enters, saying he knows too much. Meanwhile, Spider-Man & Kraven’s battle has moves into the streets of New york, where passers-by assume it’s some kind of promotional stunt (A real page out of the Stan Lee playbook), and are even betting on the outcome as Kraven once again gets the upper hand, preparing to kill Spidey in a murderous rage.

Another defeat for Kraven. Tarantula betrayed. Who’s the mystery man? I have no idea. But I guess we’ll see… after another couple issues of ASM.