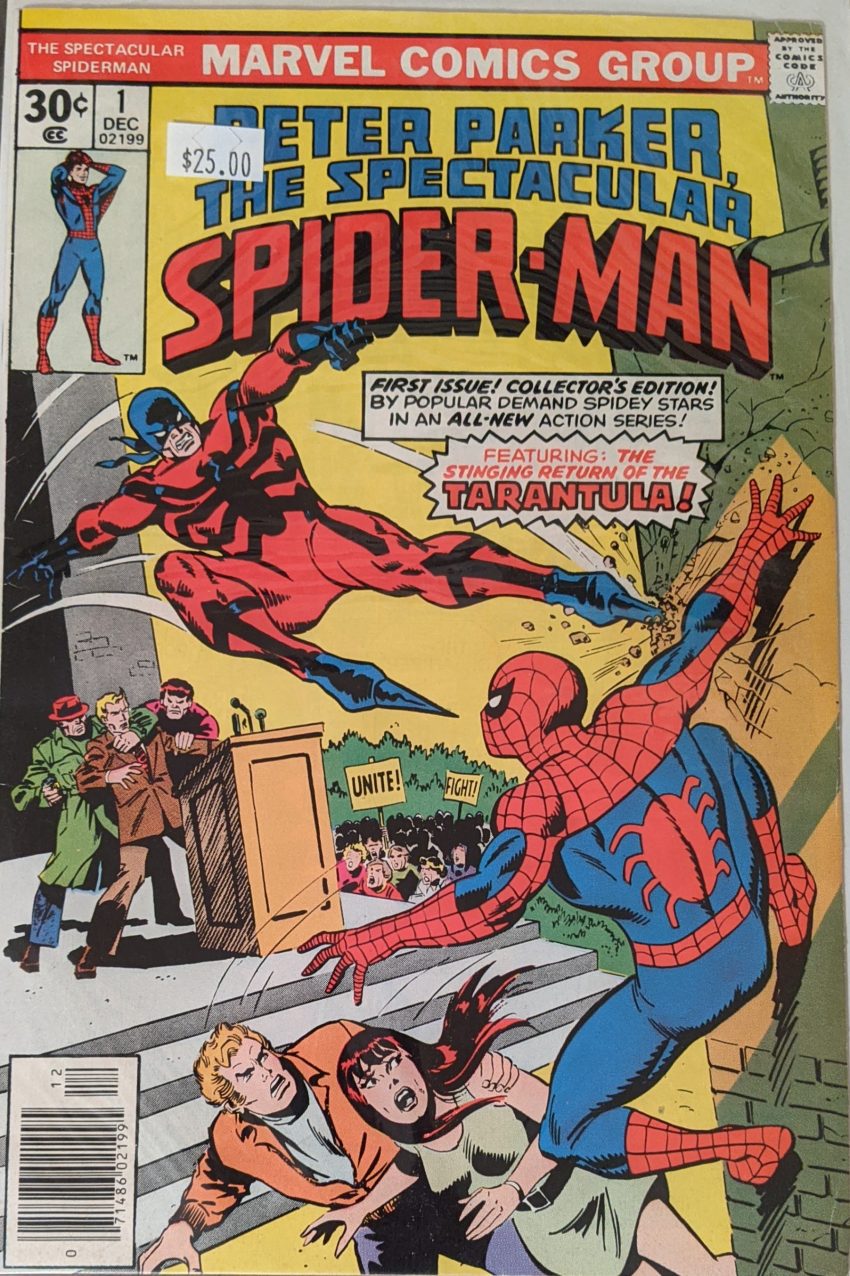 As we have seen before, Tarantula only attacks from the left on a yellow background. The allegedly pulse-pounding first issue of Peter Parker, The Spectacular Spider-Man. What an unwieldy title. People used to shorten it to PPTSM until the “Peter Parker” was dropped, before I started buying comics. I shorten it to TAC. I just always have. But I only recently realized I may be the only person in the world who does so. I believe, as a youth, I saw that the Batman title Detective Comics was frequently shortened to “TEC,” and that inspired me to call Spectacular “TAC.” But… I think I just made that up. It works, tho! So, yer welcome, world. Also, let the record show that, while I no longer remember what I paid for this book, I know it wasn’t $25. Launching the second ever Spider-Man solo title with The Tarantula is… not very exciting. Your hosts are the recent Marvel Team-Up staff of Gerry Conway, Sal Buscema & Mike Esposito. Not an A-list art team, either. Really feels like a transparent cash grab. Spider-Man sells, put him in another book. Conway’s stint at DC must not have lasted very long, as it’s been just over a year since his last ASM. He’s not long for Spectacular, either. Sal is actually credited as Artist/Storyteller and Mike as Inker/Embellisher, which seems to me to indicate Sal came up with enough of the plot to get a credit and did minimal enough pencils for Mike to get his credit. The story begins with Spider-Man setting up his camera above the vice-chancellor of ESU giving a speech. It looks a lot like the situation on the cover. So, inevitably…

It’s Juan and Hildago! Still hangin’ out with Tarantula. Figure those guys would’ve read the writing on the wall by now. Still think they need spider names. By page 3, the last element from the cover is in place, as we see Flash trying to get MJ to safety, and Spidey sees them too, thinking “Flash has been seeing her these last few weeks.” Has he? Hasn’t been totally clear so far. Spidey engages Tarantula, who immediately kicsk his dumb pointy feet into a wall, but he gets loose fast and tries to do more danger kicking.

Uh, MJ knows him too, Flash, she was there the last time you tried to stand up to him and got beat up. Don’t make a hobby out of it. Wait, that’s not Juan & Hidalgo? I guess you could just put 2 more goons in the same outfits, but I highly doubt Flash could tell the difference. Tarantula’s escape on the following page is required viewing:

He just stuck his stupid toes in the car! That shoulda snapped his ankles clean off! But it’s also so funny. His flying kick that inevitably gets his feet stuck in something was actually on purpose for once. To add insult to injury, a mob of students thinks Spider-Man was in on it, despite how it didn’t look like it at all, and want to beat him up. And then he swings up to retrieve his camera and finds “his web snapped” and it fell to the ground and shattered. Like… his web… is super strong? How could it have snapped? He is so mad he throws a little tantrum and smashes up his hands on a brick wall, which… I mean, I’m not a biologist or a doctor or anything, but if he can punch a hole through a wall, lift a bus, and so forth, I’m not sure I think a brick wall could hurt his hands. And yet, this is the 2nd time Conway has had him punch bricks and get hurt.

Peter makes up an excuse to sneak off as Spider-Man, of course. Meanwhile, we learn that a mystery man is pulling Tarantula’s strings, and his next target is the mayor, who he is told to kill, but make it look like a bungled kidnapping. Hey, you want bungling, you came to the right guy, mystery man. As Ranchy and his goons head for the mayor’s office, they find someone else waiting for them.

Spider-Man rips the door off the elevator, solving the problem of Tarantula needlessly shouting he has the only key to it, and runs up the elevator shaft. With his headstart, Tarantula is able to bust into the mayor’s office and begin a big dumb kick before Spidey tackles him in mid-air.

There’s a few more pages of fighting and yelling and whatnot, with Tarantula doing the usual strange mix of way too well and very poorly against Spider-Man depending on the page, until Spidey finally tackles him and the mayor right out the window.

ENEMIGO! Oh my goodness. With that, yet another dopey Tarantula story comes to a close. Not the most exciting launch for a Spider-Man series. For more on that, here’s Gerry Conway with the kind of editorial you’d find in the back of almost any #1 today, but which was pretty uncommon at this time:

Ok, so… if this is meant to be a place for the supporting cast to flourish… why was it 90% Tarantula fightin’? And we’ve certainly seen that this book is not often going to line up with ASM very well, and will also soon enough be getting wrapped up in its own multi-part arcs. Add that to Len Wein’s habit of 3 and 5 and 8 issue arcs without room for another title (This issue not withstanding) and you got a problem. The reasoning doesn’t seem to work.