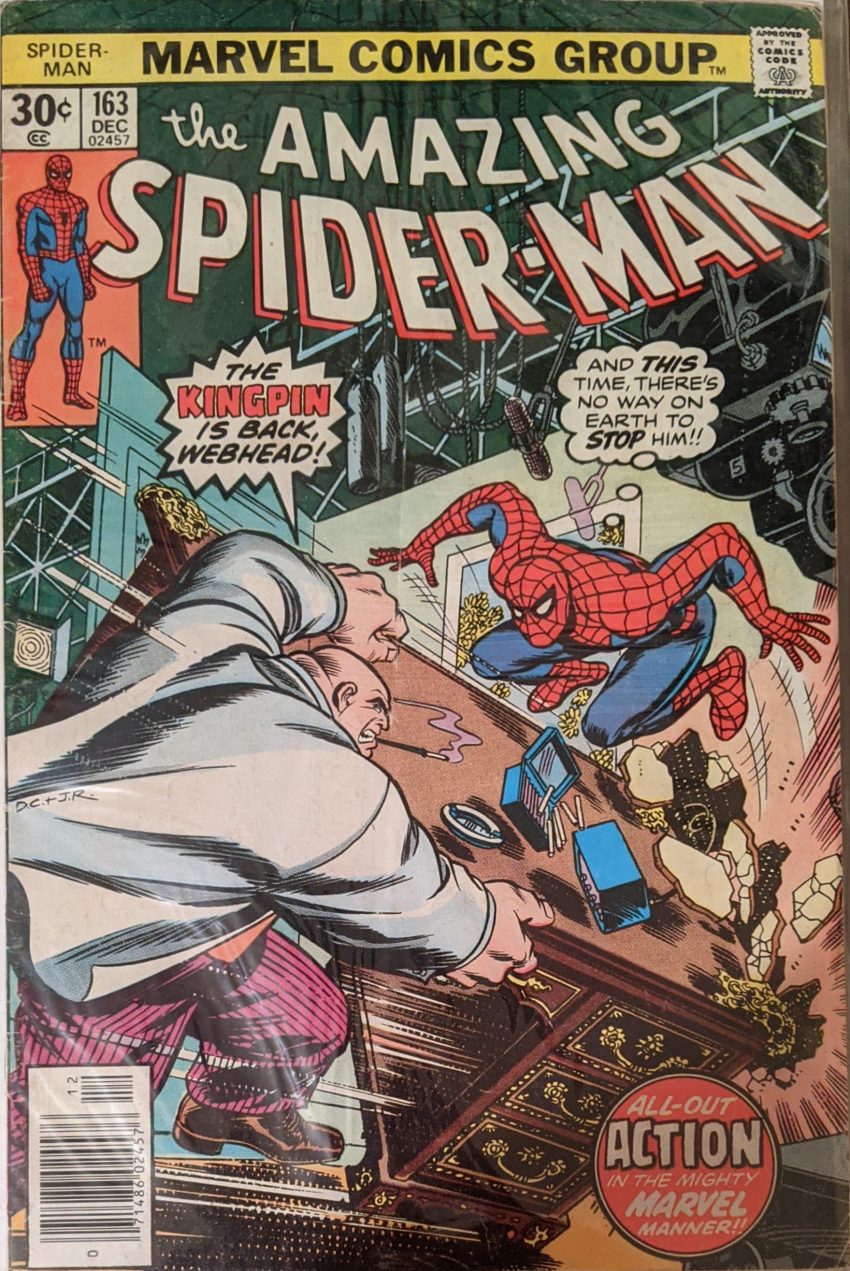 This cover is by Dave Cockrum & John Romita, but it’s hard to see any evidence of Cockrum. Maybe he just laid it out. As this issue begins, I have nothing but questions. Spider-Man is catching a ride on top of a bus. A bus that has taken him somewhere way outside the city, if the scenery is anything to go by. Grass. No tall buildings. No buildings at all. Where is he going? We don’t know, because he sees a weird looking helicopter steal a truck off the road and leaps to investigate.

As Spidey fights the goons, 2 of them grab something or other out of the back of the truck and then signal the goons in the chopper to drop the truck, with Spider-Man still on it. Spidey could easily just jump up onto the chopper given his powers, but I guess that’s not dramatic enough.

Since when does Kingpin employ goons dressed like a rugby team? Why aren’t they just gangsters? And how is Spider-Man what he’s worried about when there was no way for him to know Spider-Man would even be there? The 70s, I guess. Back in Manhattan, back from whatever he was doing out of the city and didn’t tell us about, Peter Parker goes to buy some flowers for MJ to try to patch things up between them. But, she doesn’t answer the door when he goes to see her. Dejected, he trashed the flowers and heads home, only to find an odd assortment of supporting cast members already in his home.

Glory, MJ, Flash, Harry, Liz, Randy Robertson, Joe Robertson, and Peter’s landlady who doesn’t even like him? What about Aunt May? Aunt Anna? If Robbie’s there, why not JJJ? Ned? Betty? Who knows? But now I do know where all the weird junk in Peter’s apartment came from! Always wondered how he got that fish and the CIgar Store Indian. Peter tries to talk to MJ, but Flash is still hovering around her, and it seems like they might be together. Frustrated, Peter retreats to the kitchen, were Robbie tries to give him some of the usual fatherly advice, but he sneaks out onto the roof while Robbie’s getting… something out of the fridge. Looks like a pan of food? Make yourself at home, Robbie!

Oh, right, Betty & Ned are in Paris. Easy to forget when it’s been 2 years since I read the issues preceding this block. Suddenly, the book skips ahead 24 hours, and right past the events of this month’s Spectacular Spider-Man #1! I guess I could do another 2-issue post like in the last Conway block, but I’ll just save it for its own, who really cares? Now it’s the following night, and Spider-Man has ludicrously tracked down the machine he saw stolen. We’re told that, by seeing it for a couple seconds while plummeting to his death, he was able to infer it must require a ton of electricity to power, so as Peter Parker, he went to Con Ed to ask “if anyone has been using an unusual amount of electricity lately.” And that worked! And now he’s going to the address! WHAT?? Insane. This is taking him to an abandoned movie studio. Spidey breaks in, but finds no resistance. As he enters the only room with a light on, a metal door slams down behind him, and The Kingpin is waiting for him. He really is. He says he thought Spider-Man would get here sooner given all the clues he’s left him. Uh… what? His goons stealing stuff haven’t exactly left a trail of breadcrumbs.

Kingpin says only he can activate his cane. Then he calls in all his goons, but tells them not to interfere. Then he rolls up his sleeves and smashes his desk over Spider-Man’s head. Spider-Man had so much time to see this coming and avoid it, and yet did not. Really not so good at the superheroin’ today. Kingy (Still no real name by this point) starts besting the crap out of the dazed Spider-Man, who isn’t able to muster much of a counterattack at first. He finally gets his bearings, tho, and punches Kingpin across the room before they tie up like high school wrestlers.

Love, love, love that Kingpin’s whatever-o-tron can apparently syphon Spider-Man’s lifeforce right through his outfit. That Kingpin didn’t bother to take his mask off. Great stuff. Who’s on the table? We’ll see next time. This issue features a letter from future boss of comics publisher Fantagraphics, Kim Thompson. Kim thinks Doc Ock got a raw deal in his recent return, and thinks he should’ve beaten Spider-Man so they could rename the book The Amazing Doctor Octopus. Or at least, that’s what he says. Editorial says Len Wein intentionally wanted to try to make Doc Ock more sympathetic, but not that sympathetic. Why would you do that? Ock’s ruthlessness is part of what makes him such a great villain. Bad idea.