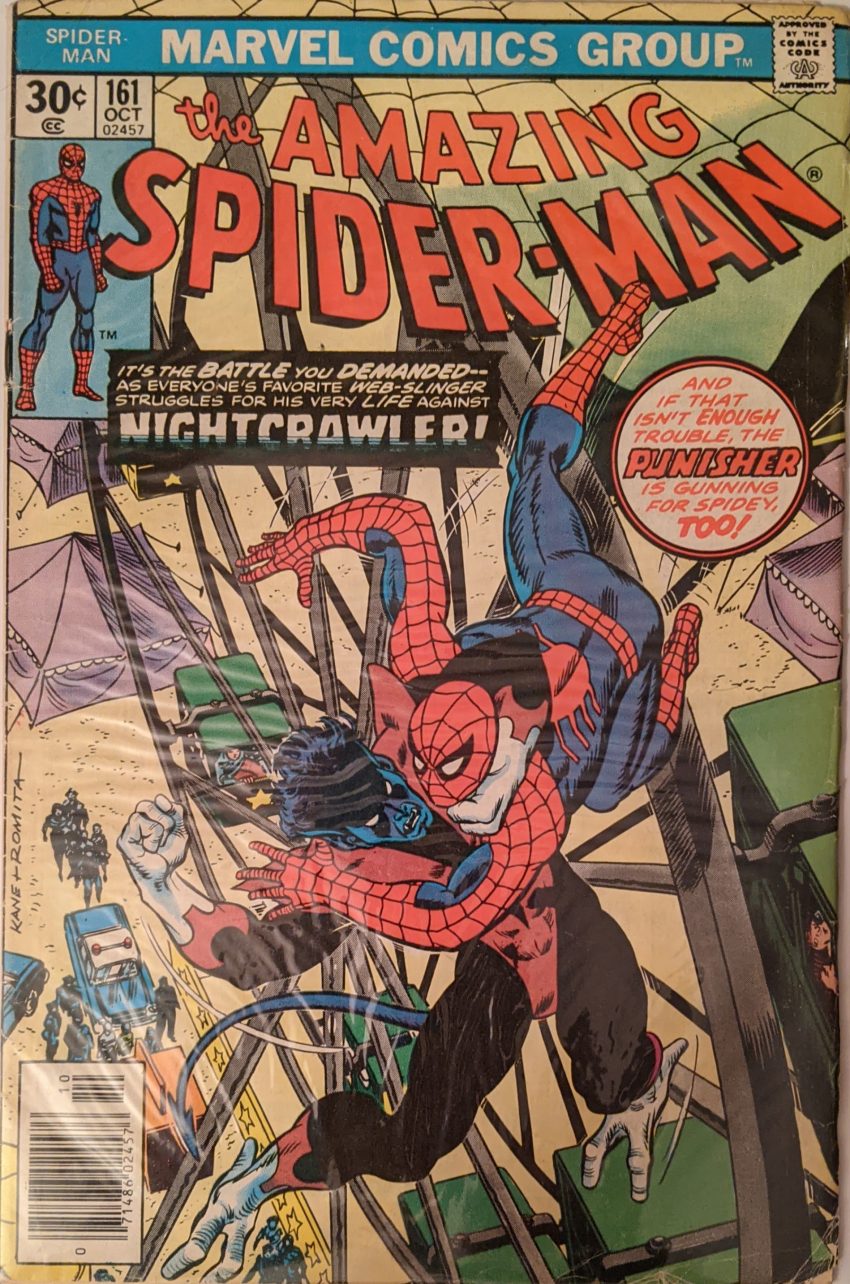 Whoever bagged this put a sticker on the back declaring its grade VGFN 6. Let it be known. If anyone were to ask me who my favorite X-Man is, I would answer without hesitation, “Nightcrawler.” Why? Because of this story. Not this issue, tho. I had reprints of this in issues of Marvel Tales as a kid. In a way, this is the first back issue I ever bought, tho I got a reprint. The cover looked exciting and won my dollar at the drugstore that day. And knowing very little about the X-Men, the one who showed up in a Spider-Man comic was obviously the best one. Since then, I’ve come to really like Nightcrawler on his own merits, and actually think he’s been badly misused and underused by the X-Office for most of the last 20 years, but I’d be lying if I said this isn’t where it started. Sort of. Let’s get to it! Nightcrawler is making the strange decision to read the newspaper in The X-Men’s Danger room while everyone’s doin’ their thing in there…

One big happy family, The X-Men! Certainly not a portrayal of either Wolverine or Nightcrawler you’d see today. But, this team had only existed for 7 issues, at this point. 8 issues ago, X-Men was still a reprint comic. Len Wein introduced this version of The X-Men, but also left the book almost instantly, paving the way for Chris Claremont to begin turning them into the sales juggernaut they would become in the 80s & 90s. This issue, in fact, hits newsstands the same month Jean Grey becomes The Phoenix.  Early days for the revitalized X-Men property.  As Nightcrawler takes off, Peter, Mary Jane, Harry & Liz are riding a rollercoaster at Coney Island. And for some reason, Spider-Man is about to lose his lunch on it.

As a wee lad, I didn’t know much about comics, but I was able to see this was the same guy who drew ASM 148 & 180, my oldest comics. So finding (the reprint of) this comic felt very important. A new window into that same mysterious timeframe as I was trying to get a handle on this whole Spider-Man thing. Ross Andru just feels so much more at home doing this regular people stuff than the superheroics. The little detail of MJ putting (presumably) mustard on her hot dog in the background. But, obviously, some superheroing is going to need to happen now. Peter runs off saying he needs to get photos for The Bugle. One of his more convenient excuses. As he suits up, we go back in time a sec to Nightcrawler, also at Coney Island. The man reported killed in the paper was an old friend of his, and he’s here looking into his death with he, too, sees he man shot off the rollercoaster. Only he catches a glimpse of the shooter, too.

Uh-oh. Time for Ye Olde Two Heroes Fight Over A Misunderstanding. Spidey obviously thinks Kurt shot that man, while Kurt remembers the paper calling Spider-Man a killer, and wonders if he was the shooter. As Two Heroes Fight Over A Misunderstanding goes, you could do a lot worse. They battle through the area as the cops show up, eventually chasing each other up the outside of the ferris wheel as only they could. As they do, Nightcrawler sizes up Spider-Man’s powers and begins to think he’s made a mistake, that a guy like him wouldn’t need a rifle. But then Spidey’s on top of him, accidentally making Kurt drop the rifle to the ground.

Battle concluded, Spidey heads off to the place he always goes for information, Joe Robertson’s office. Robbie tells him the cops want The Punisher for this series of sniper assassinations, but that none of the victims have criminal records, so it seems weird The Punisher would be shooting them. As they talk, JJJ almost comes in, but hearing Spider-Man, stops. Robbie says The Bugle wants an exclusive if Spider-Man learns anything, and Spidey says he’ll even let Peter Parker take the photos.

Dun dun duuuuun! JJJ has photos of Spidey disposing of his clone in ASM 151! But why? How? And how does this prove who Spider-Man really is? I don’t actually know, but I know when we’ll find out. Meanwhile, The Punisher shoots up a bunch of mobsters, leaving one alive to ask him who’s impersonating him and trying to destroy his reputation. If he learns anything, we don’t see it, as we rejoin Spider-Man, taking a break from swinging to sit on top of the Roosevelt Island Tramway to wonder what’s going on with The Punisher. Suddenly, Nightcrawler is upon him, so fast his Spider Sense doesn’t help. He chops Spidey in the throat and again in the head, all while apologizing, introducing himself, and saying their earlier fight was “a tragic mistake.” As he runs off with Spidey’s camera, he says he hopes one day they will be friends.

Our guys are in a tough spot! THREE Heroes Fight Over A Misunderstanding! It took me some time to finally find & read part 2 of this tale as a kid, but I did eventually. Here, tho, we’ll see it next post. In the letter column, Marvel has to defend itself for that coloring mistake in 157 that made Spidey’s pants disappear: