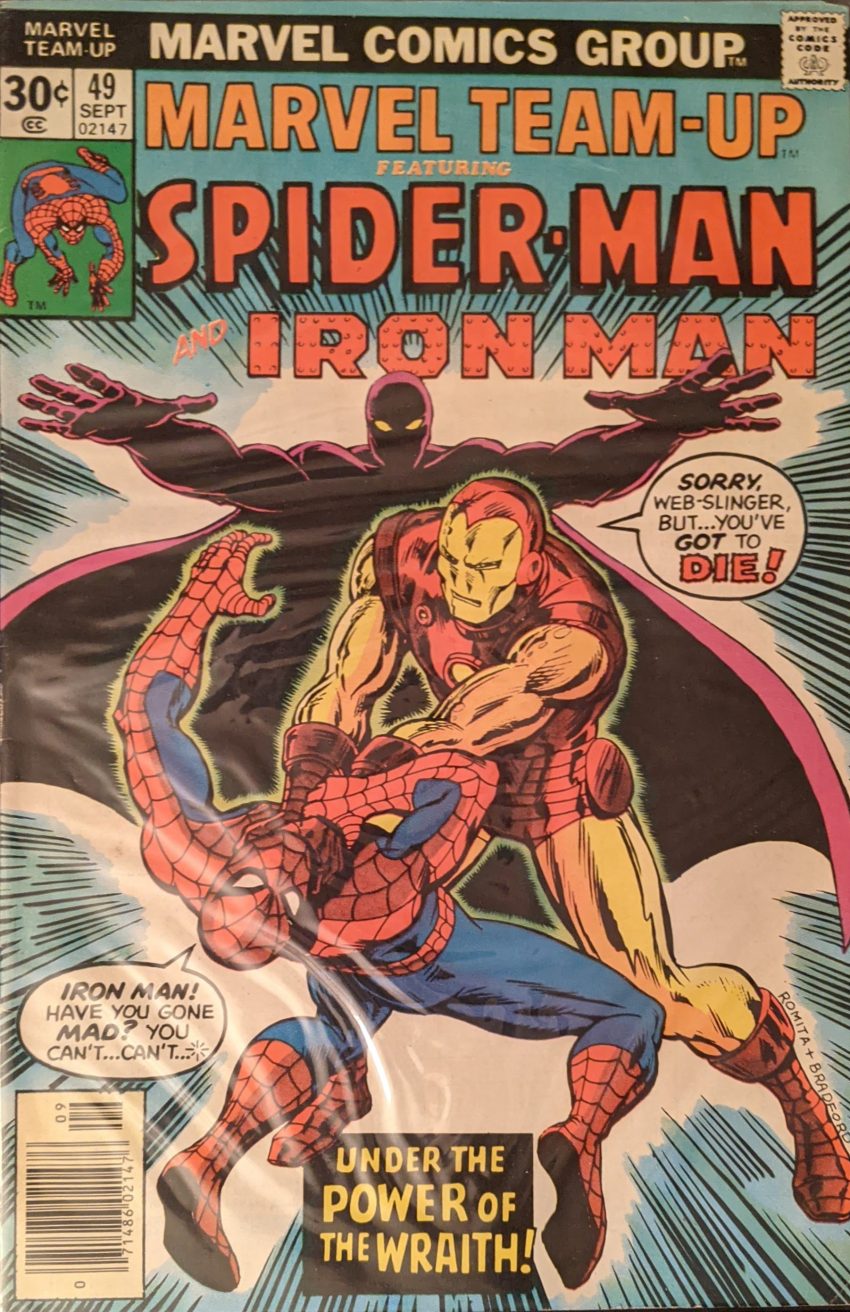 Unusual to see zip-a-tone like that on a Spidey cover, especially in this period. Looks cool, tho. So, after last issue, Iron Man is in a crater he made in the street, while Spider-Man is being held by The Wraith. IM hefts himself up out of the crater, but he’s pretty bad off. After all Iron Man’s been through, it seems pretty silly that a bomb strapped to t a toy plane could take him down. A cab driver hops out and tries to figure out how to get his helmet off to see if he’s breathing, but has no luck. As for Spider-Man…

But Wraith continues to manipulate Spidey as he falls, and when he hits the ground, he wakes up, realizing none of that even happened. This is all very Mysterio-ish. Across the street, Jean DeWolff takes some shots at The Wraith, who turns his power on her.

The Wraith has a very 21st Century costume design with the piping down the sides and such. Wraith once again takes control of Jean, preparing to have her shoot Spider-Man, as down on the street, Iron Man finally gets his feet under him. This random cab driver is a pretty cool guy.

The Wraith makes the heroes think he’s disappeared, and also crash into each other, before taunting them one more time and then hitting them with a smoke bomb, ensuring his escape.

I know Jean’s dad is a former police commissioner, but even so… servants? Where’d he get so rich?

Well. That rather gives the game away, doesn’t it? Spidey and Iron Man come in as her dad leaves, wanting to help her get to the bottom of this. She still believes her brother is dead, and even if he wasn’t, she says she had a good relationship with him and he would never do this stuff. She recounts how he was always supportive of her even as her father was so dismissive, and then how he died in a shootout with the mob, lured into a trap while on patrol as a cop.

This issue includes a letter from Mark Gruenwald, who is concerned with the finer points of continuity. His trademark as a fan and as a creator!

Huh. Odd page layout, especially from Sal Buscema. Guess he really wanted to draw Dr. Strange. And I guess Mantlo is settling in for yet another long arc in this title. This one’s pretty compelling. This is great introduction for Jean. We’ll see how it develops next issue.