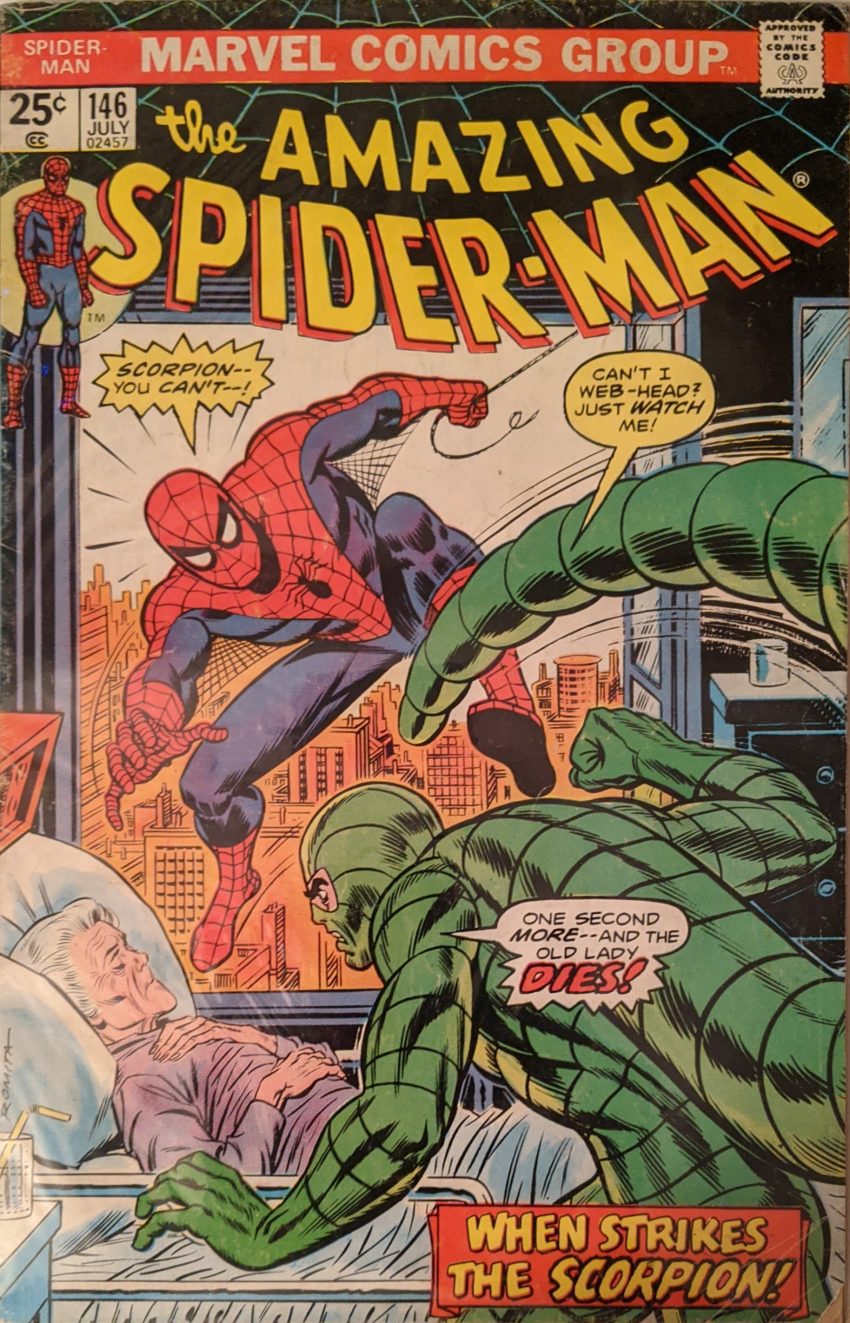 A caption on page one notes this ends Gerry Conway’s 3rd year on the title. They say it’s all downhill from here. I wonder if they knew 149 would be his last issue at that point. This one credits the inks to “J. Romita & The Gang,” and opens with The Jackal talking to a bust of Spider-Man.

Two years? That doesn’t sound right. Why does he need the little undies? Are we meant to believe that’s his real fur?

Two years? That doesn’t sound right here, either. Marvel time hasn’t yet compressed much, I guess. But on the other hand, Conway keeps saying Gwen died “months ago.” Now it’s 2 years. That would mean Peter’s almost done with college, and I know he’s not going to actually finish for another 40-some issues. I guess the Spidey timeline is juuuust about to get wonky. But, hey, both characters bringing up that 2-year timeline seems like something, doesn’t it? Anyway, Gwen kisses Peter goodnight, and is dismayed that he seems to hesitate. It’s because he’s finally fallen for MJ, just in time for Gwen to come back. He walks off pondering this, feeling bad, and switching to Spider-Man so he can swing home. Also, a caption lets us know Gwen is staying with Betty Brant, in case you, like me, were wondering where she could be living. Betty seems a weird choice, but I don’t have a better one. MJ, I guess, but I gather that would be bad for the plot. Meanwhile, The Scorpion breaks into the Monticello home of a gang leader named Santonio, disgusted by how easily his goons go down.

Taking over mob territory seems way outside Scorpy’s wheelhouse. Scorpy rushes out to re-kill Spider-Man, but is ambushed by The Jackal, who wants to let him in on a plan to destroy their mutual enemy. The Jackal sure gets around. He’s manipulated The Punisher, Hammerhead, Doc Ock, and now Scorpion in recent issues. Meanwhile, Spider-Man has broken into Scorpion’s parole office, found out where he’s been living, and then breaks into his hotel room, where he finds the money he stole in the closet and calls in a tip to the police. Then he goes to check on Aunt May.

Uh-oh. Man, it’s crazy how easily you can tell which parts of a page were inked by Romita in this issue. Scorpy swats away Peter and demands to know where Spider-Man is from Aunt May, but why would she know, so she passes out. Scorpion sees this isn’t getting him anywhere, but Jackal told him Spider-Man would be in that hospital room, so he starts just ripping the doors off random rooms looking for him. Sound strategy! Then Spidey finally shows up to give him someone to fight.

Rather random insults to the writing on The Tonight Show. Got a beef, Gerry? Ya don’t mess with Aunt May, folks. No amount of stress and fatigue is going to keep Spidey from defending her.

Spidey loses the Scorpion, and has to swing around hoping his Spider Sense will go off. In the meantime, he thinks about how Scorpy mentioned The Jackal, and is becoming worried that The Jackal knows his secret. Then he finds Scorpion scaling The Chrysler Building for some reason, and begins pummeling him some more…

Now there’s a unique ending! The story of The Jackal is going to pick up steam soon, but we’ve got a couple of detours before our next issue of ASM, so hang in there. Also: the Value Stamp was intact in this one. I know you were wondering. How many have I lost so far, 2? I think 2.