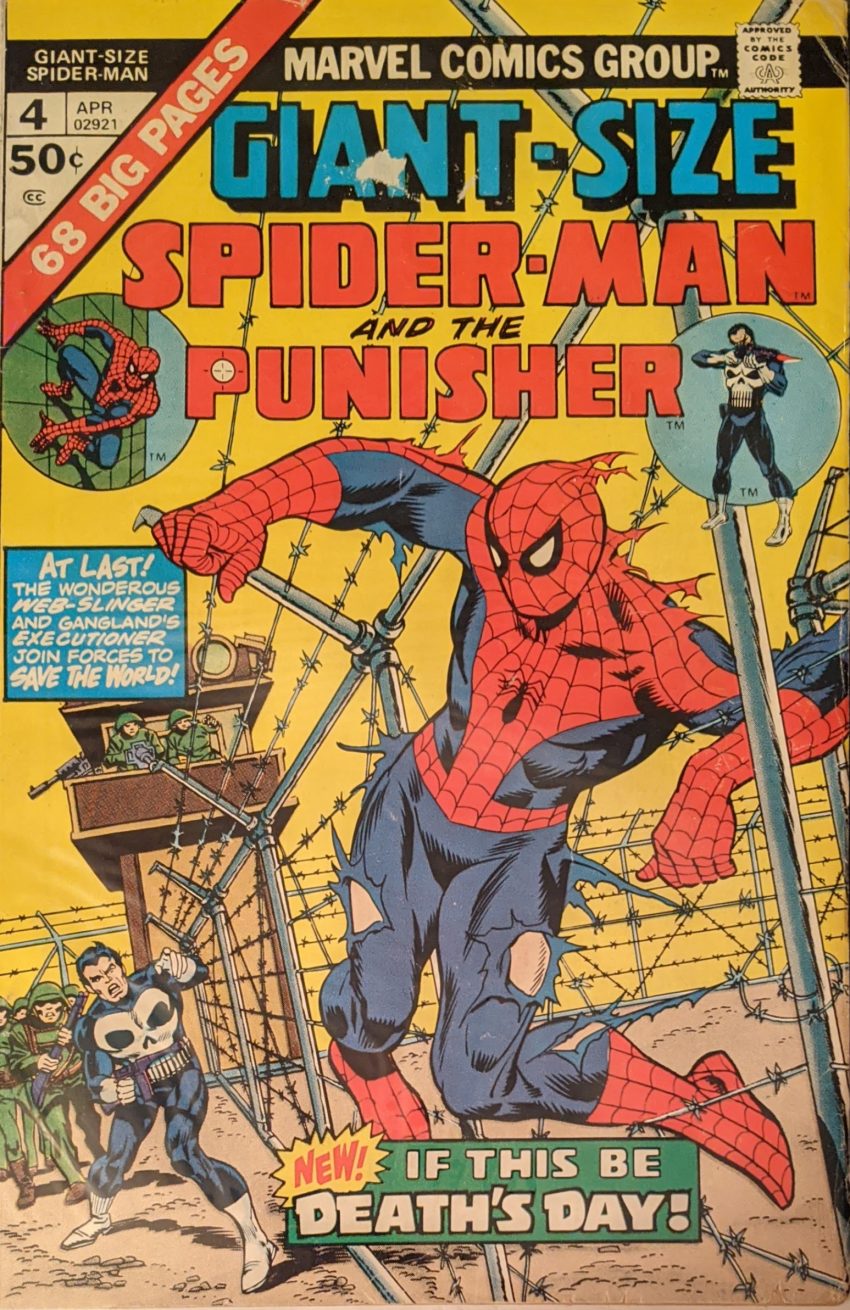 Time for Spidey’s 3rd adventure with The Punisher. Spider-Man has seemed uncharacteristically cool with Frank so far, and this cover certainly seems to indicate that will continue. But also, what’s going on here? Why is he… sort of, not really stuck to that fence? Is the whole butt torn out of his suit? Weird cover. This one’s brought to us by Gerry Conway, Ross Andru & Mike Esposito. This one was published alongside ASM 144, but needs to go here for continuity reasons. Yet another month where Andru drew 50 pages of Spider-Man. Crazy stuff, man. This one wastes no time getting to the action, as Spider-Man is already leaping into a guy on page 2:

Holee crud, indeed. Spidey has no trouble with his three opponents, even the one who boasts that he was on his high school wrestling team, but there’s a 4th guy Spidey doesn’t see. And then…

Still AWFULLY cavalier about a dude getting shot in the face. Then the cops show up, so Spidey makes his exit. Then we check on The Punisher, and he updates his endless War Journal driving back to his base of operations, now in some kind of abandoned power plant. Somebody followed him home, though:

Punisher lets Spider-Man in on his business. He says a US company has been selling a deadly toxic gas to guerrillas in a South American country he hasn’t yet identified. He has footage of the gas being tested on kidnapped people, like the girl being kidnapped tonight, and having the flesh melted off their bones. Spidey flies into a rage, as if Punisher is somehow to blame for the footage they’re watching, telling The Punisher he’s just like these killers as Punisher hits him with a tranquilizer. Then we jump ahead to Punisher & Spider-Man in Punny’s van, approaching the offices of the Deterrence Research Corporation, where Punisher says the gas comes from and where Spider-Man has agreed to help him break in. What? None of that made any sense. Chapter 2 begins with Punisher smashing through a window at DTC and just shooting people:

Spider-Man’s outside, running up the side of the building, just going along with it. This seems wildly out of character. Punisher mentioned he got a homing device on the head of DTC, the spectacularly named Moses Magnum, and Spider-Man has followed that signal to the floor he now breaks into.

Magnum has a whole room full of guards, though, so it’s fightin’ time. We cut to Punisher barely defeating a huge dude on his way up before checking back in with Spidey. It’s not going to well:

Magnum and his goons fly off, theoretically with Spider-Man, in a spaceship-lookin’ craft. Punisher sees this and says things are going according to plan. Then, the next day, Spider-Man is dumped in a camp with other kidnap victims. Spidey is befriended by a father & son from the American South who insist on calling him “y’all” (40 years living in the south, I have never heard anyone call a single person “y’all,” but it’s so common in comics, even today). Then he’s told Magnum wants to see him. He beats up the goon who comes for him, but a 2nd goon takes the kid hostage, so Spidey has no choice.

Wait, what? This is ridiculous. I’m glad he took the time to comb his hair before putting his mask back on. When night falls, Spider-Man pulls up the floorboards of the barracks to reveal The Punisher, having tunneled in, or something. Punisher’s brought gas bombs and extremely weird looking gas masks, and now it’s time to close up shop on this operation.

But do we fight? Punisher shoots a whole bunch more dudes as Spidey webs up a bunch, never once commenting on the body count. Then Punisher gases most of the army as Spider-Man finds Moses Magnum in his fortress. Magnum proves remarkably strong, almost breaking Spidey’s back the same way Bane would later break Batman’s. That’s one way to get his attention.

Boy, is he gonna feel foolish saying Magnum’s death is “a certainty” TWICE when Magnum shows up alive with earthquake powers later, fighting the likes of Luke Cage, the X-Men, and even The Avengers. When is Spider-Man ever going to start getting mad that The Punisher executes people?! This is really weird stuff, man, I have only ever known Spider-Man to get furious when Punisher tries to kill people in later appearances. He’s totally on board in these early stories. The rest of the issue reprints Amazing Spider-Man Annual #2’s first team-up between Spidey & Dr. Strange. I’ll cover that some other time. I used “mosesmagnum” as an email for awhile back in the late 90s, in spite of not being too familiar with him. I liked how weird the name was. That’s your useless fact about me of the day!